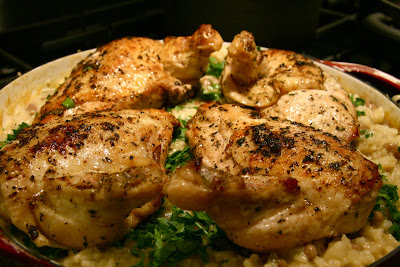 For the past few months my freezer has been holding a carefully wrapped package of 4 boneless "airline" chicken breasts (boneless breasts with the bottom wing joint attached) that I purchased at a specialty market, figuring I'd find a good recipe for them. When I saw this Tyler Florence recipe for Roasted Airline Chicken Breast I decided to try it. It took a couple of weeks to get to the actual cooking, and during that time, the anticipation built. The recipe sounded so good; I was intrigued by the combination of black eyed peas, bacon, rice and chicken.

- I've cooked (mostly) low fat for around 20 years. Using large quantities of things like butter and cream tends to give me the willies, though I'll make an exception for special occasions. But when I'm trying new recipes regularly and they call for significant amounts of bacon fat, butter, or cream - or in this case, all three - I'm just going to have to cut fat. So I trimmed back the ingredients in this recipe where I could, but there was still plenty of the rich stuff.

- I used about half the bacon amount - the Benton's bacon that I use has quite a strong flavor. Tyler's directions call for cooking the bacon in olive oil. He's done this in other recipes, and I'm guessing this step is meant to built flavor layers (it's not like bacon is lacking in fat or anything!) I used about half the olive oil. Note: bacon does not get "crispy" in 3-4 minutes of "slow" cooking.

- My first instincts were to halve the the rice part of the recipe, and I should have listened to that little voice. There was way too much risotto for 4 pieces of chicken - the amount was more like 8 servings of rice. I ended up giving some to my neighbors; and they really liked it.

- I'm never very confident in my risotto technique, and in fact, I'm not so sure I'm even temperamentally suited to making risotto.

- Tyler's recipe uses butter, parmesan and heavy cream to finish the rice. I skipped the butter, reduced the cheese, and used 1/4 cup half-and-half instead of 1 cup of cream. Even so, the rice was plenty creamy. 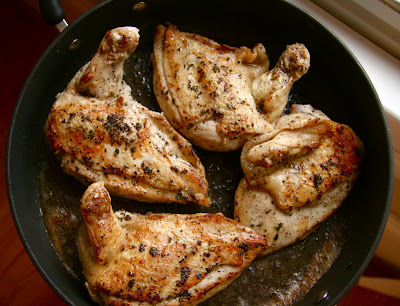 This chicken smelled amazing while it was browning!

I had been eagerly anticipating this recipe and the bottom line is that I was disappointed. It wasn't a total bust; this was a tasty chicken + rice dish. We enjoyed it the first night and we enjoyed the leftovers all week (lots of rice!). But it wasn't spectacular, especially given the two major strikes against it: (1) it's exceptionally heart and waist unfriendly - tons of butter in the chicken, and bacon/cream/butter/cheese in the rice, and (2) it's unusually labor-intensive for my style of cooking. Without huge payoffs in the taste department I'm not likely to take the trouble of cooking it again.

On the positive side, I loved the taste of the fresh thyme + black pepper compound butter, so I might play around with those flavors in a simplified olive-oil based chicken dish.

I'm sending this off to Tyler Florence Fridays, a weekly roundup of blog posts that feature Tyler's recipes - check it out to see what everyone's cooking up!
Posted by Nancy/n.o.e at 10:08 PM

It does sound like a very decadent dish. Risotto with cream sounds interesting. I don't think I would make it--I like my decadence in the form of baked goods and ice cream--but it sounds like it would be delicious. The chicken looks good too.

I'm sorry that this disappointed you. It does look delicious, though! I'm glad that you got a chance to make this dish, and I'm glad that the flavor combo worked out!!

Oh No ! Don't tell me Tyler could disappoint !!! I'm joking I cab see there was much too much fat in this recipe we don't use that much fat either (and before joining TWD I never used so much butter in my life !!) I've never used cream in risotto and if your problem is the constant stirring there is a school of thinking (?) who doensn't stir !!

So sorry you were disappointed in this one. The chicken looks good, I didn't know the term "airline" chicken before.

Whoa - those sounds you hear are my arteries hardening from that dish. Kudos for going out a limb and trying something totally different - but I can see why it wasn't such a hit with you.

I have never heard the term airline before either. I'm glad to learn something new. The picture looks very tasty, I understand what you're saying about the high fat/calorie content. When you eat something that is bad for you then you really want it to be an A+. If it is just okay then you are dissapointed.

It looks good but wow the fat and calories would make me cringe too! Even with all your lightening up. I am lerning lately how much I like thyme.

how disappointing that you were disappointed! But it looks wonderful! I've never heard of airline chicken...not that you've ever get anything like it on an airline!

I admit I don't get the cooking bacon in olive oil thing either - I usually skip it. If I'm cooking bacon, I want to taste bacon, not olive oil!
Chicken sure looks good though.

I'm sorry it was a bit of a letdown. It looks real good and does sound a bit indulgent. I like your healthier adaption.

I'm sorry you were disappointed in this dish.

It looks delicious and perfectly prepared!

Do you think it would have been better if you had made it full fat like he called for? Maybe this is a dish that doesn't lighten up well.

Curious what it is about risotto that you think you're temperamentally unsuited to make it?

I share your feelings on high fat/high butter recipes. We cook low fat in general too, and it always is a bit of a shock to make and then eat a dish like this. I somehow find a way to get used to it though.