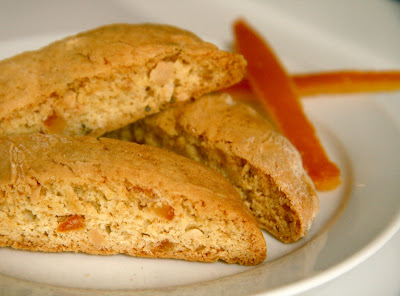 I've joined Sweet Melissa Sundays, a new group whose purpose is to "cook the book" - the book in question being The Sweet Melissa Baking Book. This lovely cookbook has been sitting in my house for nearly a year, and I have never made anything from it. So I just had to join, right?

I don't think I'll be able to bake each of the chosen confections (and blessedly I am only required to participate once a month) but the cookbook has some great sounding sweets (not very many pictures!) and this gives me a reason to dip into a book that would otherwise be collecting dust on my shelves. The bonus: I get to start with the group's first week!

Sweet Melissa's Patisseries are two bakeshops in Brooklyn, NY, and the goal of founder Melissa Murphy is to make "everyone's favorite desserts better than they've had them before." A worthy goal, and if I find a few "best versions" of common recipes, I'll be thrilled.

This week's recipe is Honey Beescotti, a crunchy biscotti cookie flavored with - what else? - honey. But also almond, caraway seeds, and candied orange peel. Melissa advises buying the candied peel, but Lorelei posted some helpful links for how to make homemade candied peel. Frankly it was easier than going to the store to buy any. 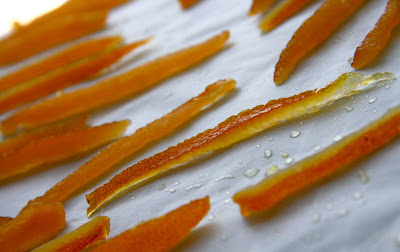 - I made no real changes in the recipe.

- For the orange peel I followed Giada's recipe from the Food Network site. It was really easy. Instead of using a vegetable peeler to remove just the outside portion of the peel, I scored an orange, from stem to stern, with 6 cuts. Then I peeled off each sixth of the peel in one piece, pith and all. This was pretty easy to do with the blood orange I was using. I reserved the orange and sliced the peel in long strips about 1/4 inch wide. (Using the white part is fine because the repeated boiling takes the bitterness away) Instead of boiling the peel twice in plain water, I boiled a third time before heading on to the sugar stage. Once it was done, the peel tasted like a slightly sweet version of orange peel but without bitterness.

- I have a whole drawer full of nuts, seeds and dried fruit, yet invariably I never have the correct nut that a recipe specifies (salted or unsalted, roasted or raw, chopped, slivered or whole, etc). I used lightly roasted, lightly salted marcona almonds, which I lightly chopped.

- I used mesquite honey because I don't have chestnut honey.

- I had a big internal debate about whether to use the caraway seeds. My husband is not a fan of the seeds. I'm OK with caraway seeds in Jewish Rye (although I love it without seeds also), and in coleslaw, but biscotti? But in the end I decided to try the seed and see if, under the influence of the candied peel and the almonds, it magically transformed into a marvelous taste sensation. I had a measuring mishap with the seeds, but as best I can tell, I used about half of what the recipe called for.

- The dough was very very soft and sticky. Somehow I missed the step about refrigerating the dough before forming the logs. I sprinkled flour liberally and used parchment to help form two dough logs at room temp. Than I popped them in the fridge for an hour then froze the logs for about 30 minutes. They went straight from the freezer to the oven.

- The first bake was at 335 degrees for 25 minutes, at which point the logs were nicely golden. I've got to say, my kitchen smelled delicious. 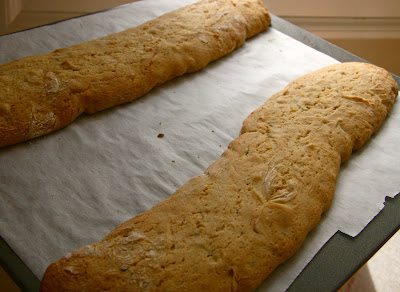 - The second bake was in a 260 degree oven for 25 minutes, turning the baking sheet halfway through.

Even though it's still Lent, I did sample a bite or two the biscotti so I could give a verdict. I know that my husband won't like them because of the caraway; it's not a flavor he enjoys in savory food so he'll not be excited about finding it in his sweets.

I think the chewy orange peel tastes fantastic in the biscotti. Even though I'd reduced the amount of seeds, the caraway kept fighting with the other elements and those times where it seemed to be winning, I didn't like the way it dominated the taste.

The biscotti were dry and firm but not hard, which makes them perfect for dunking in coffee because they hold together. (But the coffee seemed to emphasize the caraway taste.) 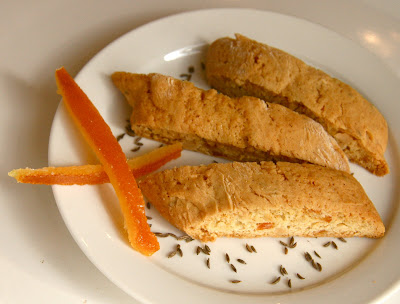 Well, truthfully, these are not the best biscotti ever. But they're still very good. I would make these biscotti again - without the caraway.

I loved making the candied peel, and will be doing that again, with other types of citrus. I've got a few leftover pieces of candied orange peel, which would be fantastic dipped in bittersweet chocolate. Right after Easter I plan to do just that. The syrup that's leftover from boiling the peel is going to be used to sweeten iced tea.

Lorelei of Mermaid Sweets chose this for our inaugural recipe, and you can find the recipe on her post, or you could buy the book and cook along with the group too!
Posted by Nancy/n.o.e at 9:18 AM

They look great! I loved this recipe, not too sweet. And I am with you - making the candied orange peel was a revelation.

And that's why I left out the caraway - it does tend to overpower other flavors.

Anyways, one more week and then you'll be back to eating everything you bake - yeah!

Your biscotti look great! I'm with you: making the candied orange peel was half the fun! It added such great flavor. I'm glad you asked (because I completely forgot to mention it in my post): I did leave out the caraway. I'm not a huge fan of their flavor (except in rye breads). Great pictures!

I agree that these are great for dipping in coffee. I haven't really gone out of my way to eat them plain after the first one that I tried. I've never heard of mesquite honey before but I'm super intrigued. We have mesquite all over the hill country in Texas. I'm going to Austin in May for a christening and I'm making a mental note to look for some! I love the nice pieces of orange peel that are scattered throughout the biscotti. The orange peel was my favorite part of these.

I made mine without the carraway - judging from everyone's posts (no one was thrilled with the seeds flavor) I'm glad I did! Without them the cookies had a very nice taste. You should try them again without them! Your cookies look so pretty! Love the photo of your peels!

Your biscotti look wonderful. I thought these had the perfect biscotti texture--hard and super crispy. I just wasn't a fan of the taste combinations. I may try making them again without the caraway seeds.

Yep I agree loved making the candied orange peel. Your biscotti looks great. Im so glad you joined the SMS group. I love any excuse to bake !

I've never even seen this book! But although there's something so peaceful about baking on Sundays, I'm going to join vicariously, and admire from afar!
Audrey

Your biscotti look yummy! I really enjoyed this recipe but I left the caraway seeds out so I didn't have that element competing with the other flavors. And you're right, the candied orange peel was so fun to make! Looking forward to baking with you!

It looks wonderful and I suppose the first time - you just follow the recipe - unless you know it has an ingredient that won't go over. Not joining the gorup but would like to add this biscotti recipe to my collection. So, "to caraway - or not to caraway?" That will be my question.

Nancy, your biscotti are beautiful! I used Giada's recipe to candy the orange peel as well and loved it. What a fun kitchen experience. Glad to be baking with you another time during the week :)

Your biscotti look perfect. I agree that making candied orange peel was a great part of the experience. Looking forward to another fun baking group!

Another baking group -- how fun! This looks like a really great biscotti. It sounds like it was a worthwhile undertaking for the candied orange peel alone. Sorry the caraway detracted from the finished product for you a bit, but at least that will be an easy fix next time around! These look delicious!

Looks great. What a great way for your group to start out! Everyone's biscotti's I've seen today look fantastic!

Your biscotti look great. Yeah, I know caraway is a strong flavor. I happen to love it, so these were amazing to me! Thanks for joining and baking along.

Awesome! Yours looks so nice and golden!

My boyfriend isn't the biggest fan of seeds either but even he didn't notice the presence of caraway seeds in there :D

I look forward to baking with you in future :)

Sounds like a great book. Honey biscotti sounds different. I'd give it a try.

Nancy, this sounds so good! I love carawayl