Broccoli with fried shallots and olives 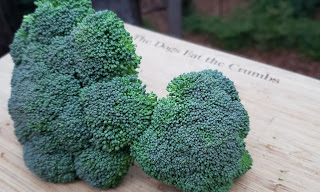 My father always combed the food pages of the New York Times and clipped recipes for my mom to try.  I have copies of some of those recipes, most notably, the Dutch baby pancake known and revered by Times readers as David Eyre's Pancake [my post is here, the recipe is here]  And I have recipe clippings of my own, from the many years when the Sunday Times appeared on our doorstep each week.  The Wild Mushroom and Green Peppercorn Meatloaf has been a family favorite for at least a quarter of a century.

These days we don't subscribe to the newspaper but I follow the Cooking Section and several of the Times food writers on social media.  The recipes and food articles are behind the New York Times paywall, so I clicked sparingly to use my monthly allotment of free recipes.  Then I realized that the Times offers an annual subscription to their recipes on the New York Times Cooking site - also available as an app.

I was delighted when Santa brought me a subscription for Christmas last year!  And I have loved discovering new recipes as well as exploring ones from their extensive archives.  In fact, I enjoyed the gift so much that I requested a renewal for Christmas this year.

This week my friends in the "Good Friends Good Food" blog group are all cooking a "holiday green vegetable."  The theme was chosen by yours truly, and even though I have been rather spotty in my group participation, I was happy to get in the kitchen with my fresh-from-the-farm-box broccoli and a recipe that the New York Times had recommended for Thanksgiving.

-  Here is the recipe from The New York Times Cooking site.  (It is behind a paywall, but I think you can access several free recipes/articles from the Times each month.)  It's a Melissa Clark recipe, and her food is reliably tasty.

- The recipe has you fry shallots in olive oil for the topping, and the blanched broccoli is combined with olives and sliced garlic, and tossed with the shallot oil and optional sherry vinegar (to brighten the flavor, as Melissa Clark says).

- I steamed rather than blanched my broccoli.

- The comments on the online recipe were helpful, including a suggestion to add a sliced almonds, browning them with the olives and garlic.

- I did toss with the optional sherry vinegar at the end, and would do that again.

We really loved this recipe!  It had a lot of depth of flavor, earthy from the olives, slightly sweet and toasty from the shallots, crunchy from the almonds.  I can see it at as a side dish at a holiday dinner where the main is a simple roast.  But maybe not if there are a lots of competing sauces and flavors on the plate from multiple dishes.

You can see other green vegetable posts from the bloggers of GFGF by visiting their blogs: Kayte, Peggy, Margaret,  Ulrike, Donna, Ellen