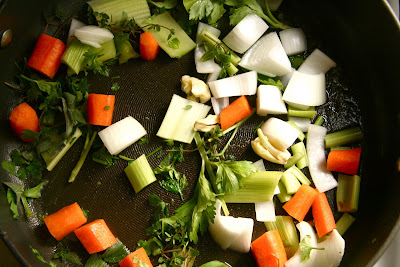 I don't know about you, but every Thanksgiving, as I tuck into my favorite meal of the entire year, I find myself wondering why I cook turkey + gravy only in November (and sometimes at Christmas). "This year," I always say to myself, "I will make turkey more often." And although I usually fail pretty miserably in that resolution, this year I actually followed through. Which is pretty cool in many ways, but it means that I'm writing a post featuring turkey gravy after Easter!

Back in January, my farm box had some turkeys available for order - local, organic, free-pastured birds. I'd cooked one of these birds for Thanksgiving dinner, using Tyler Florence's recipe. It was the best turkey I've ever eaten, so I jumped on the chance for a repeat performance. The turkey that I picked up in January was 24 pounds! I again used Tyler's method to cook the turkey, and it was delicious, although it was a little comical to prepare such a huge turkey when there are just 2 of us in the house. We enjoyed a few turkey dinners that week, and then froze an entire turkey breast, 3 quarts of stock, turkey drippings (measured in 1/4 cup packets), and a passel of Ziploc bags filled with turkey meat, ranging from full slices down to little scraps.

Gotta love all that food in the freezer! I recently stumbled across Tyler Florence's recipe for Sage Green Peppercorn Gravy and decided to cook it, even though I didn't have some of the ingredients: turkey giblets or smoked turkey wings. So I improvised, using an assortment of turkey items from my freezer instead!

-I prepared a half recipe, making several changes to Tyler's recipe. My adapted version is at the end of this post.

- To compensate for the fact that I didn't have smoked turkey wings available, I added a smoky note in two ways:
1. I used some reserved bacon grease from fabulously-smoky Benton's bacon.
2. I also stirred some smoked salt into the nearly-finished gravy. I order the smoked salt (and the equally wonderful hot salt) from a little spice purveyor in central New York State.

- Since I had no giblets to chop and add to the gravy, I used small scraps of cooked turkey and some turkey drippings, both from the freezer. 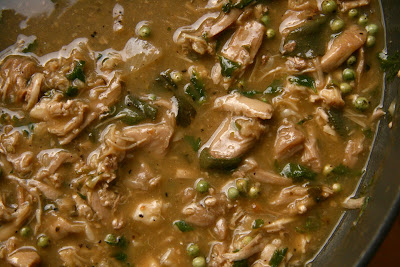 I served the gravy with some of the leftover Tyler Florence turkey slices (yup, in my freezer.) The resulting dish was totally delicious! The gravy's flavor was complex and subtle; the smoky touches and the cognac added an understated sophistication. Luckily we had some Sister Schubert's rolls to catch all of the gravy goodness on our plates!

Now, tuck this recipe away for Thanksgiving - that's what I'm going to do!

adapted from a recipe by Tyler Florence.

Melt butter and bacon grease in a large skillet over medium heat. Saute the onion, garlic, carrots, and celery with 2 sprigs each parsley and thyme, 2 sage leaves, and 1 bay leaf until fragrant (about 5 minutes). Deglaze the pan with 2 T. cognac and cook for 2 minutes to evaporate the alcohol. Sprinkle in flour to tighten up the mixture and stir in the chicken broth a little at a time to avoid lumping. Simmer for about 15 minutes, until slightly thickened. With a slotted spoon or strainer, remove the pieces of vegetable from the broth.

In another pan, heat the turkey drippings. Add the remaining herbs. Season with salt and pepper and heat over medium heat. Add 1 T cognac and continue to cook until ingredients are hot and well combined and the cognac has evaporated.

Add the seasoned drippings and the turkey scraps to the broth mixture. Deglaze the dripping pan with 1/4 cup water, and add to the gravy. Simmer until the gravy is thick enough to coat the back of a spoon. Stir in peppercorns and serve with turkey.

I'm sending this post to Tyler Florence Fridays, a weekly blog event featuring the recipes of Tyler Florence. Check out the roundup to see what the Tyler-istas are cooking up!

I always say the same thing on Thanksgiving. I love a turkey dinner with all of the fixings, I don't know why we only eat it once a year. Your post is fantastic, the gravy looks out-of-this-world delicious, and I'm craving Thanksgiving dinner.

And you get so much mileage out of a turkey too! There are always so many leftover that it really IS comical.

Yes, I always say that after Thanksgiving dinner too!!! (after I wake up from my nap) There really is no good reason not to cook turkey more often. And with gravy that sounds as wonderful as this one, my non-Thanksgiving turkey dinner will be even better than the Thanksgiving one. The vision of you cooking a 24 pound turkey for two will make me chuckle all day. Sounds like you made excellent use of the leftovers, anyway!

I'm envious of your farm box. You always get wonderful things in it!

(although I must say that my favorite part of the TG meal is mashed potatoes and I do have those through out the year. :P )

You know, I love gravy. I don't eat it nearly enough. It's good with so many things, and it's a perfect way to dress up leftovers. Yes, you've convinced me. I need to make some gravy!

I love Thanksgiving food, and you're so right, why should we only get to enjoy it one day of the year! That was also my mentality when I made the cranberry sauce last week. This gravy looks amazing, it is definitely bookmarked for Thanksgiving...or at whatever point I choose to make turkey.

Yum! The gravy looks so good I think I could eat it any time of year!

i love the idea of the farm box. i'm going to look into seeing if there's anything around me like that.