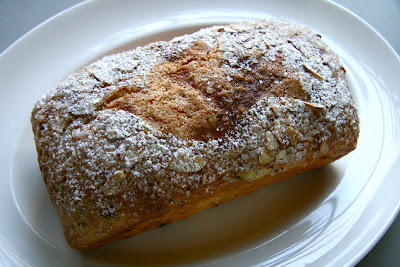 Early in Lent, I saw King Arthur's recipe for Colomba Pasquale, a rich Italian Easter bread baked in a beautiful metal dove-shaped pan. (Now there's a specialty pan if I ever saw one.) More commonly, Colomba is baked in a sturdy paper dove pan. King Arthur helpfully suggests that in the event you lack a dove pan to bake your bread in, you can make a free-formed loaf which you can shape into a dove, or, if all else fails, a simple loaf pan will do the trick.

I printed the recipe, and resolved that I would bake the Colomba bread for Easter. Then I found out that there was an online baking event celebrating the venerable Colomba. The event announcement was made here:

Participation for this event is fun and easy: bakers are free to use Colomba recipes of choice, and post their versions of the bread on their blogs by the end of April 18.

- I don't have a dove pan, (I do have a silicone pig pan, but it just isn't the same!) I briefly entertained the idea of making my own dove pan (my Italian blogging buddy Natalia helpfully sent me a link showing how. After I made my bread I saw that a Dutch blogger, Lien, made a slide show on her Colomba post which demonstrates how to make a dove mold.) In the end I decided to go with two regular baking pans. 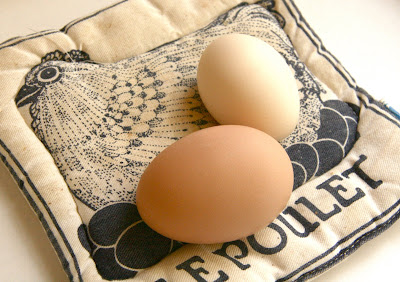 - This recipe starts with a sponge. I mixed up the sponge ingredients, using the recommended SAF Gold yeast. Once it doubled, I put it in the food processor, adding the other ingredients. For flavoring the dough, I used a total of 1 tsp orange zest, 2 tsp lemon zest and 2 tsp vanilla extract.

When the peel was cooked and cooled, I chopped it fine and added some candied blood orange peel left over from my recent biscotti. I measured out 1/2 cup of the chopped peel and added 1/2 cup of chopped golden raisins. 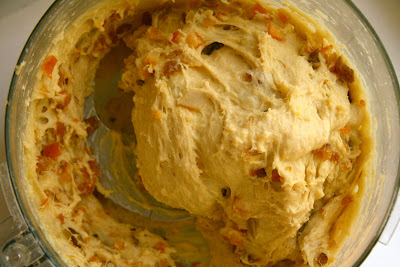 - I was expecting the dough to take a couple of hours to rise, but in the warm spot on top of my stove it doubled in 1 1/2 hours. 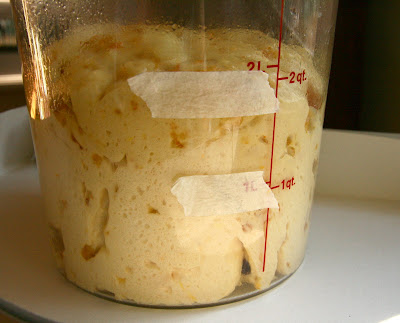 - I divided the dough in half, and put in a loaf pan and a round deep springform pan. 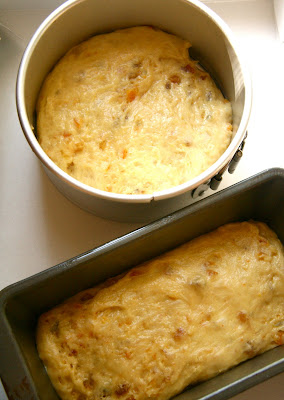 - The dough took about an hour and a half to crest the pan!

- The recipe calls for a meringue type topping, made from whipped egg white along with sugar and ground almonds. My egg white would not whip in my mixer, so this was sort of a disaster for me. I eventually brushed on a very thin layer of the topping. Next time I'll use my mini fp to make a topping.

- I made a dove cutout out of waxed paper and tried to sprinkle the sugar and the almonds around it, leaving a dove shape in the middle. Well, that was a total bust, so I popped the pans in the oven. 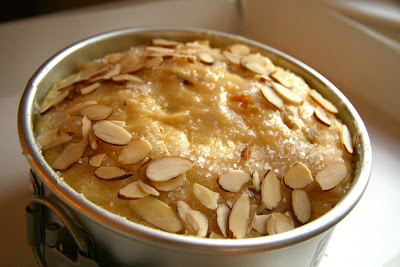 - The breads rose beautifully in the oven.

- When it came time to release the loafs from their pans, the loaf baked in the springform pan stuck to the sides of the pan just a bit. We let it cool for about half an hour, then ate it slightly warm. The two of us easily downed half of one loaf (and would have eaten more but I wanted to photograph it the next morning in daylight! 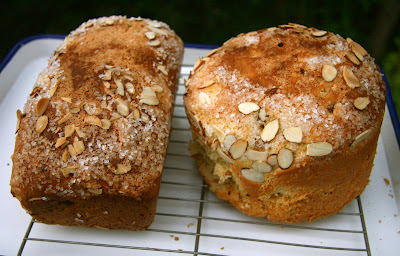 - My attempted dove didn't show up very much on the finished loaf - if you look really closely at the loaves in the picture above (and use some strong imaginations) you might be able to discern a dove shape on the top of each. Or not!

- I put my little stencil over the loves and sifted confectioner's sugar all around it. 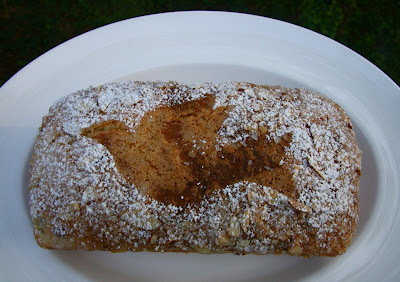 There: now you can see the dove! 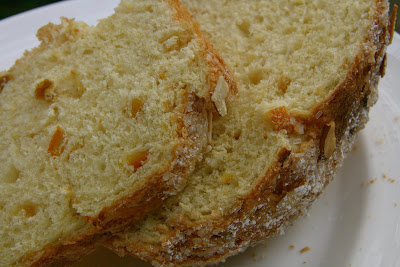 This bread was soooo good - tender and plenty moist, with a great subtle fruit-and-citrus flavor.

Comparing this bread to other rich fruit-filled yeast breads that I've baked:
We liked it better than the hot cross buns, and better than the most recent batch of kugelhopf.

The SAF Gold yeast did its job very well, making this bread rise quickly and successfully for me. Aside from the meringue issue, this wasn't a very difficult recipe, and I can see myself making this one again, and maybe I'll make a dove mold!

I'm sending my Colomba to "Cindystar" (Italy), host of the "Easter Baking" event, for inclusion in the Colomba roundup. If you visit her blog on April 21, you will see other versions of beautiful and elaborate Easter dove breads! [Update: to provide the link for the roundup!] 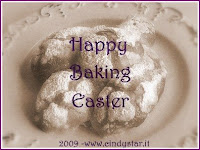 I'm also sending this bread over to Susan at Yeastspotting - check out all the amazing bread on that weekly roundup.
Posted by Nancy/n.o.e at 1:26 AM

Nancy,
nice to meet you and thanks for your entry!
Yor cakes are wonderful and the inside is shouting: Eat me!!!
I wish I had a little bit with my coffee now!
As you will see in my posts I did also have diverse shapes as trials.
You can also read 2 different toppings in "Colomba" and "Colombine" (Tiny Doves)posts, each easy to do with a fork.
Clever to shape a dove with sugar stencil.
Have a nice weekend!

I love the picture of the slices because it looks so moist and tender on the inside. Your descriptions are so good that I could almost imagine what it tasted like and it sounded so very delicious!

What a great idea to bake it in regular pans. I was thrown off by the specialty pans too - but it never occurred to me just to use what I had.
They look great, you did a wonderful job.

For someone who claimed to be afraid of yeast not so long ago, you have certainly mastered a lot of breads. the dove looks great.

What a gorgeous looking bread, I love the dove design!

I am in awe of your use of yeast. You have made wonderful breads lately! Love the dove on top.

I've never heard of Colomba bread. It sounds delicious. I love your attempts at creating the doves and that you were finally successful with the stencil. I wonder how you would free form a dove shape. It seems like it would be very difficult considering the oven rise.

I made a colomba one year - it was absolutely outstanding. Now I wish I had made one again!

Great job on this bread, Nancy. You are doing fantastic with your breads. You are an inspiration.

Nancy - these are totally beautiful loaves. I got way to wrapped up in looking for a dove pan and then saw Lien's slide show. Really I just should have used the pans like you did. I let myself get side tracked with the unimportant part of it.
Lovely.

Ciao Nancy ! I'm so glad you liked the colomba !! I love the sugarles colomba !

I love all the citrus in here. I bet it smells wonderful! I am putting this in my Easter file for next year-it looks lovely!

Oh, that looks good - inside and out! So pretty! I saw a buckwheat bread on a bread baking blog with a pear stenciled on top, and wanted to bake it so badly...but I haven't yet. I only got as far as downloading the stencil! I would love to try this...sounds delicious.

Wow, another fabulous yeast bread from you! My Italian grandmother made "Easter bread" every year, but it was nothing like this one. This bread looks irresistible. I can't even imagine what your kitchen must have smelled like when it was baking. And I love your doves (even the really subtle ones!)

Awesome job! It is the taste that counts. Glad you joined in, it feels good to know that so many people are baking this Italian bread not because they have any connection with Italy, but just for fun.

Great idea with using the stencil.
I'll have to try out SAF Gold. Sometimes my rich and sweet dough barely rises.

The whole blogging community has made me super jealous with all of their beautiful colombas! Yours turned out just perfectly, and I love seeing the pictures of your dough rising!

I love the dove at the end--very nicely done. I really need to track down some SAF Gold one of these days. I don't make a lot of sweet, rich breads at the moment, but there are definitely some I'd like to try.

Your bread does look lovely and yes, we really liked it too. Very tasty but perhaps not good for the waistline, though.:)

I liked your stencilled finish.

This bread looks incredible and moist!

Beautiful, and brilliant to use a stencil for the dove!

Wow, this sounds fantastic. I bet it smelled wonderful when it came out of the oven. Great looking bread - I'll certainly put this into my rotation.

What an awesome looking bread- I never got around to making any easter breads this year- would have been hilarious if you went ahead and used your silicon pig pan.

I'll have to try those candied citrus peels.