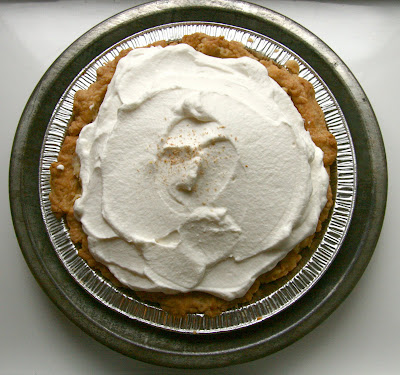 my little pie, inside a vintage 9" pie pan

Or: The Pie Only a Grandma Could Love!

When I floated the idea of Banana Cream Pie to my book group and family members, I got a lot of reactions along the lines of "eew." Personally, I like cream pies and banana ones are fine in my book. I mean they have sugar and cream, right? Although I'm not super-wild about the pieces of banana in the custard (don't like them in banana/nilla wafer pudding either) I'll definitely eat a slice of banana cream pie if it's put in front of me.

But seeing as this assignment fell in Lent, I wouldn't be eating it, and with my family and my book group both voting "no," I was left with a dilemma of what to do with the pie. It's not the easiest thing to send to the office with my husband, either. Finally I decided to halve the recipe and give the pie away to my in-laws, who I was pretty sure would enjoy it.

- Back at Thanksgiving, I compared Dorie's crust to the Cook's Illustrated (vodka method) crust, and CI came out on top [you can find the taste test at the end of my Twofer Pie post] because of its ease of handling, and superior flakiness and crispness. But I had a partial batch of Dorie's pie crust in the freezer, and a 7" foil pie pan on the foil shelf in the basement (I keep an assortment for giving away food), so I was set to make a half recipe.

- Somewhere along the way I'd read that both egg whites and egg yolks can be frozen. Without bothering to see if there are any special requirements (it turns out there are), about a month ago I tossed a bunch of leftover egg yolks in the freezer.

- I found out the hard way that thawed yolks are very thick, so whisking was difficult. When I put it over heat the pastry cream never made it to the boiling point -it thickened very quickly. I was thinking that I'd added too much cornstarch (when I halved the recipe, I went by weight not volume.) But now that I've read the P&Q, I see that others had this exact same problem. Except that they had the good sense to thin the thick pastry cream with milk. duh.

- So the cream was very thick and borderline lumpy from the thick egg yolks and maybe too much cornstarch. It looked exactly like beige wallpaper paste.

- Dorie's crust doesn't hold an edge as well as one made with more shortening. Also, I used my new pie weight chain to blind bake the crust, and while the bottom stayed flat, the crust shrank a lot. Luckily it didn't matter with a cream pie.

This was one homely pie!

I saved two little teaspoons of filling, which I studded with pieces of banana and a dab of the whipped cream. I tasted one and gave one to my daughter A.L.E. Her reaction:
"I like it better than I expected"

The flavors went together very well. It's not particularly sweet, but quite creamy and silky, with a nice flavor from the brown sugar and spices.

My daughters brought the pie with them on a visit to their grandparents' house, where it made a huge hit. So the next time I have an urgent call for a banana cream pie, I know exactly which recipe I'll turn to! 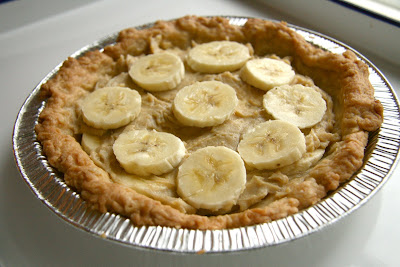 Amy of Sing for Your Supper chose this week's TWD recipe, which you can find on her post, or on pages 342 and 343 of Dorie Greenspan's wonderful book Baking From My Home to Yours.. Check out the TWD blogroll to see how everyone else's pie turned out.
Posted by Nancy/n.o.e at 12:19 AM

Well, I am glad I am not the only one with a shrinking pie crust!
Looks great, glad the inlaws enjoyed it.

It's supposed to look homey. :) It's a great-looking pie Nancy! And I agree - the flavors work... at first I thought something was wrong since the filling was brown... but I love the brown sugar in it. AND I love the vintage pie tin. Just perfect!

I made 2 mini pies and one of my crusts was fine and one just shrank up to almost nothing. I don't even slightly understand this. It does like like a very homey, comforting pie though and I'm so glad that it was a hit with your in-laws.

Good to hear you liked the pie better than you expected, unfortunately for me it was the other way around.... :(

It might be lumpy and bumpy, but I have a feeling your banana cream pie tasted great!

Glad that you ended up liking it in the end! I thought this was a fantastic recipe! I'm going to have to try out the CI pie crust, too!

first of all, it's not homely--it looks fine to me!
And taste wins over looks anyway!

Thanks for the info on freezing yolks/whites!

I thought your pie looked lovely! I was surprised as well at how much I liked the banana/cinnamon combo. The CI crust is my go-to as well. Yum!

Glad you enjoyed it in the end! Looks good to me!

It seems like pie crust shrinkage was a common problem with this. I am completely mystified. I am so glad that this was a hit with your in-laws, and that you and your daughter liked it better than expected. I agree that this will likely become my go-to banana cream pie recipe, to the extent that I need one. Yours looks great!

Love the little pie, glad the in-laws enjoyed it! I need to try that CI recipe!

It looks very lovely! I found it very sweet...I guess I am overly sensitive to sweet because the guys found it just fine...they are always so appreciative of anything I bake that I am becoming a little suspicious if I am doing a good job or not. I need you to live closer to give me a REAL opinion! Personally, I am happy Lent is about over, but it has been a blessed experience. I really like that little pie tin of yours...if I didn't have the guys here to inhale everything, I would definitely be going that route more often. Have a wonderful Easter, Nancy! Matt is serving all week for various things, and tonight he gets to go up for the blessing of the oils and a dinner with our Bishop...very cool.

It looks delicious to me and really taste is the important thing and this one was delicious!
Funny that so many people have bad feelings towards pieces of banana in pie and pudding.

My pie was homely but it did taste great. I made a nilla wafer crust, but I have been wanting to try the CI crust.

Glad that the in-laws loved this and you liked it better than you expected! :)

Oh my. I'll have to look into freezing yolks. Always wanted to do that. Good baking there, lady.

Ciao ! I love your pie look ! I'm sure it was great tasting too ! I really didn't think it was going to be so nice either !

My crust shrank too! I keep meaning to try that CI crust... Your pie still looks yummy though and I'm glad your inlaws enjoyed it!

I love the look of your pie and i'm so glad it was well liked :)
I had reservations too but this is a very good recipe, the crust was delicious ;)

It seems like we all had problems with super thick custard.

And I avoided the shrinking crust problem by using a graham cracker crust.

Vodka in pie crust is a great technique, thank you CI for that one. Glad you ended up with a well received pie after the pastry cream issues.

yeah...a homely pie, but the taste makes it worth it.

Amy of Sing For Your Supper said...

Well, I think your lumpy bumpy BCP looks delish! Glad your inlaws enjoyed it! Thanks for baking with me this week!

Some desserts are meant to be eaten with eyes closed--no shame there! I halved the cornstarch because of so many comments about how thick it became. I also always reserve some milk that I don't heat up, and instead whisk the reserved milk into the egg yolks, which makes it much thinner and easier to whisk. Just a thought!

I'm glad they liked it! The poor little ugly pie that no one wanted!

Dear Nancy, first of all auguri to J.D.E.I forgot before. Then I read you were interested in the colombas here is a nice method for making a mold http://www.cookaround.com/yabbse1/showthread.php?t=17154
I thank you very much for caring shortly we had another 'shake' let's hope well !

It looks good to me. All of my pies are homey pies.

Your pie looks great; didn't care for this one though. Now if it had been coconut cream, maybe. I have been meaning to try that CI pastry, you have pushed me to it, thanks.

Mine was pretty homely, too. I had been saving scraps of previous Dorie crusts, so I used the blob as my crust. It was kind of small, and flat, so I piled everything on top. Needless to say, not one of my masterpieces.

You got to use your new pie weight. . what could be more special than that? I didn't make this one, opted out. I'm not big on cream pies of any kind, especially banana. But everyone seems to have liked this one! Happy Easter to you.

I'm glad it ended up tasting good. I need to try the vodka pie crust. That's interesting about frozen yolks. I never would have guessed.

Aww, homely pies need love, too! I bet it was delicious!

I'm glad you found someone to enjoy your pie! I freeze egg whites all the time, but I've been afraid to freeze yolks. And it sounds like it's just as well that I skipped the crust--it sounds like it was rather uncooperative for many people. I do want to try the vodka pie crust at some point.

Sorry you didn't love the pie! Those darn shrinky dink crusts. Mine did the same thing! Sigh.
Glad you found a good resting place for the pie.
Chocolate, chocolate here we come.
Having a giveaway on my blog!

Hahaha, I love it: stick it on the in-laws! Glad everyone enjoyed the pie!

My minis shrank too. Homey pies are still delicious. I liked this way more than I expected.

I'm glad your pie found a good home; it looks yummy. I agree that the CI pie dough is great. I do want to try Dorie's eventually, though.

Pie looks great, Nancy. I thought it was going to look funny being brown and all, but it actually turned out quite well. Lent is almost over - hope you get to enjoy the next TWD!!!

I had a bumpy ride with this pie also, although it turned out okay in the end. I'd like a little sweeter custard next time. Your pie looks great! I'm glad your in-laws liked it. :)