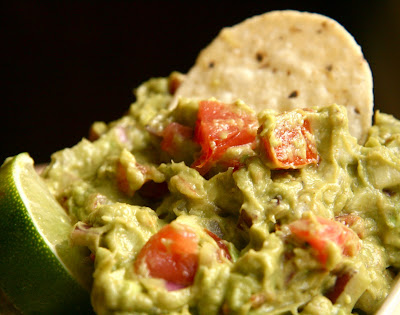 One thing that I prepare often is guacamole. At this point I don't really use a recipe, although I've tried to write down how I make it (which you can find on this post). While I wouldn't say my guac has risen to the level of a "signature dish", it always makes a big hit when I serve it at a gathering. In fact our book group has been known to gather around the guac and chips like sharks coming in for a kill!

Not too long ago Tyler Florence's chicken enchiladas were on the menu (which I posted last time I made them) so I figured I'd make Tyler's guacamole for a change.

The recipe is simple - chop and stir a few things together. I shaded a little to the extra side for all of the add-ins, and skipped the cilantro. My husband has those tastebuds that equate cilantro with soapsuds. I like the taste, and usually sneak some into the recipe, but we had none in the house. Jim was happy that way!

My recipe doesn't have any spices beyond salt and hot peppers, but Tyler's has cumin and chili powder. Even so, his was very mild so I added a pinch of red pepper flakes. If I had any fresh hot chiles I would have added them also. 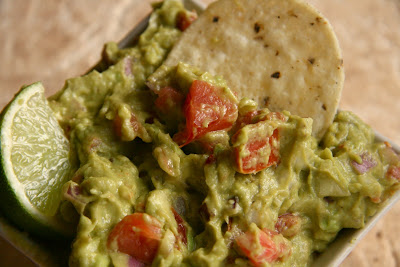 This was good guac. Very good actually. The seasonings were subtle, but they do give it a warm flavor. Will Tyler's guac replace my usual recipe? I don't think so. Mine tastes brighter and little fresher, with the goodness of the avocado in a starring role. Plus I can make it in my sleep!

I'm sending this over to Tyler Florence Fridays, a weekly roundup of blog posts featuring Tyler's recipes. Check it out and see what's cooking!
Posted by Nancy/n.o.e at 10:47 AM

Tyler's guac looks good, but you standard recipe is much closer to the one I usually make, so I will probably stick with that one. Why open my spice cabinet and subject it to toddler invasion if I don't have to? I love the, as you perfectly put it, "bright and fresh" flavors of a classic avocado/lime/tomato/onion/salt/etc guacamole. The main problem I have with guacamole is that I find that avocados go from "not ripe" to "overripe" in a flash - it is sometimes hard to find avocados of optimal ripeness.

I love, love guacamole. My favorite guac recipe is Mark Bittman's crunchy guacamole with corn and pepitas. But most of the time I just mush up an avocado and add some seasonings.

I love quacamole and always eat more than I should with tortilla chips...yours looks great.

I love a good guac! Especially with BBQ season arriving. Yum.
I like the cumin in it, it is one of my fave spices.

This looks really good. I have recently acquired a liking for guac only in the past couple of years. I should try this one!

You can make guacamole in your sleep? Now that's talent!

I wish I could make good guacamole - mine usually comes out too watery.

Guacamole is one of my favorite things ever. I like to try new recipes but I always go back to my own which sounds similar to yours. The avocado is the star. ;-)

This looks really good. I've never tried it with the spices he uses. It sounds wonderful. I love guacamole!

I should have checked to see if Tyler had a Guacamole recipe before I made my tacos this week...darn it.

I've never in my life my guacamole before.

I agree with you...I'd try this for the heck of it, but I like a clean, bright tasting guac too...with cilantro and lime juice! I can imagine adding a speck of cumin...freshly ground toasted cumin that is! Thanks for sharing your take on this dish!

I love guacamole! I haven't tried Tyler's recipe. I have my own too, all in my head!

I love homemade guac. I bought two avocados from my local market today!! Can't wait to turn them into this yummy treat. I seriously think I could sit down with a bowl of guac and just spoon it. Soooo delicious. Yours looks fabulous!!

I like guacamole the simpler the better. I love the photo, it looks all mysterious. Mysterious guacamole.

I love guac, and I loved Tyler's, so maybe I need to come to a book club night and try yours? :-)

I love guac in all its shapes and forms and love to compare recipes. I will definitely be trying both yours and his out. It's too bad about your husband's tastebuds..I don't thin I could live without cilantro!

It's still breakfast/brunch time and I REALLY WANT THIS NOW! Looks so great...surely this would be a breakfast food, don't you think?