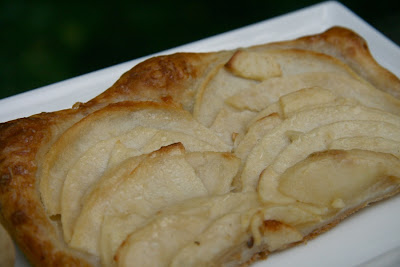 This hostess for the Tuesdays With Dorie baking group is Leslie of Lethally Delicious. Leslie and I began baking with the group two summers ago, just a couple of weeks apart. I think all of us TWD bakers joined the group for the experience of baking from Dorie Greenspan's exceptional book. What we found, however, was a group of supportive, like-minded people, each baking in his or her own kitchen in locations all over the world. Leslie and I became baking buddies, and over the course of many months we have gotten to know each other's strengths and weaknesses, likes and dislikes. We both travel a fair amount; London is my destination of choice, Paris is hers.

When I saw Leslie's pick for this week, I was amazed at how perfect it was: quintessentially French (of course), elegant in appearance and taste, but so, so easy to prepare that it wouldn't present a burden on us. Quite considerate of Leslie, wouldn't you say? So typical of her generous spirit!

Despite the simplicity of this recipe, and the puff pastry at the ready in my freezer, I had a very busy week and a surprisingly difficult time fitting this recipe into my time. Luckily for me, my older daughter, ALE , was visiting home and offered to bake the tarte. I jumped at the opportunity. 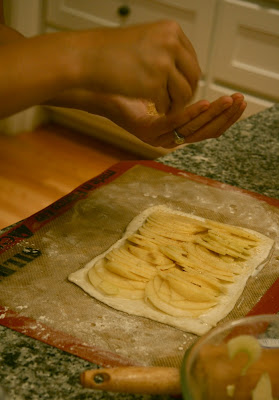 - You can find the recipe, along with some very helpful tips, on Leslie's blog post:

- The base of this tart is purchased puff pastry (or homemade for those accomplished/ambitious bakers). We used Dufour, an all butter puff pastry that Dorie recommends.

- My daughter baked the tart (1/2 recipe) after dinner last night; it made for a perfect midnight snack for us and a wonderful breakfast for my husband this morning. We baked a second one this evening to enjoy while writing this post.

- The first tart used apples from the farm box; nice and tart, just the way I like them. ALE sliced them with a mandoline, producing lovely thin slices. She skipped the jam glaze, because as much as we love jam, it's not a favorite on pastries. On the top ALE sprinkled some Sugar in the Raw before baking.

- The second tart used Pink Lady apples, which my daughter left unpeeled. This time she sliced the apples by hand, demonstrating that her knife skills are better than the mandoline! We tossed the apples with grated fresh ginger along with some lemon juice. After brushing the apples with an egg-white wash (egg whites are threatening to take over my fridge) we sprinkled them with some dark muscovado sugar. 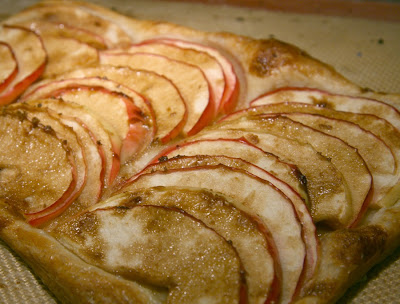 The Tarte Fine is might fine (sorry, couldn't resist!) No, seriously, this is a wonderful recipe to have in the deceptively-simple-but-still-elegant archive. We liked both versions of the tarte. I will not hesitate to serve this one to dinner guests (as well as family, time and again). Thanks, Leslie, for a fabulous pick.
Posted by Nancy/n.o.e at 11:57 PM 15 comments: 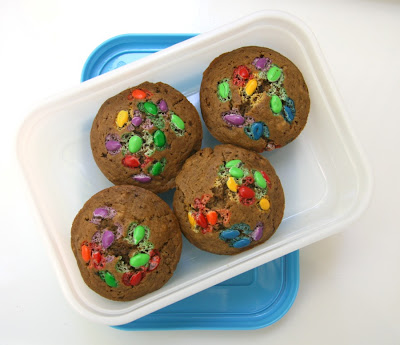 This week's assignment for the Tuesdays With Dorie baking group might be the most unusually-flavored muffin I've ever baked. Dorie calls these Coffee-Break Muffins, not just because they are a wonderful little treat to enjoy as part of a mid-morning breather, but because coffee - and lots of it - is baked right into the muffins.

- The muffins were chosen by Rhiani of the blog Chocoholic Anonymous.

- Sometimes I find all-butter baked goods to be a little dry, especially after the first day. For this recipe I used half butter/half oil for the fat component to make sure the muffins were good and moist.

- For a true shot of coffee flavor, the muffin recipe calls for both brewed coffee and espresso powder. I brewed up some decaf coffee but the espresso powder was the full-caff version.

- I was a little concerned that the muffins would taste overwhelmingly of coffee. I didn't want to add anything into the muffin batter because I wanted to evaluate the recipe (pretty much) as written. So I sprinkled the top with chocolate covered sunflower seeds, figuring that I could eat them with the muffins for texture and flavor, or I could eat the muffins without the topping. Unfortunately the seeds cracked in the oven's heat, and colored coating bled onto the muffins. Furthermore, by the next day the seeds had lost their crunch. I think that cocoa nibs, either plain or dark-chocolate-covered might be a better choice for the muffins. 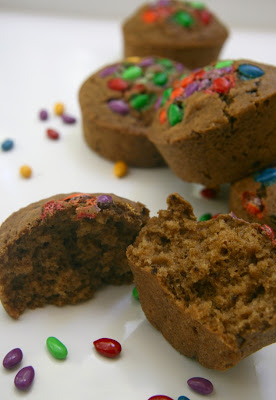 I loved the crumb on these muffins, it was dense but tender and moist. Surprisingly, the coffee taste turned out to be fairly subtle. The muffins were even better the second day when the flavors mellowed out and the crumb softened. The seeds were a nice crunchy addition on top of the muffins the first day, but really, the muffins were lovely without any topping at all.
Posted by Nancy/n.o.e at 10:29 PM 14 comments: 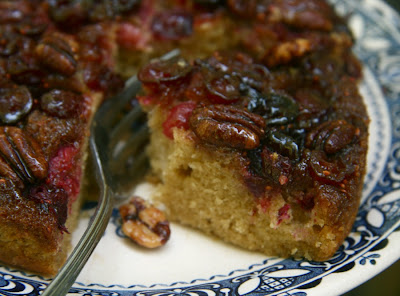 This week the Tuesdays With Dorie baking group got a jump-start on cool-weather baking with the Cranberry Upside Downer, a fairly simple butter cake festively topped with bright red cranberries and chopped nuts (or alternatively with cut peaches). As pictured in Dorie Greenspan's wonderful book Baking From My Home to Yours the cake looks like the perfect addition to a holiday menu, so I was thrilled to get to preview this recipe now, at the very beginning of the Fall (even if the temperatures around here are still decidedly summer-ish).

- Sabrina of the blog Superfluous chose the recipe this week. If you'd like to bake this cake, you can find the recipe on her post.

- There was no special occasion on my calendar for me to serve this cake, so I baked just half a recipe in a 6" cake pan and we enjoyed it as a weeknight dessert.

- I replaced the white sugar with blond palm sugar. It has a wonderful caramel-y flavor and a lower glycemic load than regular sugar.

- Rather than cinnamon, I added freshly ground nutmeg and allspice to my dry ingredients. I chose the almond extract option rather than vanilla. 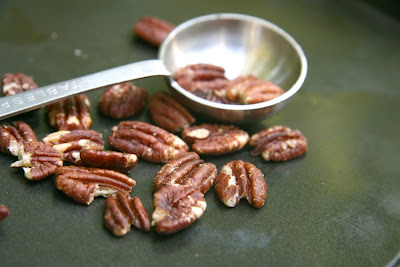 - My nut drawer had a bag of very tiny pecans, which is what I used in the topping. I lightly toasted them in the oven before placing the in the baking pan with the cranberries.

- The local Fresh Market carries a line of frozen berries all year long, including cranberries, so that's what I used. I cut them in half while they were still frozen because I love the "wagon wheel" effect from the cut berries. 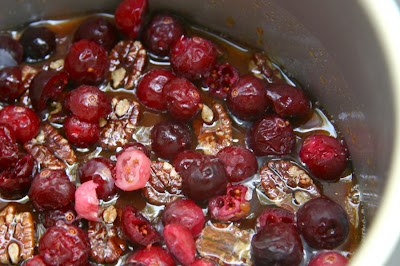 - I wanted plenty of topping, so I used a heaping measure of pecans and cranberries but it still made rather a thin layer of topping. The next time I'd probably double the amount of topping.

- I was excited to use my new little 1-cup copper saucier twice - first for cooking the melted butter and sugar and the next time for warming the jelly that glazes the cake at the end. I used a mixture of black cherry and apple jelly because I still don't have the versatile and useful red currant jelly. 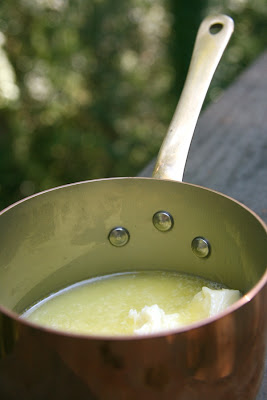 We enjoyed the cake for dinner on Monday and breakfast this morning! As far as cakes-with-fruit go, this one doesn't unseat the Dimply Plum Cake (which I posted here and followed up here), but it was a great weekday sweet to have on hand. It would also be a good addition to the holiday table, served with some vanilla ice cream.

The crumb was surprisingly soft and quite moist and provided a lovely sweet base for the topping's tart/sweet/crunchy combination of flavors. As an alternative to cranberries, in addition to the peaches that Dorie mentions this cake could be paired with any number of different fresh fruits (the tarter the better). 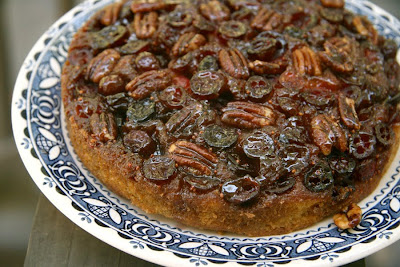 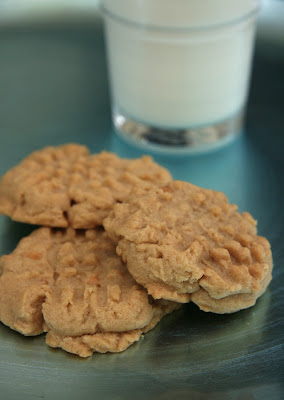 Hundreds of years ago the Aztec civilization enjoyed a pasty substance made from mashed and ground peanuts. While they were definitely onto something, the Aztecs never got to experience one of peanut butter's crowning glories: the Peanut Butter Criss Cross Cookie, which just so happens to be this week's assigned recipe for the Tuesdays With Dorie baking group. The cookies feature the traditional distinctive cross-hatch pattern made by pressing the tines of a fork into the dough before baking the cookies.

- I could tell from reading Dorie's recipe that her cookies would be different from what I'm used to baking. (you can find the recipe - in both French and English - by clicking over to this post by this week's TWD hostess Jasmine of Jasmine Cuisine) In Dorie's recipe, there's actually more butter in the dough than peanut butter.

- I made half recipe, which gave a yield of 27 cookies

- Aside from omitting the nuts, I followed recipe exactly with one very small exception: I used dark brown sugar rather than light because that's what I had on hand.

- After forming balls of dough I chilled them for about half an hour before pressing the criss cross pattern with fork. This helped the pattern stay sharp and also helped keep the soft dough from spreading as the cookies baked in the oven.