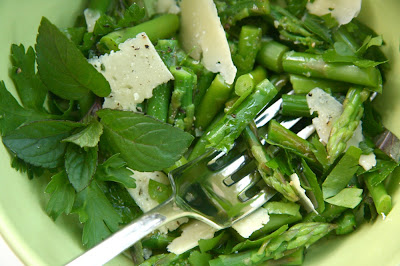 Every month Megan of My Baking Adventures chooses a "challenge" recipe for the intrepid cooks in the Tyler Florence Fridays group. Luckily this challenge is optional, or I'd have been kicked off the island long ago, seeing as I have yet to attempt any of the challenge dishes. They always sound so good, but I've not been organized enough to easily work specified recipes into my cooking "plans." The baking assignments (from TWD and now SMS) have been more than enough structure for me!

When I saw that the TFF April challenge recipes would be Tyler's Deep Dish Ham Quiche (and Asparagus Salad, too) the prospects didn't seem good. My husband has an almost knee-jerk tendency to reject pork products - especially ham - and is deeply suspicious of the fat and cholesterol in eggs. ("What about the bacon?" you ask. He does indeed eat food cooked with lardons of bacon, but there a little bit of bacon delivers a huge flavor impact so he's willing to make an exception. Well that, and the Benton's bacon we use is pretty amazing...) A ham quiche, especially a deep dish one calling for 12 eggs (not to mention a quart of cream!) wasn't likely to meet with a warm reception at our dining room table. And as luck would have it April didn't present us with any entertaining opportunities where quiche would be appropriate.

But then my husband got called out of town for a 10 day business trip, which opened the window for all sorts of cooking of food that normally wouldn't "fly", including the challenge recipe! You see, I love quiche, and on previous occasions I've been known to make it when he was out of town.

Seeing as I've never one to follow the recipe exactly, I'd say my biggest challenge with the April Challenge is to see whether what I made can still be called the the TFF selection! All I can say is "Thanks for the salad," because the rest is a pretty long stretch from Tyler's original! 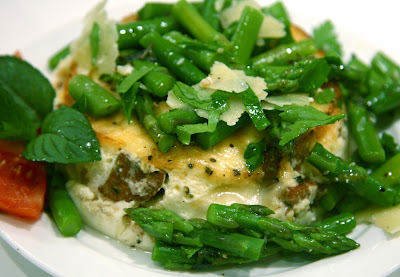 Let's start with the salad, because I made that first, and completed it while there was still some natural light for photos!

- Because it was such a small fraction of the original recipe, I didn't actually weigh or measure anything, but tried to estimate the proportions as best I could. In my opinion, this was pretty close to the way the recipe was written.

- I used a couple sprigs of flat leaf parsley and a sprig of chocolate mint from my herb garden - yay for Spring! I really really really don't like dill, so I left it out. I was trying to think of what herb I could substitute but I finally decided to just go with the parsley and mint.

- Instead of drizzling lemon juice and olive oil separately, I used a lemon olive oil.

- My parmesan was from Australia! The entire salad didn't take more than 5 minutes to make, and that's including blanching the asparagus!

Although I love LOVE quiche, I just wasn't up for making a Tyler's rich recipe. I knew that I could lighten it up and still get the kind of custard-y goodness that I'd enjoy. So that's what I did. The first step? Eliminate the crust.

- Second step = incorporate cubes of gruyere. Swiss-type cheese is essential for quiche, imo. So, my stir ins were:
1/2 Vidalia onion, sliced and carmelized
1.5 oz cubed gruyere
2 oz habenero chicken sausage (left over from previous pasta dish. I really wanted to use bacon or prosciutto but I didn't want the sausage to go to waste) 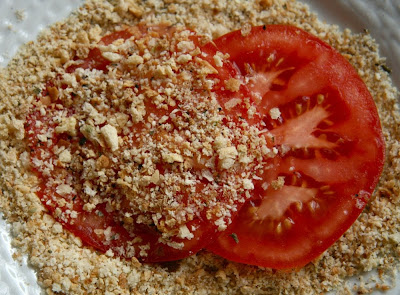 - I made my "quiche" into individual flans in 8-oz ramekins. I got the bright idea to seal the bottom of each ramekin with crumb-covered tomato slices:
3 thin tomato slices
2 T seasoned dried bread crumbs (I make these from leftover bread and keep them handy in the freezer)
1 T grated parmesan cheese

I placed the 3 ramekins into a larger baking pan lined with double layer of paper towels and filled halfway with hot water. 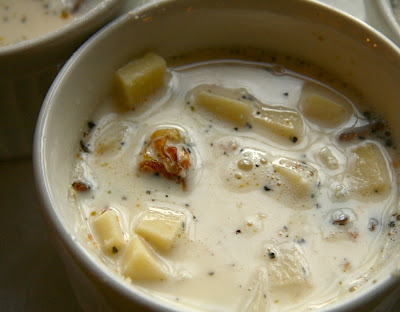 Then covered the whole thing loosely with foil and baked at 375 degrees for around 40 minutes.
At that point they were set and nicely golden on top. And the natural light was all gone... 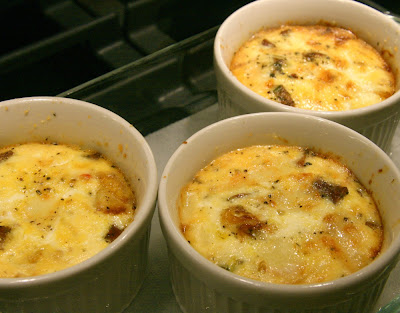 - The flans/quiches unmolded easily, but then kind of collapsed. It's hard to be deep without the dish, or the crust, I guess! I was surprised to see that the tomato ended up in the middle - the custard had seeped beneath and around the slices.

I loved this meal!

I liked the little flans with and without the salad on top. They had lots of flavor and I didn't miss the crust (no, really, it's true). The gruyere was delicious addition, and the caramelized onions gave a rustic sweet note. The sausage I used was a little assertive, so I'd use bacon or some kind of ham next time, or omit the meat altogether.

The salad was fantastic with and without the "quiche." I wouldn't hesitate to serve it on its own. Easy and delicious.

As an aside, I used to be a confirmed asparagus-hater, and I've only recently discovered (decided?) that I can not just tolerate, but actually like, asparagus. This is an about-face of epic proportions. I give the credit to J.D.E. (who asked me to buy some back in March), to Mark Bittman (who taught me how to cook it - I'll post that recipe eventually!) and to some particularly tender pencil-thin asparagus.

I'm excited to have such a fantastic way to enjoy asparagus! This was a great dish/two dishes.
Thanks, Tyler and thanks, Megan for choosing it as our challenge. 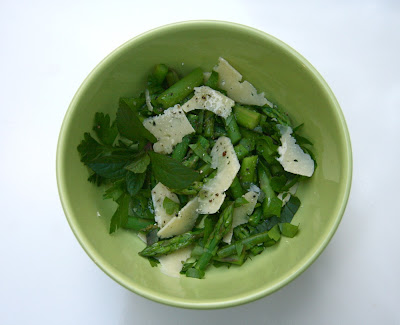 In a freaky coincidence, I just watched the NYTimes video of Mark Bittman makinhg crustless quiche, and his sank like a deflated tire. So it's all good! And speaking of good...love the individual servings, and the brilliant idea of the tomato and breadcrumbs at the bottom (middle?)

And speaking of asparagus conversions - I used to think it was evil (and I was a kid who liked vegetables!) but now I look forward to asparagus season. The funny thing is that I don't seem to like it with or under anything (vinaigrette, sauce, etc.) Just plain, steamed and pencil-thin. (Well, tossed with pasta, with olive oil and parmesan. And dipped into poached eggs - faux hollandaise! - but we won't go there in honor of the husband.)

However, he does love quiche and asparagus so sans the ham, this is right up his aliey.

Oh you're good - really! It takes talent to transform the original recipe into something much healthier and dare I say, cuter? Love the little ramekins - that's probably the way I'll make it!

So funny, when my hubs is out of town or getting home after dinner, I will often take the opportunity to cook something I know he would not be very excited about, like say something chock full of arugula and gruyere. These quiche/flans look just incredible. I can see why you wouldn't miss the crust with all of that other good stuff going on. The salad sounds fabulous - I agree that pencil thin asparagus makes all the difference!

I really like the idea of baking quiche (or flan) without crust; I mean, the best part is the filling. I love quiche, but rarely make it because it is so high in calories, so this is a great way to lighten it up.

I have resisted joining the Barefoot Bloggers for the same reason you hadn't made any of the challenges: baked goods are one thing, but it's hard to work assigned dinner recipes in.

Isn't it fun to discover vegetables that you love now, but used to hate? That is what happened to me this winter with all types of winter squash. It used to make me gag, but now I love it.
I really like what you did with this recipe. I prefer crustless quiche and the ingredients you used sound very tasty.
It looks beautiful.

That salad looks amazing and I love the lightening up you did to the quiche. It's definitely one of those things that can lose some of the heavier ingredients and still taste good!

I've been eating so much aspargus lately, I'm amazed I haven't turned green. The salad looks delicious and I think I'm going to try it, because I mostly just roast the asparagus in the oven and call it a day.

The quiche looks perfect too!

what a creative interpretation of Tyler's dish!

Yeah! I am glad you got creative! I ending up going with adpating Ellie Krieger's healthier quiche recipe and making Tyler's salad. Your mini quiche-flans look amazing--great job!

The sausage flans sound fantastic. And I totally agree with you on the choice of cheese for quiche.

oh, that mark bittman. he works wonders with most everything. his *how to cook everything vegetarian* is my go to cooking guide.

i can't wait for the first asparagus of the season--just a few weeks! then i'll be eating it every single day until i'm tired of it:)

Nice quiche, send some my way please! I don't dare join another food group, not enough time. As always a great post and pictures.

I can arrange to be in Atlanta the next time you make this. It looks absolutely wonderful to me. Gorgeous photos of it all. I love all your changes, too. Very clever you are over there in that kitchen of yours on a weekly basis.

So cute! You really did make this your own. Great job!

I think I'll try this Quiche recipe myself. Good going!