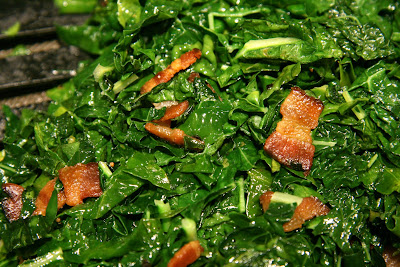 I found this recipe for greens in my big yellow Gourmet Cookbook. It is a Brazilian recipe, and is simple as can be (3 ingredients, including salt!) Gourmet says "this is a great way to work collards and other hearty greens into your weeknight culinary repertoire" and I agree!

Although the recipe's title is for collards, the intro says that in Brazil (where the recipe originated) it is used for kale. I had both kinds of greens in my fridge from a recent farm box order, so I used a mixture of kale and collards.

For this recipe, the greens are cut into very thin ribbons (Gourmet helpfully informs us that, "an old folktale says a woman isn't ready for marriage until she knows how to shred the greens just right.")

- I've found the easiest (and really fun) way to remove the center ribs from large leafy greens is to hold each leaf by the stem vertically in the air with one hand, and slice along each side of the stem with sweeping downward slashes of the knife.

- To get ribbons, the leaves are supposed to be rolled like a cigar and then sliced thinly crosswise. I've never actually rolled a cigar, so I just rolled as neatly as I could. The ribbons weren't that difficult to slice. But then again, I'm not trying to qualify as a Brazilian bride.

- I used a combination of Niman's Ranch bacon and Broadbent black pepper crusted bacon. These bacons are not as strong and smoky as Benton bacon, and I had them in the freezer.

This is a great easy recipe for greens. We really loved these, and as long as you don't mind a little bacon, this is a superb side dish. It's suited to the last minute (and doesn't take much more than that) but you could make it a bit earlier and let it rest in the pan, reheating it at serving time.

If you read all the comments about this recipe on Epicurious, you can see all kinds of things that people have added. I prepared this just as written in the cookbook (didn't even read the online version until I looked for the link for this post). I thought about adding garlic or red pepper flakes, but wanted to experience it just as it was. And it is an amazing recipe with just 3 ingredients: greens, bacon and salt!
Posted by Nancy/n.o.e at 12:20 AM

Ciao ! Apparently farmers boxes all around the world carry the same veggies !! But this recipe makes me wish it was friday already !!

As long as you don't mind the bacon, now there's a wack. . . bring on the bacon and these greens. That looks lovely.

Phew -- I sure am glad that I did not have to undergo a greens-shredding test (or any kitchen test, for that matter) before being deemed suitable for marriage. This looks like a really great side dish, presumably even if the greens are not shredded just right. You know that I am solidly in the "bacon makes everything better" camp.

Great recipe! I'm always looking for ways to include greens. I can't wait for my CSA to start back up again.

I did not know there was a right way to shred greens. :P

Being from the South, I can appreciate that greens and bacon were made for one another. What a great way to eat greens! These look yummy!!

oh yum...i love greens and, as my brother says, i'm a vegetarian who has been known to eat bacon. the smell alone is enough to make me swoon.

i hope you have power--i've been marveling at the photos of my old stomps in the southeast covered with snow.

I love, love, love, kale. My friend who just returned from a 3-month stay to Brazil can't stand it right now. She said they eat it raw.
This looks so perfect and I would enjoy it on any weeknight.

You can never go wrong when combining bacon and salad together. A definite favorite in my household. Mind you I am known to just cook bacon by itself and eat it like chips!

Going to try this instead, might be a little healthier for us :P

Love any post that includes "I've never actually rolled a cigar" as part of the paragraph :). LOoks great...