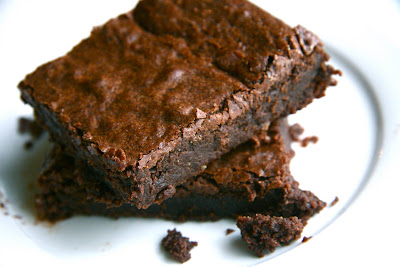 We've just passed the halfway mark of Lent (24 days down, 22 days to go) and it seems like the perfect time to share my very own pre-Lenten Fat Tuesday indulgence: I baked a whole pan of brownies for no reason other than I wanted to eat really good brownies before my 6.5 weeks without sweets of any kind.

I have to confess that when it comes to brownies, I'd always been a Duncan Hines girl. Or Ghiradelli mix from Costco, which has the double benefit of being yummy AND cheap! Once I began food blogging - and the attendant food site surfing - I started bookmarking brownie recipes, but I've never taken the opportunity to try them other than Dorie Greenspan's Quintuple Chocolate Brownies. Honestly, the Tuesdays With Dorie weekly assignments take up most of my sweets-baking time, energy, and calorie allotment, so I haven't made much of a dent in the ever growing mountain of brownie recipes. Luckily there are a few people who are making a project of baking through brownie recipes, so I can happily ride on their testing coattails!

When Fat Tuesday rolled around I decided that what I really really craved (yes, aside from the Chocolate Grand Marnier cake and the Caramel Crunch bars, and the four other TWD selections that I baked that week!) was a great brownie.

I'll spare you the ponderings and indecision of the recipe selection process (I printed off several recipes, sure that they would be The One that I'd bake). In the end I baked the "BAKED" brownie recipe. And boy was it delicious!!

- I used up a bunch of different odds and ends of dark chocolate (60-70% cocoa) in my baking drawer.

- Even though this was my Fat Tuesday indulgence I couldn't bring myself to put in 5 eggs. so I used 3 whole eggs and the equivalent of 1.5 eggs in egg substitute - that's all I had. I figured the scant measure on the eggs would make for a fudgier brownie.

- After adding the sugars, the mixture was really grainy.

- I typically have the worst time with doneness testing of brownies. This time I used the King Arthur "divot" method and it worked! My brownies were perfectly baked. 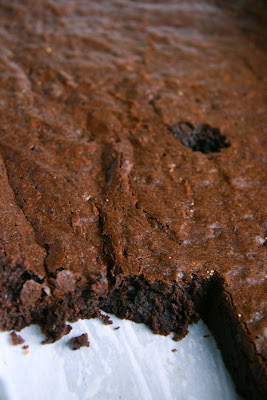 These are intensely chocolaty and very moist, but with that nice thin crackly crust on the top. I cut big generous servings - none of that brownie bite stuff this time!

And the taste? These were the best brownies I've ever eaten, much less made. This brownie recipe is a keeper! And luckily, so were most of the brownies. After demolishing a respectable percentage of the brownie pan's acreage, I packed the rest up in the freezer.

I pulled them out of the freezer to serve to book group, and I can tell you that the brownies caused quite the sensation. My chocolate-allergic husband was absent that evening, and H and I had given them up for Lent, but the other 5 members just dove in. Many brownies and a few crumbs later, the general consensus was that these brownies were chocolate heaven!
Posted by Nancy/n.o.e at 7:48 AM

What a great pre-Lent indulgence! I received the Baked book for Christmas and I haven't made the brownies yet because I've seen some blogs where the people didn't like them very much; however, your rave review has made me want to try them. I'm going to put them on the list to make after Easter.

Hi Nancy! Thanks for the shout-out, and I'm glad you've converted from a boxed-mix to homemade.

Although I didn't care for the Baked Brownie, they look absolutely delicious and I'm inspired to try them again.

They look decadent, rich and fudgy, just the way I like them! The perfect indulgence!

I made these this week too - they're incredible! I'll try the 3 egg version next time.

Wow, this looks like the perfect brownie! I've been using the recipe from Martha Stewart's Baking Handbook, will have to give this one a try.

Wow, the best brownies you've ever eaten?! Now, I have to try these brownies!! They look deliciously fudgy with a slight crumb. And I love that they look so chocolatey and fudgy without looking raw!! This is my ideal brownie. How could I have owned Dorie's book for so long and not have made these brownies?!

I just got the Baked book last month, and have been trying decide what recipe to make next (made the red velvet first)... after seeing your brownies, my mind is made up!

If they're anywhere near as good as they look, I think I'd faint! I have 'Baked' on reserve at the library...I'm leaving this minute to pick it up!

I couldn't think of a worse fate than to be allergic to chocolate. :)

Found your blog via your participation in presto pasta nights and I'm having a great time catching up on your blog.

And PS: Thanks for telling me about the "divot" test. You've solved a lifelong problem for me.

I can't even imagine the pressure of having to choose THE ONE perfect brownie on the eve of 6.5 weeks of sweets abstinence. It looks like you chose perfectly. I have also been a Duncan Hines/Betty Crocker brownie type up until recently (and I still like box brownies, to be honest with you) but the real thing is almost like a different food entirely, it is so much richer and more decadent. I can't wait to give these a try!

Sounds wonderful, Nancy. The best brownies I've every made are Zingerman's Magic Brownies--this awesome foodie spot in Ann Arbor allowed Midwest Living to print their recipe, and I was able to make them for myself. I usually go the cocoa brownie route because it's cheaper and I always have the ingredients on hand. Now I'll have another recipe to try--thanks for sharing!

This is one of the things that is so great about blogging. I've tried all sorts of brownie recipes and now you have found the perfect one...it looks just exactly like how I want a brownie to be! Thank YOU!

Those look delicious. I love brownies. I haven't tried this particular recipe yet. I did make the King Arthur ones, and they were pretty good. I think I don't like the dutch-processed cocoa in them, though.

BTW, baked off a couple more brownie recipes this weekend, and will hopefully get the posts up in the next couple of week. I hope you'll try them out as well (after Lent of course), and I hope to get your thoughts. :)

You must have read my mind because I was just thinking about making brownies but I get irritated because I had the same problem of figureing out when they are done!

They always end up half finished and I put them back in. Thanks for the tip from King Arthur...I think that will help!

Your recipe looks great too!!! I love that you cut back on the eggs too....

I have to try these again, maybe with less eggs. I think I also over mixed. Thanks for the divot tip - didn't know King Arthur had a blog - where have I been.