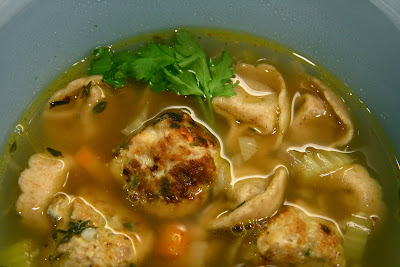 Meatballs? Yes please! I have never met a meatball that I haven't liked. Swedish meatballs from IKEA? I've bought them by the bagful. Meatballs made with grape jelly (those mainstays of Junior League cookbooks) served at cocktail parties? I'll be standing right there at the chafing dish. My mother's spaghetti and meatballs? This is what I'd likely consume at my 'last meal.'

I do have a problem with meatballs, though. They are a pain in the neck to make. I really dislike browning a big pile of meatballs on top of the stove. For spaghetti and meatballs, I try for the brown-on-6-side approach. They end up looking like oversized dice, rather than balls, but they still taste amazing. Because of the high "bother factor", I make meatballs rarely. (I should probably try baking my meatballs in the oven, but I really like the taste they get from browning in a skillet with olive oil)

Why all this meatball talk in a post about chicken noodle soup? Good question! Tyler Florence featured this soup on his Rainy Saturday episode of Tyler's Ultimate, and he presented it as the ultimate chicken noodle soup. Now I'll bet there are lots of grannies out there who would wag their fingers about this soup passing for chicken noodle. It has a chicken broth for a base, but the "chicken" is chicken meatballs and the "noodle" is tortellini. Really, this is an Italian Wedding soup without the spinach.

No matter what it's called, when I watched the episode with this soup, I decided to brave the meatball experience to try the recipe.

I cooked this soup the same week that I watched this episode, and even took notes, but when the time came to prepare the recipe I couldn't find my notes and didn't remember some of the steps and tips. Here are the things I learned from making this recipe (a lot of meatball-making tips!):

- The most important thing is to be sure to use fresh - raw - sausage. The comments section of the online recipe is filled with tales of meatball woes, and many of the people used the fully cooked sausages, which do not work with this recipe. If you want to use those cooked sausages, just slice them and add them to the soup (you will save the meatball-making hassle, but the flavor will suffer a bit, imo).

- I couldn't find raw chicken apple sausage (the flavor Tyler used), so I purchased chicken Italian sausage - which was fine b/c of the tortellini and parmesan gave it a slight Italian flavor. (Shredded basil could be added to the soup at the end to further empasize the Italian aspect.) I found the sausage at Whole Foods, used 5 links, .8 lb total, and removed the casings.

- I don't think it would be very difficult to start with ground chicken and add some spices to make homemade bulk sausage.

- There's a mysterious lack of direction in the recipe. You use half the garlic for the broth part and then it doesn't say what you do with the other half. I put it in with the meat.

- I thought the food processor was unnecessary for the meatballs - and I just hate washing it when I don't need to use it! In fact, as the recipe is written, the mixture ends up overprocessed by the time the parsley is chopped. The next time I would either: 1. chop the parsley and mix the meatballs by hand instead of in the fp. Or 2. put the onions and parsley in, process, then add the other ingredients just to incorporate.

- Because the meatball mixture was kind of wet I added some panko crumbs. Crumbled bread would work also.

- I took Tyler's tip to use a 1 tsp disher to form the meatballs. (When I make my bigger meatballs for spaghetti, I roll them between my palms. This mixture was a lot wetter than meatballs I usually make.)

- These meatballs were so small that I couldn't give them the six-sided dice browning treatment. Instead, it was more like browning on 5 or even 4 sides. They went into the frying pan as adorable little balls and came out with funny angles and flat places.

- I used a 9 oz pkg of Whole Wheat Tortellini from Monterey Pasta Company, in Classic Italian Cheese flavor. This is my favorite brand of the pre-made pastas - it comes in a refrigerator case but I when I buy it I always throw it right in my freezer until I'm ready to use it. I always have a couple of packages of these in the freezer for those "desperation dinners!"

- Half the broth was my homemade turkey stock. Because my stock was so strong, I didn't want to use it for all the soup's liquid. I filled in with purchased chicken broth.

- I added "hot salt" (a salt blended with hot red peppers) to the broth and the meat mixture. I also added ground black pepper, which is not in the recipe.

- Tyler served this soup with grilled cheese sandwiches and brownies for lunch. Whoa, that's a lot of food for lunch! We enjoyed the soup with a salad and bread for dinner. 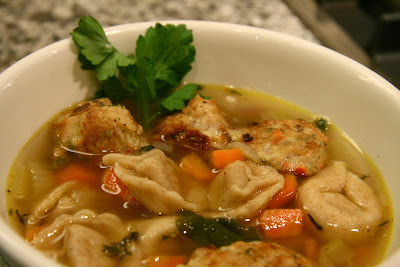 This was tasty soup! Making and browning the meatballs was a bit of a bother, but luckily we got enough servings out of the soup to make more than two dinners for the two of us. To be honest, a good part of the great flavor was from the homemade turkey stock I used.

My biggest beef with this "ultimate" chicken noodle soup is that your really can't call it that. It isn't chicken noodle - not from the perspective of the chicken or the noodles. It is, however, a really good soup that features meatballs and tortellini - and "ultimately" that's a good thing.

I'm submitting this to to Tyler Florence Fridays, a group devoted to exploring Tyler's recipes on a weekly basis. Stop by and see what the Tyleristas are cooking up!

Well, your soup looks totally worth the hassle of browning the meatballs. Whether we can call it a chicken noodle or not, it looks DIVINE. Comforting, warm, and hearty, I can't imagine a version of chicken soup that I'd like better. I'll take meatballs anyday over shredded chicken in my soup!

Our favorite sausage has been the Whole Foods Hot Italian Chicken(or Turkey) for forever now. This reminds me of a wonderful recipe with tortellini that we loved, have to see if I can find it, if not this will be beautiful.
You won't approve but I fear I'll let my meatballs cook in the soup, I know shame on me.

Nancy, that soup looks so yummy. I hate (!!) the tedium that accompanies making meatballs so I never do it. Maybe the next time I have a cold and rainy day with some time on my hands I'll give it a go and then this soup is going to be at the top of my list of things to make. I just ordered a copy of Tyler's book from Amazon because I love all of your TF posts so much. Oh, do you ever make a big batch of meatballs and then freeze some of them? I'm wondering if they'll stay nice and crispy if I did that.
By the way, my dad is such a fan of those meatballs in grape jelly concoction. I can't wrap my head around it.

Now you have me craving meatballs!

Oh,I was hoping you'd make this after you hinted about it! It looks wonderful. I like the idea of the tortellini (and it's good to know that brand is good - I need some frozen desperation dinners!) And, finally, as for those grape jelly and chili sauce )or ketchup) meatballs, like Jessica's dad, and like you (I think?), I really like them. There, I said it in print.

This looks GREAT, although I'm with you; I'm not really seeing the chicken noodle aspect of this soup. We'd still make it even if you called it meatball tortellini soup, Tyler! I also love meatballs but hate making them. These definitely sound well worth the trouble, though. In fact, I'd be tempted to double at least the meatball portion of the recipe and freeze some of them cooked. I wish I had a batch of this soup ready for this snowy day!

It looks like a delicious soup even if not chicken noodley! ;-) My new thing with meatballs is doing them in the oven so I don't have to bother with the browning and mess. Not quite the same but so much easier I don't mind.

I don't worry about the tedium of making meatballs - David makes them for us!

Seriously though, what an interesting combination of flavors - and I'm glad it worked together.

This looks unbelievably comforting, and so very delicious. The dunplings MMMM.

That soup does look really soothing and comforting. I never think to put meatball or sausage in soup. Looks yummy!

This looks absolutely wonderful. We love Wedding Soup so this is now on my TODO list!

It looks like your hard work with the meatballs paid off. Very hardy! Something that would truly warm you up and be really comforting.

this sounds so delicious, i have this one marked to try out. i'm not a big fan of making meatballs either but i will suck it up for tyler. :P

This has been on my to try list for awhile, I really should do it soon.
Suggestion for browning meatballs in the oven with some extra flavor - preheat your baking pan until it is really hot, put a bit of the oil on it, then add it back into the hot oven for a min/two to get "smokin" then add the meatballs and roll them around. You'll get some of your browned crust and not have to stand at the stove. :-)

Can't wait to try this soup!