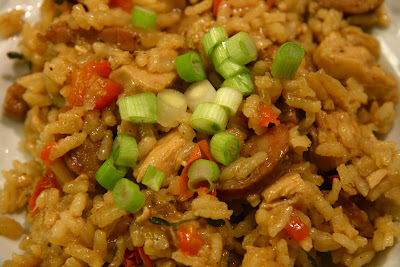 One of my current resolutions is to cook from the freezer and pantry. I've managed to accumulate all sorts of great food, so this shouldn't be such a painful task. Another goal of mine is to concentrate on recipes from my ever-growing cookbook collection. It's so easy to dial up a wonderful recipe on the internet that it's become somewhat of a crutch for me.

I had some Aidell's chicken andouille sausage in the freezer, and decided to look for a Cajun-inspired dish. Mark Bittman's How to Cook Everything has a Jambalaya recipe, and one of the variations is Chicken and Sausage Jambalaya, also called "brown jambalaya." Sold!

Bittman's basic shrimp jambalaya recipe (red jambalaya) is found here. To make a brown jambalaya with chicken (turkey in my case) and sausage, you omit the ham, tomatoes, and shrimp, and add chicken and sausage and also increase the amount of stock. I made a few further changes to fit my ingredients, which also made the dish quicker to prepare:

- The recipe contemplates using uncooked sausage and chicken. My andouille was fully cooked and I also had cooked turkey pieces in the freezer.

- As written, the recipe serves 8. I decided to cut it in half. I used 6 oz. of the sausage (1/2 pack), which I cut into slices. The heaping cup of turkey scraps were bite-sized.

- I first cooked 1 cup each of onions and red bell peppers in olive oil with salt and pepper. My burner's medium-high was hotter than Mark Bittman's, though, because my veggies nearly burned in under 10 minutes of cooking.

- Next, I stirred in the 1 cup of rice, 1 T. garlic, 1/2 tsp cayenne, 1 tsp thyme, sausage and turkey over medium high heat for just a minute or two. Note that the linked recipe calls for par-boiled rice, but the book does not. I used uncooked white rice - medium grain. According to the book, you could use the same quantity of cooked brown rice, and I will try that some time.

- Then I poured in 3 c of chicken stock. At this point, the pot is supposed to simmer uncovered on medium for around 30 minutes. Although I turned my burner a bit lower than medium, it still cooked pretty fast. The stock was mostly absorbed in around 15 mintues. I covered it and let it rest for about 15 minutes. I took that opportunity to make up a big salad. 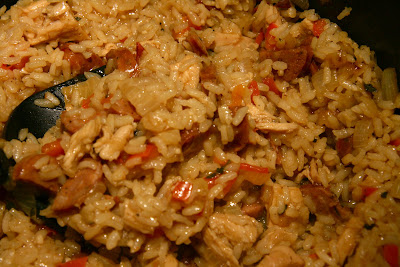 We loved this quick, easy and tasty dish. It made a perfect weeknight dinner. Sticking to the recipe and using uncooked andouille and chicken would be even better, as the sausage would flavor the vegetables and the chicken would absorb the flavors as it cooked. I think chicken thighs would be perfect in this recipe.

I used the recommended amount of cayenne pepper, and for us the jambalaya had a nice kick, but it wasn't too spicy as to be distracting. If you are sensitive to spicy food, however, I'd say to reduce the cayenne.

I would serve this to company in a heartbeat; the best part is that it could be made ahead.

My bayou-born husband gave this recipe his stamp of approval!
Posted by Nancy/n.o.e at 7:00 AM

I bet your husband liket it it sounds fantastic !! I do the same use more and more internet instead of my beloved cookbooks (that I usually read before sleeping though)!

I just stuck to my own freezer/cookbook/quick weeknight meal resolutions and made something AWFUL! This looks much much better, so I'm bookmarking it. Right now!

Mmm, I love jambalaya! This version sounds particularly good. My goal was to cook more from my pantry/freezer, as well, and to plan ahead so that if I know I'd be busy during the week, I could freeze an already cooked meal and reheat during the week. So far, I haven't done great with this resolution. However, I actually have all of the necessary ingredients on hand to make this jambalaya, so I have no excuse!! I can't wait to make this!

I am guilty as well of using the internet instead of my cookbooks as my go-to for recipes. It's about time I start using the recipes I actually spent money on, though! The jambalaya looks great. I love Mark Bittman's recipes.

You always cook such good food for your family. I've never tried so many things that you've made and I have to say that seeing your pictures makes me curious. I'm not a picky eater or anything, but we've just been so used to cooking the same things because it's easier..haha.

I'm trying to cook from my freezer and pantry too. This looks great!

This looks really delicious, I love that it can be made in advance.

I love jambalaya, looks delicious!
We have been concentrating on pantry items and the vast array of cookbooks too. No bean left behind!

Oh, the internet is SO easy to go to for a recipe, isn't it? I need to start using things from the freezer too before next hunting season arrives. I'm going to try substituting venison for pork, beef, etc., so I can get some of this used up!

This looks delicious! We love jambalaya, and I don't cook it nearly enough. Bittman's book is one of my favorites, but I've never tried this one! I certainly will be trying it soon, though. I need great weeknight meals more than anything! I need to follow your lead and start cooking more from the freezer and pantry. It seems like I clean out my freezer every six months or so and throw out all kinds of things that would have made for a great dinner three months earlier.

I'm always ready for Jambalaya! and chicken and sausage are my favorite meats.

There are so many good recipes out there...I try to use my cookbooks more, but on occasion will use one I find on the internet. Sometimes I will see a recipe on the internet from a cookbook I own. That's the best of both worlds.

I'm also trying to use up what's in my pantry and freezer. Spring cleaning time!

I'm the same way with my cookbooks. Especially since I'm at school and most of my collection is at home, I use the Internet, especially Recipe Zaar, a lot. Your jambalaya looks awesome!

Love the detailed recipe and notes. Also seems like a great way to use up a few pantry staples :)