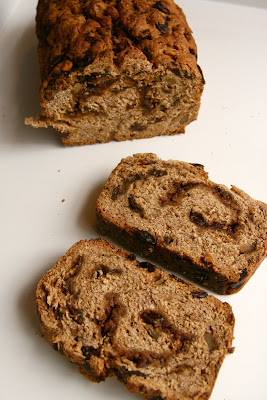 One day I was meandering unsuspectingly around the foodienet and suddenly I was ambushed by this bread on Jude's gorgeous site Apple Pie, Patis & Pate. I just HAD to try some. And since Jude was not around to make it for me, that left me to bake it.

The recipe was a giant step in complexity above any yeast recipe I'd yet attempted. Up until this point, all of my yeast experiments had been with direct rise recipes, but this one used an indirect method, relying on both a biga and a soaker. These are types of pre-ferments, which contribute to better flavor and structure of the finished bread. As far as I can understand it, during the resting stage of these predoughs enzymes break down the sugars within the grains, thus releasing the flavor. 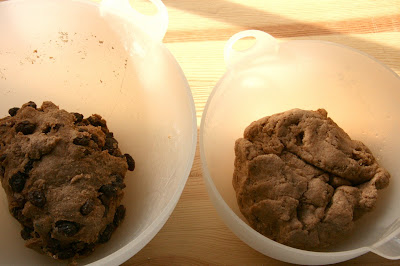 - I made a little chart to figure out the times to make each component of the dough and when to make the final dough.

- Mixing the biga and the soaker went very smoothly. One went in the fridge, one on the counter.

- When it came time to make up the dough, the biga and the soaker are combined with additional ingredients, then kneaded, etc.

- Taking one ball of dough (cut into 12 pieces) and another ball of dough (also in 12 pieces) and adding only dry ingredients (I re-read the recipe umpteen times: no additional wet ingredients) did not produce a "shaggy dough." In fact I couldn't get it to come together at all. Not with a spoon, and pretty much not with my hands. I had to knead it in the bowl before I could even get it to the bench to knead it. Using a hindsight as I sit here a month after baking this bread, I'm pretty sure I should have added a bit of water as I was kneading the dough. 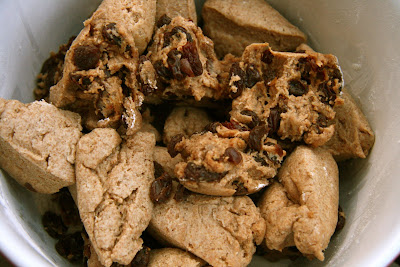 - As I kneaded the raisins would not stay in - they kept popping out.

- Back when I made this bread Jude's recipe had an error in the quantity of walnuts (he has since fixed it, thanks!) I finally ended up using 30 grams (1/4 cup). I didn't think I could incorporate any more nuts while also trying to corral the renegade raisins that jumped out at every turn. Literally.

- The bulk rise was really slow; it was supposed to be around 45 minutes, but at that point the dough had only risen from 3 to just under 4 cups. At 1 hr 45 min, it had risen a smidge more. My husband made a nice warm bath for the dough bowl: 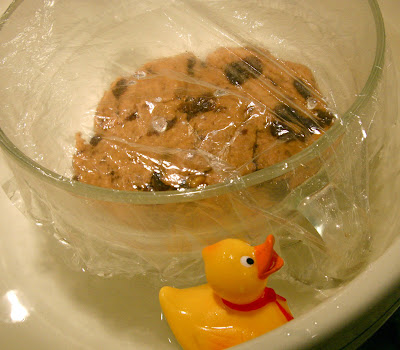 - The dough did respond, and began to rise! Finally it was at 1.5 the original size.

- Then I turned it out onto the counter, formed a rectangle, added cinnamon sugar and shaped the loaf: 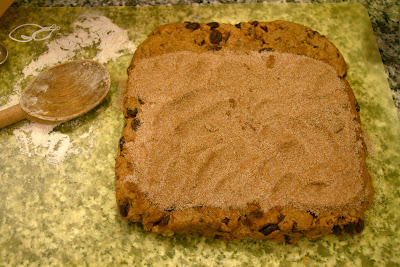 - For the proofing, we went back to more sloooow rising. The dough was supposed to reach 1.5 of the shaped size (and the recipe said around 45 minutes). After an agonizingly long amount of time (very late at night) the dough seemed to stall. It was risen a bit but not as much as it probably should have been. I gave up, called it "risen" and popped it in the oven.

- This bread smelled incredible - of yeast and cinnamon - as it baked. I checked the bread regularly. It was in the oven for longer than the recipe's time range, but it never did get above 190 on the thermometer I was using (the recipe specifies 195). At 1 hour and 18 minutes total I called it "done". 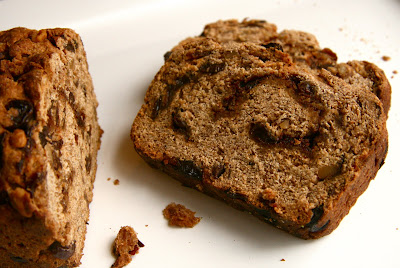 This was no refined wimpy raisin pastry! This is bread with some heft. It was very very dense, but it was quite nice toasted. And it really needed butter. The bread wasn't particularly sweet; the vein of intense cinnamon was a great counterpoint to the plain whole wheat/raisin crumb. You'd need to be a fan of the taste of hearty whole grain bread to have a positive view of this bread. I do so I did! Thanks, Jude, for introducing me to this recipe.

My very own copy of Reinhart's Whole Grain Breads book arrived in yesterday's mail! I want to take my time reading it, because he has wonderful explanations, tips, and guidelines on every page. After a bit more practice I plan to bake this bread again. I already know that I will mix the dough earlier in the day so that I'm not waiting for a slow rise in the wee hours of the night!

[update: After reading the original recipe in the Whole Grain book, I realized a few things that would have helped my loaf: Adding a few tablespoons of honey when making the final dough, and kneading the dough with wet hands.]

I'm sending this to Susan at YeastSpotting, a wonderful roundup of all things bready. Head over there and check out all of the breads that folks have baked up this week.
Posted by Nancy/n.o.e at 7:25 AM

Nancy, to be honest, I'm envious, not to mention inspired...it must be so much fun to be learning all these new techniques. I've been thinking lately that I don't do enough of that. This bread looks so good, and I'm so glad you liked it after all that effort. I made cinnamon raisin bread once or twice (with an oatmeal bread base, which was really nice - it's from Bernard Clayton's bread book), but it's one of those complex things you have to buckle down to. I will be buckling!

What a wonderful looking bread. I can only imagine how fantastic it must have smelled while it was baking!

This looks amazing!! I love cinnamon raisin bread, but I really dislike most store-bought loaves.
Can't wait to see what breads are in the future thanks to your new book!

Nancy, I'll be honest with you: I don't think I am ready to attempt this yet. Biga? Soaker? I think the only thing I have the confidence to do in this entire process is place the rubber ducky into the water bath. But when I work up to this level of complexity in my yeast bread baking, I plan to revisit this post. I LOVE hearty wheat breads, and the raisins are a bonus. Toasted and with butter, this would be a dream breakfast for me.

Your loaf looks amazing. It sounds wonderful too. The Whole grain bread book is on my wishlist.

Wow! That's quite a bit of effort for one loaf of bread. Thanks for the explanations.

You are really inspiring me! I can't wait to see what you make from Peter's book!

I have that book, I really like it. I haven't tried that many recipes though, because the whole wheat sandwich bread is so good that I keep making it over and over again.

Nancy, you've come so far with your bread baking. I remember when you first started. You're the expert when it comes to yeast!

Your bread looks fantastic. I can almost taste how toasty and delicious it would be with melty butter. Scheduling is key with bread baking; I have been there in the wee hours waiting for the rise to finish.

"Rubber ducky, you're the one. You make 'rising' so much fun." Yes, Virginia, Sesame Street IS an educational show.

I have never heard of a bread made that way. Good for you to try that one. It looks good. And you used to be afraid of yeast......

Wow! Mad props for such dedication! Your bread looks delicious. I can imagine it making a perfect breakfast, toasted with a little butter.

I was similarly seduced by the post and then ended up with similar results when I baked the bread. My dough was dry, it took a very long time to rise, and it wasn't sweet bread. I think with a bit of tweaking I could get the recipe where I want it, but instead I decided to put my efforts into another recipe completely. It's not 100% whole wheat, but it's moister and a bit sweeter -- Jeffery Hamelman's Cinnamon Raisin Oatmeal Bread ( http://www.thefreshloaf.com/recipes/cinnamonraisinoatmealbread ). I substituted some of the white flour for more wheat and added white whole wheat flour to up the nutrition. I also added a cinnamon sugar swirl when I shaped the loaves, because it's my favorite part of cinnamon bread! I still had trouble adding in the raisins and the rise was still pretty slow, but I was a lot happier with the finished product! good luck!

Thanks, Anonymous for letting me know of Hammelman's recipe - it's now on my list of yeast recipes to try.

I realized from reading the Whole Grain book today that the original recipe called for adding honey to the final dough, and kneading with wet hands. So that would have helped with the dry and the sweetness issues that we both faced.
Nancy

Great loaf, it looks wonderful. And an excellent and informative post. I love your notes, I think this is what food blogging is all about, being able to learn from other people's experiences.

sounds like quite the undertaking. i love that little yellow duckie that just popped out of nowhere! :)

Wow, sounds like you got a workout with this one! I love the duck--we have lots of those around here. =) I've borrowed PR's whole grain book from the library, but haven't added it to my collection yet. It's on my list, though.

Yum! All your food looks so yummy. Your coconut butter thins look like they're baked perfectly. Mine are a little overbaked, I think.

Okay, this is the last post I have missed and am catching up on...your inbox probably looks like I went crazy this morning. This bread is so amazing...way too much work for me, but I can just taste the goodness that oozes out of all those little holes...wow. Okay...I am officially caught up at the NOE site...now I can move onto something else! It's been a wonderful morning of looking at great food over here.

raisins are very harmful to dogs, causing renal failure , even in small amounts
showing a dog eating crumbs with a recipe/photo containing raisins may not be the best idea for those who don't know this??