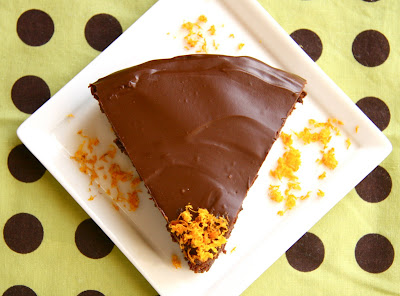 Back in 1981 when I started my first full time job, one of my co-workers brought in a home-made cake for a birthday celebration. It was my first exposure to one of those "made with baby food plums" cakes. I ate it, and it was pretty good, but I regarded the concept of baby food in my cake as akin to an alien invasion. I stopped being so wierded-out by baby food when I had children and dealt with those little jars several times a day. Well, OK, baby food meat was still totally awful to even contemplate, but I realized the fruit was pretty yummy.

This week's cake is kinda like that plum baby food cake. A prominent entry in the ingredients list is: prunes. Now prunes continue to have odd associations for me despite the efforts of the prune industry to rebrand them as "dried plums" and despite the fact that they really are dried plums. Technically they aren't any different or worse than the previously-avoided baby food plums. But I had serious qualms about the prunes until this cake was baked, cut, and tasted. And then, my word, it didn't really matter what was in there, that cake was fabulous! 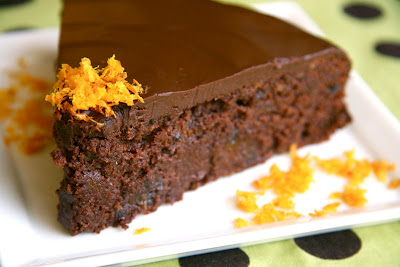 -I lightly toasted walnuts my walnuts before grinding them.

- Grand Marnier cognac was my choice instead of armagnac, mostly because I had it on the shelf and I didn't have armagnac (nor had I ever heard of it). I was talking with the liquor store guy after I made the cake and he said that Americans don't seem to have a taste for Armagnac so he doesn't carry it. He added that it was very similar to cognac. A little internet research shows that there are similarities and differences, as you can read here!

- This was a great recipe for me to use up odds and ends of chocolate in my drawer - in both the cake and the glaze I mixed a bit of semisweet in with the bittersweet chocolate.

- The prunes I used were very fresh and soft. They even looked like plums inside - they were still purple. (I've become a big fan of baked plums since making the Dimply Plum Cake about a million times.) I cut the prunes pretty small, but I might cut them even smaller next time and make sure they mooshed a lot when they were cooking.

- It was a little bit difficult to tell when the cake was done. Dorie says that a knife should come out "streaky." At one point I tested, and the knife seemed streaky, but the cake just didn't look quite done. I could tell it was moist enough that I wouldn't have to worry about drying it out, so I left it in the oven for several more minutes. At that point the knife was still streaky, but more clean than streaked. After cutting it I realized that it could have taken even a few more minutes in the oven, but it was great the way it was. 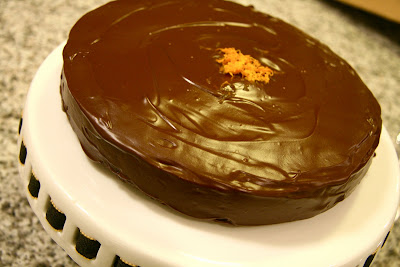 - I served this at book group and my testers were wild about this cake. One pronounced: "That's restaurant-worthy!" which I thought was fitting since Dorie riffed this recipe from a restaurant's signature dessert. I had no trouble splitting this cake up for everyone to take home. I kept that one wedge to photograph the next day.

The orange notes from the liqueur - and the zest - really came through. It was a nice orange + chocolate combination; just a little fruity and a lot of chocolate intensity.

The prunes gave fantastic texture to the cake without being really discernible, thank goodness. One of my testers called it "fudgy," which is a perfect description.

This is a grown-up, elegant cake. It's a perfect dessert for entertaining or a dessert buffet. It can be sliced very slender, and is rich enough to satisfy. It looks delightful standing up on the plate with that slick of chocolate on top.

This cake is definitely one that I will make again. My heartiest thanks to LyB of And then I do the dishes- for choosing this fabulous dessert for the TWD group to bake. If you'd like to bake this yourself, it's pages 279-281 of Dorie Greenspan's book Baking From My Home to Yours, or hop by and see LyB's post where you will find it online. 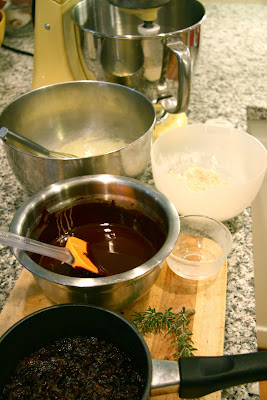 Just a few of the dishes this cake generated!

I am currently away from home and all traces of the internet. Before I left I scheduled this to post first thing Tuesday morning, and if I didn't make a mistake that's when it posted! [edit: well, I did make a mistake and this posted for a few hours on Sunday a.m. I took it off and rescheduled it for Tuesday, but I know it was in everyone's Google readers since Sunday - sorry!] If you leave me a comment, I'll try to come visit your blog when I return this weekend!
Posted by Nancy/n.o.e at 12:01 AM

This cake looks gorgeous! Like you, I don't always associate prune with awesome chocolate cake. But, after seeing this cake, I might be able to leave those negative associations behind. This cake seems soooo delicious!

Lovely job on the cake, Nancy! The baby food fruits and veggies don't bother me, but I could never bring myself to feed the meats to my girls. They got their protein from other sources until they were big enough to chew regular meat. =)

I hope you enjoy(ed) your trip.

Beautiful!! :) I haven't made mine yet because I don't have any alcohol on my shelf. Gotta go get some tomorrow since you can't buy liquor in Tennessee on Sunday. These are great tips though and I think I will try it with the same Grand Mariner that you had. I love orange and chocolate together!

I like how you decorated the cake. I'm sure it was restaurant worthy!

VERY nice with the orange! Especially the zest garnish. I agree - it WAS difficult to know when it was done - I underbaked mine for sure. But, as I told people - it's a "torte" - it's supposed to be that way. :)
I also couldn't find Armagnac - not sold in my "region" - whatever that means!
Nicely done Nancy!

Are you freelancing as a photographer for Gourmet magazine again? I just LOVE your presentation (that first photo is gorgeous!)...and as always, your ideas. Somehow, the combination of orange and chocolate is ok with me, the professed chocolate-and-fruit skeptic. Prunes? Well, I'm still not a convert...but this cake helped!

Grand Marnier sounds wonderful in this! Your cake looks fantastic, Nancy. :) Thanks for baking along with me this week!

Wasn't this just the best tasting cake? I loved it. I wish I had thought to use Grand Marnier though instead of brandy. I think I would have really liked that taste better. There's always next time! Excellent choice of liquor my friend. :)

Dear Nancy, I really agree with you this cake is wonderful ! I wish I could serve it to end a nice dinner !! I didn't dare the grand marnier but you are right it would be great ! Don't worry to answer I know you are trying to keep away from the pc !!

Your food styling is really getting professional-looking, Nancy. That first picture is fabulous! The orange zest is a nice touch, especially with the Grand Marnier. Only Dorie could find a way to make prunes so wonderful. I agree with you, though, I wish I chopped them up even smaller than I did. Next time, I might let the Cuisinart go to work on them. And there will most certainly be a next time! Oh, and don't worry -- I didn't peek when I saw that this posted early the other day. Beautiful job on the cake!

I love the addition on orange! your cake is purdy


I think the orange flavor would be wonderful in this.

your cake looks gorgeous - your glaze is just perfect. Hope you are having a nice time away from home

Your cake looks and sounds fantastic!

It looks fantastic, you did a wonderful job!

what a gorgeous cake, nancy, and what an inspired use of grand marnier. i didn't bake this week--well, i baked, but not this recipe. your post is helping convince this prune/dried plum skeptic to take the plunge.

Your book club must love you! Your cake looks fantastic! I hope you are having a fun vacation.

I used the Armagnac and really couldn't taste the difference between it and the regular cognac I've tried. When it comes to these things I don't have a discerning palate!

Your cake looks beautiful and must taste as good with the citrusy flavor of Grand Marnier!

you did a relly beautiful job on the cake! the grand marinier is a terrific swap --- just made a note in my book to try that for next time.

your cake looks great !! I have substituted the prunes to raisins..Will definately give prunes a try next time ..

Great Post Nancy. I agree, (however, I like prunes) that it cause a little hesitation for most folks. Once you sample this delight its all holds barred and let me at it. I loved it. I think I'm adding it to my fav's.
AmyRuth

Your cake looks beautiful. Grand Marnier was a great idea - I use it in another chocolate cake recipe that I love. I'll try that next time!

That is a fudgey looking cake. Looks wonderful. I never could face the meat baby food. To this day....

I missed your post last week, but the cake looks great! I skipped the cake and made a TWD rewind, Snickery Squares from last year.

Glad you tried this cake. I wasn't home nor had alcohol or prunes to bake this. Maybe another time. Your slice looks delicious and wish you could've wrapped me a slice! haha

Lovely photos...the orange zest is perfect on that cake to showcase the liquor inside. It was a hit here, too...I used rum as that is what I had. It was gone in no time and the guys were asking for another. Great job on your cake and your photography!