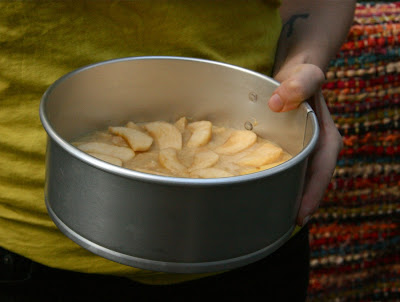 The past few months have brought a bounty of apple recipes into my life. I've baked apple bundt cakes (here and here), apple tart, apple tart cake, and apple pie. Not to mention apple breakfast bread, apple granola, apple bread pudding, a few batches of applesauce, and a repeat baking of my very favorite apple ginger cake. There were even apples in the cranberry galette I baked last month. I'll have to admit, however, that I've never paired apple with coconut. But Dorie Greenspan has, in this week's recipe for the Tuesdays With Dorie baking group, Apple Coconut Family Cake. There was only one way to see how that flavor combination would taste, so with the prospect of serving this cake to the members of my book group (who have been subjected to enjoyed most of the other apple recipes) I set forth to bake the cake.

- Amber Marie of the blog Cobbler du Monde chose the recipe, which you can find by clicking over to her post.

- We didn't have any yogurt in the house, so I used plain kefir. Actually, yogurt, kefir and buttermilk are all cultured dairy products and can be used interchangeably in baked goods.

- I combined the tail ends of a couple of bags of unsweetened and sweetened coconut, although I would have rather used all unsweetened.

- Instead of the dark rum I used King Arthur's boiled cider.

- By mistake I forgot to reduce the sugar to 3/4, and ended up adding a full recipe's worth of sugar. Luckily, Dorie's recipes don't tend to be super-sweet, so the 33% extra sugar didn't ruin the recipe.

- For the flavorless oil I used grapeseed oil. There's a huge bottle of the stuff in my fridge, and I'm always glad to have a chance to put it to use. 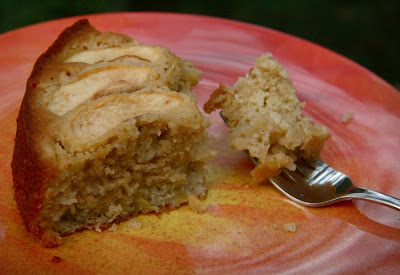 Dorie calls this a "family cake" which sounds cozy and comforting, and just a bit rustic. And that's a perfect description for the cake, which I served to friends as well as family. I kept asking my tasters, "this isn't as good as some of the other apple cakes, right?" and the response kept being "maybe not, but this is really good" and then they cut another piece. I had to hide a piece to photograph the next morning, and even then, I was only able to get a quick snap before the cake became breakfast.

It really was a delightful cake: moist, soft, and a bit chewy (from the coconut). The coconut flavor was quite a subtle presence; taking a back seat to the apple.

So there you have it. A lovely, homey apple cake that you can easily serve to guests. And to family too!

I hear this cake actually tastes great. I use my quilt group as taste-testers, like you use your book group.

Your book group is very lucky to be the recipients of all the apple-loveliness. Great minds think alike..l took a nearly identical picture of me holding the cardamom bread for next week!

Haven't worked up steam to make a dessert yet this week, so still in the "maybe" stage here, although we love all the ingredients. It's our annual dessert-ed out time, I think, we experience this about this time each year...I think it is the abundance of food around during the holidays. Anyway, you have a great recommendation for making it, so I will, at some point. Yours looks wonderful, and I do trust those critics of yours over there!

I want to try this...but even more, I want to bookmark this apple cake encyclopedia! :)

Couldn't eat this one because of the coconut, but my tasters really enjoyed it.

Glad this turned out so well and that your book club gobbled it up! :)