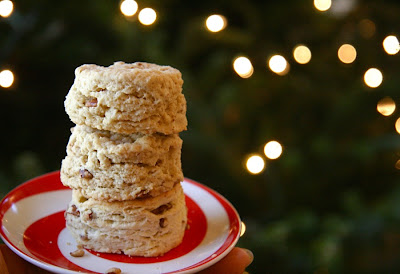 One of the appealing parts of the Tuesdays With Dorie baking group is the variety - and essential unpredictability - of the recipes selected. With a different "host" each week, the chosen recipes reflect not only the season but also the tastes of the various TWD members, as they choose the recipes from Baking: From My Home to Yours which attract them.

At busy times of the year, it can be a little bit tricky to fit the TWD recipes into the menu, planning, so this week, just like at Thanksgiving, we were free to choose a "rewind" recipe; something that we previously missed. After a bit of searching and thinking, I decided to choose a breakfast item. We had house guests for Christmas week, and at such times it's nice to pull something fresh from the oven first thing in the morning. 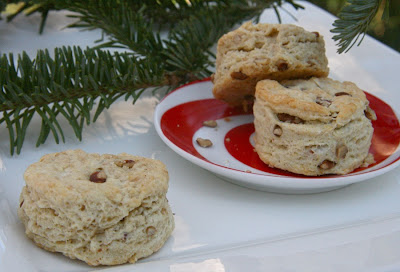 - These biscuits were originally chosen by Ashley of Eat Me, Delicous, in February 2008. You can find the recipe on her post.

- I baked these for breakfast on Christmas Eve and I was doing a million things at the same time. I mixed, rolled, cut and popped the biscuits in the oven, and was in the middle of congratulating myself on what a great job I'd done, when I realized that I'd left out the brown sugar. Luckily the biscuits are incredibly easy to throw together that I whipped up another batch immediately. This time I mixed up my steps and added the liquids without working the butter into the flour first. So I tried to mix the dough enough to incorporate the butter without overmixing and making the biscuits tough. No matter how they turned out, I wasn't going to bake these a third time just to get it right. Too much else on the "to do" list on Christmas Eve.

- I used a cutter that was slightly smaller than the specified 2 inches. Despite my worries about them, both batches of biscuits rose quite well in the oven, and I ended up with very tall petite biscuits.

I ended up liking both versions of these biscuits. The unsweetened ones were particularly good with salted butter or a piece of smoky bacon. The brown sugar version had a nice sweet edge, but I wouldn't exactly say that they tasted very strongly of caramel. The pecans provided a nice textural interest. From the way these biscuits disappeared from the serving plate, I'd say they were a big hit with everyone on Christmas Eve.

mmm those sound delicious! This is one I haven't had the chance to make yet. They will now have to go on it. :) Glad both batched turned out so well!

Your biscuits look so tall and inviting. And I love your swirly plate.

Another recipe that I don't think I've made since it was first picked. =) Those look delicious, Nancy!

I bet you could have sprinkled some brown sugar on the tops about 5 minutes before they were finished baking.

Those are wonderfully tall biscuits! I remember mine - woefully flat :P

Sweet or savoury these are a winner!

I will have to try these. I love biscuits! Have a wonderful holiday.

This is one of the recipes that made it to my rewind short list, and they sure sound easy (even if you did make them twice!)

When I went to put something in the microwave after last week's crumb cake, I discovered I had melted the butter but never added it to the cake. And without butter, it was still good. Dorie's recipes are fabulous, aren't they?

These look and sound delicious. I love the tall petite version.

Made these this morning and they were really pefect for a quick breakfast. Also liked the crunch of the pecans and the tang of the sour cream.

You must have put more pecans in yours. Look at all those little bits.

Two things: I love the picture with the biscuits and the blurred xmas lights in the background. Second, I love knowing you forgot the brown sugar..makes me feel better about my culinary mistakes!

Your biscuits look great! I thought about making these as well but I settled on muffins instead. I still want to try these though.

Maybe I will make these, you make them look so great!

These are on my Dorie list, so I'm glad to have your endorsement! I hope you had a wonderful Christmas (did you have a white one?) and a very happy new year.
Audrey

Those are beautiful tall biscuits, Nancy! I love seeing what everyone makes on the rewind weeks. It makes me laugh that you were "doing a million things at once" when you made these, because that's exactly what I was doing when I made my TWD last week.