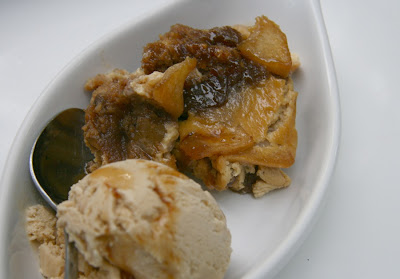 If you don't like bread pudding, this looks like an ugly mess with ice cream, but if you do, this represents a delicious confection!

One thing I've learned as a food blogger is that it really only makes sense to post food dishes in the appropriate season. Hearty foods in the cooler months, cold salads in warmer ones, and so on.

That doesn't mean, however, that I prepare food that is solely redolent of the current season. In the privacy of my kitchen I might be baking pumpkin bread in March or simmering a hearty beef stew in June. But it's not likely to be reflected on my blog. I'll take the photos and write up my notes and save the draft until it feels more seasonally appropriate to post.

Lately I've been eying my stash of apples, which have been hanging around the fridge since at least late winter sometime (apples last nearly forever). Last week I cooked up a big batch of homemade applesauce, some of which I used in applesauce muffins for my mother (saved n the "drafts" folder until the fall.) I also baked Dorie Greenspan's Oatmeal Breakfast Bread, which calls for applesauce (saved in the "drafts" folder until the recipe gets chosen for TWD. Sneak preview: it's delicious!) That left me just a few more slightly shopworn apples kicking around.

Enter the genius of Liz of the blog Cake... or Death? (if you think the blog title is cute, just check out her blog!), who brilliantly chose Apple-Apple Bread Pudding for this week's Tuesdays with Dorie selection. The recipe is beautifully adaptable - Dorie gives instructions - for seasonal produce, yet it allows folks like me to use up those lingering apples in the back of the produce drawer. And I can post an apple recipe in May and not have to wait until September. See how that works? Perfect.

- Liz has the recipe on her blog post, but as always I urge you to buy the fook Baking: From My Home to Yours.

- There are actually a fair number of steps and elements required by this recipe, and I decided to make it a bit more complicated. Here's the basic method: take slices of a plain, preferably buttery, bread, cut it in triangles, spread one side with apple butter, layer it in a baking pan with caramelized apples in between bread slices. Then pour a custard over everything, let it soak into the bread, and bake in a water bath until done.

- I was planning to bake some yeast bread for this recipe but then I realized that there were 2 slices remaining of Dorie's oatmeal breakfast bread. (You can find the recipe by clicking here). I baked my loaf with lots of homemade applesauce, along with whole wheat and oat flours, palm sugar, currants, pecans and some fragrant spices. I wasn't sure how a quick bread would work as a bread pudding base, but I figured it was worth a try. I guessed that my bread was the right amount for 1/3 recipe of bread pudding. 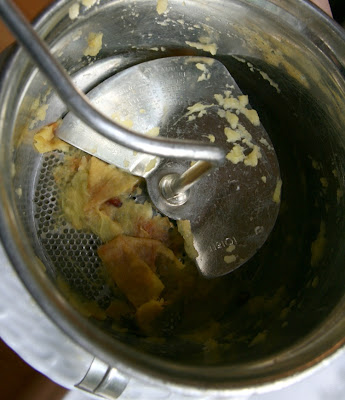 My mother gave me her old food mill last year; it has come in surprisingly handy. In this recipe, the apples are put through the mill, core, peel and all.

- I decided to use up some more apples by making my own apple butter. I found an apple butter recipe on the blog Simply Recipes. The only real change I made was to use palm sugar. While the apples were cooking, all I could smell in the house was the apple cider vinegar, but luckily the finished apple butter tasted very nice. Apple butter is not difficult to make, but it has several steps and takes a fair amount of time and some specialty equipment. I got to use my mother's old food mill, which I've actually used on several occasions in the past year. 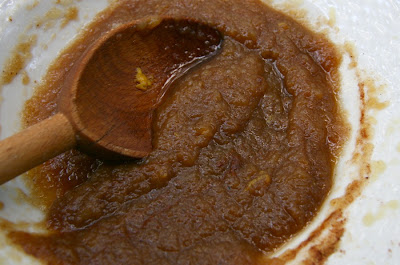 This was the apple after being cooked, milled, and combined with sugar and spices. The next step was more cooking/thickening.

- I changed up the custard ingredients just a bit, using boiled apple cider from King Arthur - a very intense apple syrup - instead of vanilla, and palm sugar for a sweetener. Also, I was out of milk, so used a combination of cream and buttermilk.

- Although dried fruit is pretty common in bread puddings I've known and loved, I've never heard of a bread pudding with fresh fruit. Dorie includes caramelized apples in this recipe, which I made with Honeycrisp apple and granulated maple sugar. 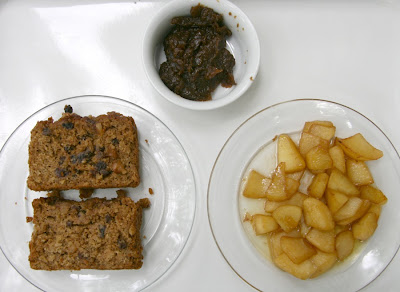 - When I assembled the bread pudding the slices of bread were too thick to layer and too delicate to handle much without crumbling. I just spread apple butter on the bread, tucked the caramelized apples around as best I could and poured custard into the dish until it looked "right". There was a lot of custard left over. Consequently my bread pudding had a higher proportion of apples because I didn't use all of the custard and I didn't have a ton of bread.

- I popped the pudding into its water bath in the oven without giving it any soak time. I baked it until the custard was set.

- Dorie lists an optional glaze for the top of the pudding, using apple jelly boiled with water. I could not resist an easy opportunity to add another form of apple to my pudding, so that's why it is so shiny in the pictures.

- I served the warm bread pudding with leftover burnt sugar ice cream, and drizzled it all with some more of the King Arthur boiled cider syrup. 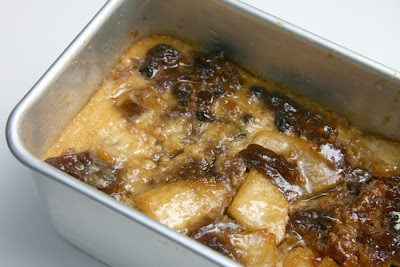 An apple jelly glaze made the pudding nice and shiny!

Bread pudding haters are legion, and I'm not sure that my pudding will convince any of them to change their views. As I look at the pictures, everything looks messy and smooshed-together, and really, it was that way. But a spoonful of this mishmash creation is Bread Pudding Heaven combined with Apple Heaven.

The caramelized fresh apples - along with the apple quick bread, apple butter, boiled apple cider and apple jelly - took this from being a typical bread pudding to something quite different and very complex. It reminded me a lot of an apple crisp, but without the crisp. It was soft but firm with a hint of spice, and the currants, nuts, and whole grains of the quick bread lent the pudding a bit of heft. All of the many elements combined together to produce a lovely effect.

This dessert was perfect when eaten warm with ice cream, but proved irresistible cold from the fridge. Thanks, Liz, for the great pick; it's the best thing to come out of my kitchen in quite a while!
Posted by Nancy/n.o.e at 9:42 PM

You did go for the complete apple experience! Your photos are lovely in spite of this being another brown baked good that is impossible to make look appealing. I'm so impressed that you made your own apple butter!

your changes sound amazing! i was excited to use up some of my leftover apples too, especially in something so delicious! (and i also ate it w/some burnt sugar ice cream tonight :)

There is nothing unappealing about this to me at all. Give me a good piece of bread pudding like this one and I'm in heaven.

Holy smokes that looks fabulous. And complicated. I opted for easy. I always forget about my boiled cider...

I love that oatmeal breakfast bread...how cool you are to try it in a bread pudding. (For me, there are always some slices at the end of a tea bread that are a little past eating stage by the time I get to them). And funny, too...I'm coveting my mom's food mill. I don't want to buy one, and she doesn't really use it anymore, and...

I'm so glad your experiment turned out well Nancy! All of that apple goodness must have been delicious. I can't tell you how impressed I am that you can save posts for so long - you must take wonderful notes. If I don't post something within 3 days of making it I've completely forgotten everything :)

I love how you incorporated so many apples into the recipe! Your pudding looks great (I like bread pudding). I used not like when we'd have an unseasonal selection for TWD, but now I think it's kind of fun.

Wow, that's a lot of apple! But that's good, since I love apples. =) One of these days I'll have a chance to try this one. And I bet it was fantastic with the caramel ice cream.

You've put a lot of love into this recipe...this sounds and looks (in this bread pudding lover's eyes) so delicious!

So funny that you mention cooking for the seasons. I always feel like I'm breaking rules when I make pumpkin pie during the summer mos.

mmm..sounds fantastic. i'm itching for someone to pick tha tbreakfast bread, btw. it's number 1 on my "unchosen" list!

That looks so good! I also made my own apple butter. I can't wait to try the oatmeal breakfast bread :-)

Oh yeah, it looks delicious to me :)

I think it looks extra special yummy! Way to go with the apple butter, that looks super tasty.

I told myself that if I wasn't going to make this I really shouldn't read any posts about it either, otherwise I'd end up getting non-maker's remorse. And sure enough, now I have it. And the sad thing is that what ultimately put me over the "not making" edge was the apple butter - as in, I didn't have it and didn't feel like buying it. And here you are making your own (and it looks fabulous, and had to be so much better than store bought!) All of your modifications and special touches look fabulous!!This is going to be at the top of my list next time I make bread pudding (which, after reading your post, will be sometime well before next fall!)

Bread pudding heaven is right. So many apples. I didn't do the glaze on top but it would have been extra tasty.

I love reading your posts. The information, you share, is worth more than words can say.

I have never had bread pudding and since hubby has celiac and we never have extra bread, I passed this one.

Very impressed! How funny, my mother gave me her old mill a few years ago (haven't touched it) - but now that I know you can make apple butter... I'm there! Thanks for the great recipe! And the pudding looks wonderful - especially with all of your homemade, personal adaptions - truly a nostalgic, delicious treat.