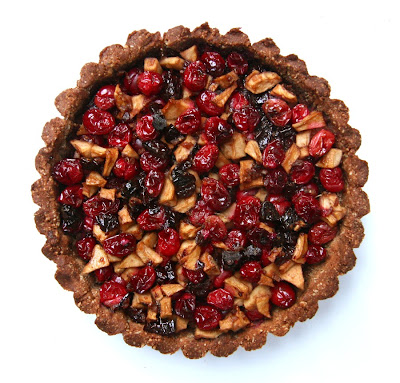 This week's Tuesdays With Dorie recipe is Cranberry Lime Galette, and yes, that makes two cranberry recipes in a row for the bakers of TWD (and three cranberry recipes in the past four posts for the readers of The Dogs Eat the Crumbs!) This bothers me not a bit because I adore cranberries. I always have a jar of homemade cranberry sauce in the fridge (see this post and this one), and I buy bags of fresh cranberries for as long as the local markets sell them, and squirrel them away in the freezer for the times when I can't find fresh berries.

Cranberries are a wonderful, bright counterpoint to roast meat or buttery baked goods. And speaking of buttery, I'm going to resist comparing this recipe to last week's because, well, they're as different as apples and oranges - literally, since last week's cake paired oranges with the cranberries and this week it's apples that join the cranberries. 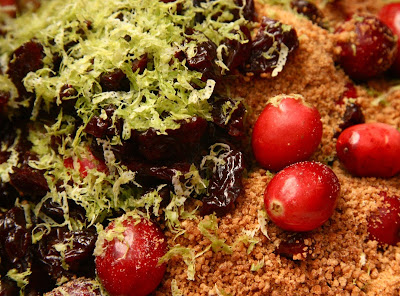 - Whitney, April, and Elizabeth of Celestial Confections chose the Cranberry Lime Galette, and you can find the recipe on their blog today.

- A galette is a free-form pie, baked on a cookie sheet. Rolled-out pie dough is pulled up and tucked like a blanket around the fruit filling mounded in the center.

- I made a full recipe of the cranberry mixture, and divided it into a small galette with regular pie crust, and a medium tart with a gluten/grain free crust. 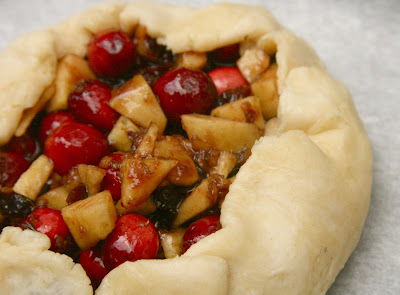 - My freezer had a half-single recipe of pie crust, which rolled out to a 7 inch circle. I marked the inner circle at 4.5 inches, and ended up with an adorable little galette.

- For the gluten/grain-free tart, I used a variation of the nut crust that I posted here, this time with pecans, almonds, and coconut flour.

- The filling for this galette contains fresh cranberries, lime zest and juice, apples, chopped fresh ginger, jam, and, optionally, plump dried cranberries. I didn't have any of those on hand, but I did have some plump dried Montmorency cherries from Trader Joe's, which I used instead, cutting them in pieces first. Continuing the theme, rather than raspberry jam, I used black cherry jam.

- An 8 ounces bag of cranberries yielded 2 cups, once I discarded a few soft cranberries

- The 1.5 inch piece of fresh ginger specified in the recipe produced nearly 1/4 cup when chopped. Did you know that you can throw ginger root right into the freezer and it will peel and grate perfectly when frozen? Another tip: scrape the ginger with the edge of a spoon to peel it easily. I did let the ginger thaw before chopping it; didn't want any knife accidents.

- My lime was pretty large, so I probably ended up using extra lime juice.

- To balance all of the tartness, I used a bit more chopped apple - 2 smallish ones. I don't know what kind of apple they were, since they were from my farm box, but they were fairly sweet.

- I didn't want to use bread crumbs in the tart since I was keeping it gluten/grain free, so I used a mixture of coconut flour and ground hazelnuts to line the dough. Because I was lazy, I used the same mixture for the galette as well. 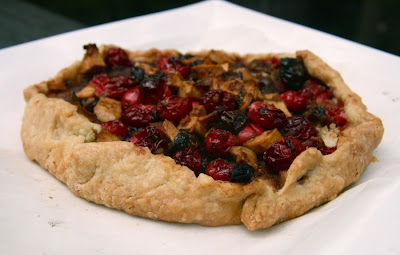 I served the galette with whipped cream at the end of our family dinner on Sunday. My husband was bowled over by the flavors, and happily welcomed a generous second helping, saying, "This might be the best pie of any sort I've ever eaten; and I've eaten some good pies, too, if you catch my drift."

I'm well aware that his is not going to be the universal response to this galette. It is brash and bold, fresh and tart. The flavors are strong, but quite balanced. The cranberries are straight-out bitter/tart. The apples add the sweet note, the dried cherries amp up the flavor, and the jam combines with the lime and the ginger and the sugar to make a vivid, sweet glaze. The whipped cream (I used unsweetened) was a perfect accompaniment to the galette; it performed the welcome job of mellowing the flavors.

We enjoyed the tart also; the strong taste of the cranberry filling stood up nicely to the sturdy nut crust. All in all, this recipe was a winner, one that I wouldn't mind seeing on the Thanksgiving dessert buffet.

Another way to prepare this recipe would be to bake it as a one-crust pie, and add a streusel topping, which would moderate the tartness of the filling somewhat.
Posted by Nancy/n.o.e at 1:11 AM

This was another cranberry winner here, although it was all mine once again since it contained cooked apples. I loved the tartness of the filling. Both of your versions look delicious.

Ooh, I like your idea of adding streusel. I will make this at some point, but just didn't get to it yet. Both your tart and your galette look lovely.

My husband said the same thing...and I think they have eaten more than their fair share of baked goods in the last few years!

Oooh, I'm so glad to hear that ginger can be frozen. I'm always left wondering what to do with the unused portion.

Your galette looks perfect. I'm glad you enjoyed it.

Your tart is beautiful! I added more apples so mine was a little less tart, but still great with the cranberries.

It was a perfect balance of sweet and tart. I used orange instead of the lime and liked the little hint of flavor it left behind.

Couldn't find any decent ginger and so left it out. Won't next time.

Love the rustic-ness of this one.

Very impressive...the sounds of it all, and the looks of it all. I haven't made this yet, debating whether I will at this point, but the fact that Jim liked it so well, and I usually like what Jim likes, I just probably should make the time and get it done.

Terrific tart, all these flavours together must be ....huuummmm!!!


I want to show you a blog of hand made craft for all girls around there!

i LOVE the cranberry/lime zest shot, i can't stop staring at it!!

I remember you tweeting how well received this one was. I love your ginger tips (I usually use the back of the knife I plan to chop it with to scrape off the peel, I never knew you could use a spoon!) Ginger makes everything better, and it sounds like it did its magic with your two variations.

i can't get enough of cranberries when the weather turns cool, and we loved this one, too. i like your suggestion of turning this into a streusel pie...

Your early review helped me decide to make a variation because I know this one would have been too tart for me, so thanks for that :) Both your tart and the galette are gorgeous! I'm with you, I'll be cleaning out my freezer and stuffing it with cranberries before the season is over.

I love the way you describe the taste of this; that is very helpful since I didn't actually get to taste it myself, and my tasters don't always provide me with the level of detail that I'm looking for. Glad that this was a hit in your house -- the thrill of serving someone a new favorite/almost favorite dessert just never gets old, does it? Beautiful looking desserts!