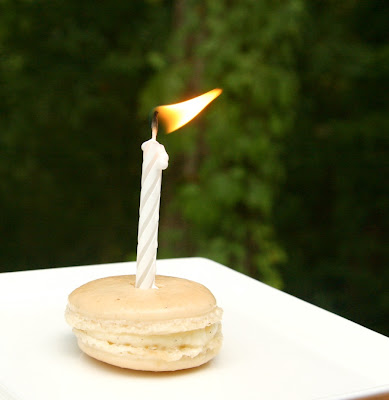 Today is the 1 year anniversary of The Dogs Eat the Crumbs! When I clicked "Publish Post" for the first time last July 15, I had a bunch of plans and a few expectations, but I could never have predicted the journey that the blog - and I - have taken . Some of the things I planned haven't happened and many things have happened that were totally unexpected. Through it all I've had a great time in my kitchen and on my computer, have discovered great food to share with family and friends, and have found clever, funny, thoughtful and kind fellow bloggers who have added so much to my food-blogging experience.

And if that's not enough reason to celebrate, this is my 250th post here!!! Either one of these milestones would be reason for a party, but together? Well, I can't keep to the constraints of a single blog post. You know how fun it is when your birthday gets stretched out over a couple of days, or even weeks, and you have several different celebrations? That's how I plan to observe my blogiversary/250th post.

Today we'll have a celebratory baked good, and over the next several posts, I'll share some of what I've taken away from a year of food blogging; lessons learned and recipes discovered. And I'll have a giveaway of one of my favorite things! So watch this space in the coming days. 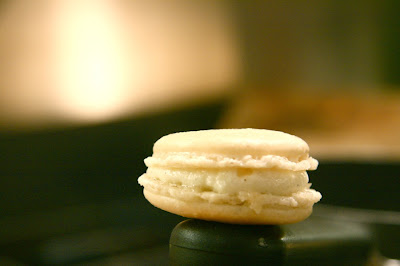 I had planned to celebrate my blog anniversary with a post about a cake. I even picked out the cake recipe I was going to bake: Nick Malgieri's Perfect Birthday Cake, a yellow cake with chocolate frosting (my very favorite flavor combination). But instead, here I am posting macarons, and in a way, it really is the most appropriate subject for my blog's 1 year anniversary.

Before I began food blogging I didn't have the foggiest idea what a macaron was. Coconut macaroons, now those I knew, because my dad was a huge fan. But almond macarons were entirely foreign. French to be exact. Parisian bakeries are filled with macarons, apparently, in every color and flavor imaginable (see, eg., Ladurée, Dalloyau, Pierre Herme) These technicolor pastries consist of two almond/sugar patties sandwiching a flavored ganache or filling. 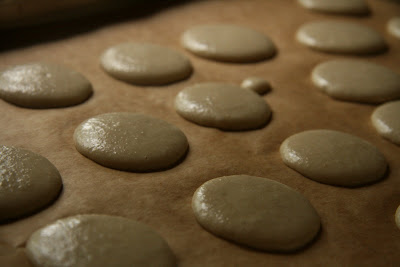 Macarons are tricky and exacting to bake, though, and even after I was aware of them, I didn't have a great desire to bake them myself. For those over-achieving baker-types who did want to tackle macaron-making, I knew there was a wealth of information available, a daunting amount, actually. I'd gathered that you want your macarons to have "feet", which are the frilly edges at the bottom of each half of the sandwiched pair. 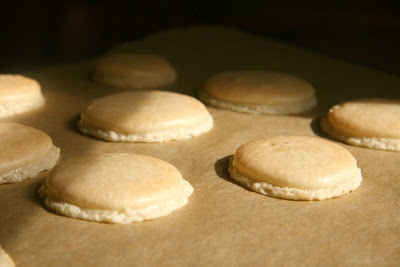 So it took me by surprise a week or two ago when two of my baking friends decided to bake macarons and compare notes via Twitter, and I found myself jumping in to join them. My excuse? I had lots of egg whites to use up (a by-product of ice cream making and some yolk-intense Tuesdays With Dorie recipes.)

While I was waiting for my friends to be ready, I scanned an online article or two about macaron-baking. There are apparently several tricky patches that must be navigated en route to making successful macarons. (Helpful macaron info can be found here and here)

The recipe we followed was from Aran of the blog canelle et vanille. Check out her blog - it's among the most beautifully styled and baked on the internet. She features lots of cool macaron flavor combinations. (eg. raspberry and pink peppercorn) For some other beautiful macarons and unusual flavors, look at the Bonbini blog, here.

The macaron-baking process was a little intense, and I made some mistakes along the way. I might have under-whipped the egg whites, and I'm pretty sure I over-folded the whites with the almonds. I have very little experience with piping, so even though I traced circles from a template onto my parchment paper, I couldn't manage to pipe inside the lines, or at times even near the circles. My macarons had air bubbles, they were of wildly varying sizes, they were a bit flat and a tad undercooked, but they had feet. And they were beautiful to me! 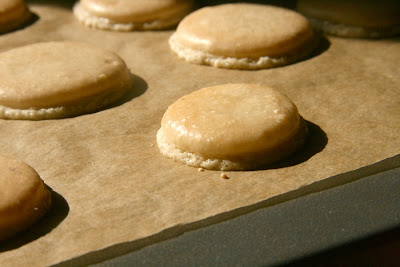 I had a few macarons left, so I made up some milk chocolate mocha filling (the recipe is on this post) and it tasted divine. I had lots of trouble getting the right temperature/consistency for piping it, so the pictures are terrible, but they were definitely the tastier of the two. 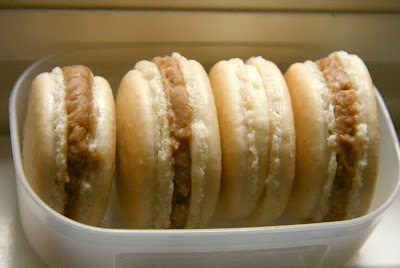 I had a blast baking these with my blog friends, and I learned a lot. I can see what the fuss is about, because the light crispy outside and chewy almondy insides along with soft filling is a seriously delicious experience. I'm already planning for my next flavor combinations - thinking citrus. Or maybe coffee...

Thanks for reading. Tune in for my next post which will be a giveaway!
Posted by Nancy/n.o.e at 10:24 PM

Happy Blogiversary! And congratulations on the anniversary too! Thanks for all the tips links for the macaroons- maybe someday I'll be brave enough to attempt them :-)

They look like they turned out great! I'm OK with white chocolate but it does sound like it would be too sweet in a macaron. Coffee filling sounds delicious.

Happy blogiversary - love the photo of the macaron with a candle.

Congrats on your blogiversary and 250th post! And the macaroons look aaaaamazing!!

WOO HOO! Happy Blogiversary! And you even busted out the mac's - good for you!

Congrats on your blogiversary! You have an amazing voice and I truly enjoy your posts. I'm in awe of your macarons! Definitely going to try these when I have the time to enjoy the process.

A big, French "Congratulations"! Wow, what a wonderful celebration - macaroons. They are stunning - and I know how hard it is to get the "feet". I haven't even tried yet, so hat's off to you Nancy! Serve them for the Julia & Julie movie or the re-release of "Mastering the Art of Macaroons". You've inspired me to try these!

Congrats on your blogiversary! Mine's coming up in two weeks... Those macarons look so good, I love the first picture with the candle: amazing!

Happy Blogiversary and 250th post! I am so impressed by your cooking and baking skills and the gorgeous photos on your blog with each post.

These macarons are lovely. I love to eat macarons but could never imagine baking them myself--kudos to you!

Oh, congratulations!! And congratulations!!! and what a great recipe to celebrate with. These are simply gorgeous. And I'll look forward to the rest of the extended celebration, and beyond, as posted here by one of MY favorite clever, funny, thoughtful and kind fellow bloggers!
Audrey

Oh, Nancy! I think the pictures are really pretty great. Congratulations on your anniversary. Time certainly does fly, doesn't it? I absolutely enjoy your blog and all of your posts. Keep up the great work!

Happy Blogiversary Nancy!! I wish I'd found your blog (and you) sooner! I always enjoy your posts and I look forward to the extended celebration :)

Your macarons look terrific and I love the flavor combinations. I have got to try these.

Ive been really wanting to make maccaroons - yours turned out beautifully!

Aren't we just the happiest crew of people ever that you decided to start a blog last year??? Yep, we are! Happy Blogiversary and 250th post! The Macs look really really beautiful...and on your first attempt, too! Great job.

These look great. Happy blogoversary. Looking forward to the next year and reading another 250 posts.

Happy Blogiversary! And how perfect to celebrate with some beautiful macarons. I always enjoy your posts - keep it up!

Happy Blogoversary!!!! Your macarons look wonderful! You have feet! I've thoroughly enjoyed getting to know you here and on Twitter. I look forward to your next year of blogging.

Congratulations! And don't these look like the perfect way to celebrate?

Happy Blogiversary! And congratulations on making 250 posts in 1 year! WOW!
Your macarons look fantastic! Macarons have been on the top of my list of things I want to bake but I've always been intimidated by them. I'm going to have to follow your example and just go for it!

Happy Blogiversary, Nancy! And 250 posts in a year is quite impressive. I'm so impressed with your macaroons -- they look just gorgeous.

Happy Blogiversary!
What a great way to celebrate, beautiful macarons. I have never made them before. I'm scared to even try!

Happy Blogiversary, Nancy!!! Your macarons are gorgeous! Look at those feet I also did not know a macaron from a macaroon before blogging, but I have wanted to make macarons ever since I learned of them. They have seemed a little daunting to me however, reading about how tricky they can be, but yours look and sound so scrumptious, I think they'll have to be moved farther up on my list! Congratulations on all of your accomplishments over the last year, I hope this next year is equally as fruitful for you!

Congratulations, Nancy! I love reading both of your blogs. And I love the macarons, which I have yet to make!

A beautiful Blogiversary post!!
One day I will make Macarons but that is yet to come.

Nancy, those are beautiful and your photos are sweet. I think its nice that you had a good time and co-baked with Twitter friends. I watched your twitters he he. Right there with you on the white chocolate, so I'm glad you were able to find a flavor you liked. Happy Blogiversary!!! You have a fab blog and we can all tell you have enjoyed yourself. I'm sure the hubs has enjoyed the fruits of your labor as well. Plus you are, in fact, the "Scaling Wizard!" That's a compliment! :-)
AmyRuth

Congratulations on 250 posts! Your macaroons look so yummy and your photos are stellar.

Happy Blogiversary!
Beautiful macarons. I haven't made any in forever, so maybe I will make some soon.

I have yet to make macarons, but they sure do look and sound tasty and there are so many different varieties.Wow, 250 posts in one year--you rock!

Happy Blogiversary. AND 250 posts. I hope you keep going for at least that x 10. I so so enjoy both of your blogs.

Happy blogiversary! Your blog is amazing!!!

Gorgeous! Thanks so much for baking macs with me :)

Your macarons look perfect with their little feet! I need to get up the nerve to make them already!

Happy blogiversary!!! Your macarons look great. Much prettier than mine. =) I want to try again soon, to see if I can get them to come out better.

Happy blogiversary again! I sure am glad you decided to start a blog last year. You knocked those macarons out of the park, my friend. Look at those feet! And your flavors sound incredible. I can't wait to try these sometime. I never heard of them until I started food blogging, but now they are on the "things I must do before I die" list.