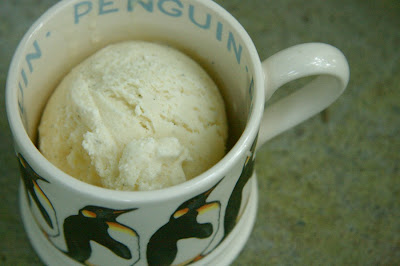 It's been awhile since I last posted ice cream, but I don't want to wait a minute longer to share a wonderful and easy vanilla ice cream. I used the recipe from The Perfect Scoop by David Lebovitz (which, by the way, is a "must-have" if you plan to make your own frozen treats.) The best thing about this ice cream is that it is Philadelphia-style, that is, an ice cream made without an egg-yolk custard base. Although it does require heating cream to dissolve the sugar and steep the vanilla bean, there's no tricky tempering of eggs and absolutely no thermometer involved.

- The recipe calls for a whole vanilla bean, but the beans I have seemed quite long and, call me stingy, but I didn't want to devote an entire bean to a batch of ice cream. I used half of a nice fresh bean - about 2g. worth.

- Lebovitz gives the option of using 3 cups of cream or 1 cup milk with 2 cups of cream. While I know that the all-cream version is bound to be even more wonderful, I was afraid to spoil our taste for the slightly more healthy version with milk so I just went straight to the milk + cream option.

- The first time I made this, the scraped vanilla seeds were very clumpy so I ran the vanilla and cream mixture through a very fine mesh strainer but lost a good many of the tiny seeds in the straining process. My blogging ice cream guru Wendy of Pinkstripes suggested rubbing the scraped vanilla seeds into the sugar and adding them together to the cream to steep. On subsequent batches that's exactly what I've done.

- David Lebovitz says that even when he uses a vanilla bean, as in this recipe, he still adds some vanilla extract because it is his theory that the alcohol in the extract conveys different dimensions of vanilla's flavor. I measured in the requisite amount of vanilla extract and then I added some vanilla bean paste (just a tiny bit), trying to replace some of the lost seeds and make up for the smaller vanilla bean that I'd used!

Vanilla is my husband's very favorite ice cream flavor, and this recipe has become his nightly dessert. I've made custard based vanilla ice cream, but not only is Philadelphia-style easier, we actually prefer way it cleanly conveys the essence of the cream and the taste of the vanilla. I'm pretty sure I'll need to keep a quart of this in my freezer at all times.

Great looking ice cream, I love that book, I also tried the French Vanilla version. I agree the book is a must.

Oh, I don't think you're stingy! I just bought some vanilla beans, which would make my vanilla ice cream cost about $12 a pint! :) I still have PS from the library for another week, but I think I will go ahead and buy my own copy. It (and you!) are too inspiring! (still love that mug!)

Jim's the guy...the milk bread, the vanilla ice cream being a favorite...yep, I think I am ready to trust Jim on most anything now. This looks really really great. I think I could have some for breakfast, don't you? I mean there is milk in there and all. You can't do too many of these ice cream posts...they are all great.

I do love The Perfect Scoop, what a great book. The ice cream sounds awesome. I have been in the habit of using a good vanilla paste lately. Maybe out of laziness, but I find it works well in place of bean seeds.

Vanilla is my favorite flavor of ice cream, but I haven't tried the recipe out of the book yet. Thanks for giving me the kick in the pants to do it!

I have been dying to try ice cream this way! It is soo hard to choose a recipe from The Perfect Scoop. They all sound so good.
I like the fact that this isn't egg-based too. It seems easier.
Thanks for all your tips.

Yum. =) I think I need to make another batch of this. I normally like French vanilla better, but this ice cream may change my mind. It was really good.

If I ever face the reality that is the weight I've gained since joining TWD, an eggless vanilla ice cream will really come in handy!

I REALLY need to spend more time with this book!! Looks great and if we had some, I'd be right there with your husband and his nightly bowl of ice cream. A delicious treat.

Vanilla ice cream makes me so happy. It is my absolute favorite. And making it at home is such a special treat. Glad you liked this one.

I have a container of that in my freezer now too - I think I like how easy and fast it is to make - no fussy tempering!

Like I've said, I love this recipe. It's my go-to. Yours looks wonderful.

I've always made the Philly-style ice cream recipe that comes with the Cuisinart ice cream maker, I'll have to try the DL version; it sounds great! I think half a vanilla bean sounds like plenty for one batch of ice cream.

I loved this ice cream... so much easier than a custard based vanilla with amazing results!
Actually, everything I've tried from that book has been pretty amazing!

I've been dying to try this recipe and will have to do so with your tips. Thanks for the great info! :)