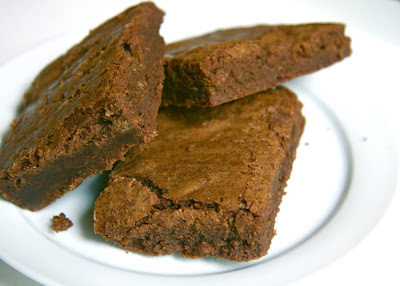 Back in April the Sweet Melissa Sundays group* made Brooklyn Brownout Cake; a devil's food cake filled and frosted with crumbled brownies. Although I probably could have used any type of brownie, I went ahead and baked a batch of the Sweet Melissa brownies to use for crumbles. I didn't need the whole pan so I ended up freezing the rest for a future rainy day. Or a future brownie taste test, as it turns out!

Our book group had a summer dinner party and the dessert was a brownie extravaganza (accompanied by vanilla and peach ice creams). We sampled and voted on 4 different brownie recipes. The interesting twist is that all of the brownies had spent time in my freezer!

I will be presenting the results of the taste test in a special post, but first I am blogging each brownie separately. Previous posts are: the Baked Brownie, and Dorie Greenspan's Tribute to Katharine Hepburn Brownies

- You can find the recipe on Megan's brownie blog (along with some other wonderful brownie recipes) Melissa says that this recipe is based on Julia Child's.

- Although the recipe is for a 9 x 9 pan, it uses a whopping 2 sticks of butter! I thought that the batter seemed really greasy, like it just couldn't incorporate all that butter.

- I left out the nuts, mostly because I was going to crumble them for the cake, but also because I prefer them that way.

- I used a dark silicone pan, so I reduced the temp somewhat. I baked the brownies at 335 degrees for 42 min.

- The brownies were lighter in color than the BAKED brownie or the Dorie Greenspan/Katharine Hepburn brownie, both of which used dark cocoa powder and coffee/espresso powder.

- The brownies were pretty flat and dense.

There are not a lot of bells and whistles with this brownie - it's a straight chocolate brownie. I found it very chewy, very chocolaty, very fudgy, and very buttery.

Although it is not my favorite brownie recipe by a long shot, this one received some top votes in the brownie taste test.

*I don't think I've ever mentioned here that I withdrew from the Sweet Melissa Sundays group because I found that I couldn't keep up with the requirements of two weekly baking groups. I really enjoyed the group and my fellow SMS-ers, though.
Posted by Nancy/n.o.e at 10:28 PM

Yeah, these weren't my favorite brownies either - they were just so-so. Not bad, but not thrilling either.

Thanks for the link to me!

I'm totally excited for the results of the brownie taste test! I made the Baked brownies when SMS made the brownout cake, so I haven't tried these yet. I am actually surprised I've managed to keep up with both groups; it's challenging to bake/blog both desserts and also to exercise enough to eat them.

Looks like there were a worthy contestant in the brownie extravaganza! Two sticks of butter for a 9" pan is pretty remarkable though, and since these weren't a favorite of yours, I might have to stick with some less butter-intensive recipes. Oh, but good call leaving out the nuts. These look great!

Wow, that is a lot of butter. Like everyone else, I can't wait to hear the final results of the taste test! =)

They look good. The Dorie KH ones are now my favorite go-to brownie!

Although I am still part of SMS, I haven't been baking on a regular basis and I'm thinking of dropping out. Like you, it's kinda tough to keep up with all of the baking, especially when it may be something I don't particularly want to bake.

I'm so looking forward to reading about the brownie smack down!! And holy cow!! That is a lot of butter for a 9x9 pan. They do look good, though.

Hmm... good to know they were a little greasy - 2 sticks of butter does sound excessive. Ah well, at least you're doing the search for the perfect brownie so I don't have to!

You must have a million brownie recipes...how do you decide which one is THE recipe? This look like something the guys around here could put away tons of, that's for sure.

Well they look gorgeous even if they weren't your favorite brownies. I did make these for that SMS recipe and now I can't remember how I felt about them! It is tricky to keep up with baking and blogging for both groups but I think the hardest part for me is finding outlets for all of the baked goods.