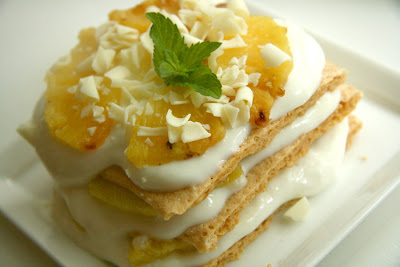 This week for TWD Andrea of Andrea in the Kitchen chose the Roasted Pineapple Dacquoise (pronounced dah-kwaz). This is one of the more dramatic-looking recipes in the book and it consists of a nut/coconut meringue which is layered with a white chocolate ganache and roasted fresh pineapple. Dorie finishes the “cake” by pressing toasted coconut on the sides.

I’m going to come right out and say it: The dacquoise was not a success in my kitchen. It was entirely user-error: a combination of not reading the recipe quite carefully enough and over beating the ganache at the very last step. As I tweeted at the time, "As far as baking experiences go, the dacquoise is somewhere between infuriating and heartbreaking”

It started out well enough. I had the perfect occasion to make the dacquoise. J.D.E. was home from college with her friend G who stayed for about a week's visit. When I learned that G loves tropical flavors (and that he used to have pineapples growing in his yard when he was young!) I knew that I had to bake the dacquoise for him! And because this is a wheat-free recipe I planned to split the recipe and make a small dacquoise for my good friend D, who is on a gluten-free diet (coconut is her favorite flavor!)

Things continued fairly well. I baked the dacquoise on a Saturday, G’s final full day at our house. It would be our dessert after dinner. At the same time I was baking bagels (you can read my bagel post on my bread blog, here) and making the Honey Peach Ice Cream (posted here). And a bunch of my baking-and-blogging friends were baking in their kitchens (most were making bagels too). We kept ourselves amused – and informed - by live-Tweeting our baking session.

Although this week’s P&Q post reveals that several of the TWD bakers found this an easy recipe, for my baking level it was plenty challenging. As the day progressed the elements were coming together, for the most part, although the dirty dish-count in my kitchen was staggeringly high. Spreading the meringue onto the squares I’d drawn was how I imagined troweling mortar on a brick would be. The pineapple was a bit tricky to roast, but it was browned and ready. 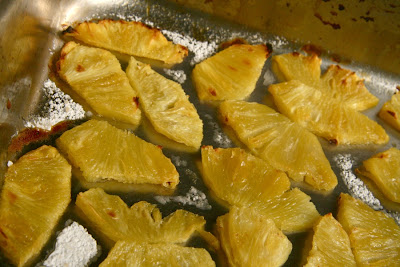 I didn't hit the shoals until the ganache. I don't like white chocolate but I thought that I'd buy the good stuff and give it another chance. Whole Foods had the Valrhona Ivoire that Dorie mentions and luckily it was in fevres (small oval pieces) so I didn't have to chop it up. One dacquoise-worth of the stuff cost $15 - gulp! Despite Dorie's admonition not to overbeat the cream + white chocolate, that's exactly what I did. Ugh. Rather than silky ganache I ended up with (very expensive) weepy white chocolate butter.

And who would have guessed that the ganache would have to chill for 3 hours and there was a 4-6 hour wait time after assembly of the dacquoise? Not me! (A more careful reading of the recipe would have eliminated the guesswork, though...) We ended up eating our dessert as a midnight snack. 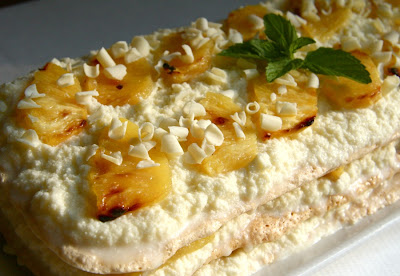 Maybe it's because we waited so long for the dessert to be finished, but the four of us scarfed our portions. At first we all thought it was good. Then we all realized how very sweet and rich it was. The pineapple was a welcome - and needed - counterpoint to the other elements. You definitely wouldn't want to skimp on the amount of pineapple. To me the white chocolate flavor was just too much for the dessert.

Luckily, G enjoyed the dacquoise more than the rest of us, and had some for brunch the next morning before leaving for the airport... and the final portion was tossed.

And what about that lovely creamy confection in the top picture, you ask? After ruining the ganache I couldn't give dacquoise to my friend D. The small meringues sat around my kitchen for awhile. Then for lunch one day I sweetened some nonfat Greek Yogurt with honey and layered it with the pineapple and meringue. Add a few white chocolate curls to the top. Delicious!!

Bagels and Dacquoise on the same day?! I'm impressed. This sounded like a complicated recipe, and rich, but good for you for giving it a try. Hope everyone helped with the dishes!

Sorry about the ganache. We thought it was all too sweet as well. I tossed out the last of it this morning. Love the idea of the meringue with yogurt and honey!

Oh dear, I'm sorry that your ganache rebelled and fell apart. I really liked this dessert but I agree that it was very sweet. I couldn't finish my portion of it (but Dudley finished it for me -- he loved it!). I'm glad that G liked it and had seconds. I think that it sounds even better with the sweetened Greek yogurt. That's an inspired result that came from the ganache mishap!

I think this would have happened to me even if I didn't have bagels and ice cream going on at the same time, which is why I skipped it. But good gosh Nancy, your dacquoise is gorgeous! I never would have known it wasn't a rousing success (well, I guess I would have because of Twitter). Serving the meringues and pineapple with Greek yogurt sounds wonderful, and so much healthier. I might give THAT version a try sometime.

I also ruined my ganache. But, unlike you, I destroyed mine and had to start over. Yours looks great even if you didn't love it!

Well, I have to say that there is a big difference between photo number one and the end photo. I could not quite figure out what you meant by beating the cream ganache too much, but I can see where it was a little bit further than what you would normally take it if you hadn't had a million distractions and been baking like a fool that weekend. LOL. It looks good enough in the end photo anyway, I would have eaten it as I loved all those flavors, but I did stop at the two bite portion as it was sweet and very satisfying with the two bites. Going for another round of two bites this evening. Fun baking with you and the whole time I was beating that ganache I kept my eye on it thinking, "Is this too much...is this too much...is this too much?" LOL.

You were quite busy! I hate when I don't read all the way through and realize that something has to sit. It looks great, though!

How cool! Love your save at the top. It looks gorgeous.

And thank you for the pronunciation guide. I was saying dacquoise completely wrong.

The top picture is gorgeous! I love the yogurt idea. I don't really like white chocolate; that was one of the reasons I didn't make this one. But I do want to try making dacquoise at some point (without the coconut).

Based on your photo, you could have completely lied to us and we would never have known it was a failure. I missed this week and have doubts as to whether I will get to this one anytime soon.

Well, for all the trouble it took, your cake turned out wonderful.

I think both versions look lovely, but I'm sorry you were disappointed in it. I was on the fence about it, so I skipped it. I'm glad G liked it, though!

I would have never guess that was yogurt. You could have pretended it was silky smooth ganache. Sorry you had such a bad time. There is nothing worse than messing up, especially when it is an expensive mistake. I loved this but I really like white chocolate. At least you made G happy.

Sorry your ganache didn't turn out.

Wow! It sure looks like it turned out beautifully to me! Yum!

Sorry about the ganache, it still looks really beautiful. I saw your comments on the P&Q section, so I used Greek yogurt for a layer of mine and nobody noticed it wasn't all ganache. It's nice that your house guest was happy!

It was good of you to tell us that you struggled...and I loved your confession at the end! This dessert wasn't my cup of tea, anyway, but I really should try it sometime to test my baking mettle! I'm pretty sure I'd love the roasted pineapple, if nothing else!

I've done the same thing - not reading the recipe completely. At least you gave it a try. Since I'm not a fan of meringue, I decided to pass on this one. Yours looks great!

Yep, I over beat my filling too. Yep, it was too sweet especially because I didn't use pineapple, but the even sweeter mango. Ugh.

WOW! This has to be the prettiest I've seen all day.

The colours are crips, the texture super inviting, and all around... it is perfect!

I do agree though... about the sweetness, and I'm glad for making only a quarter of the recipe. Anyhow... 14oz of white chocolate for a single recipe was way too much for me, and way too expensive.

I like both your confections. Yes, I think it was very sweet but the guys at work wolfed it down. Next time I would use less sugar.

sorry you didn't love this one--it looked pretty though!

Wow! You're more dedicated than I am. I just didn't/couldn't take the time to make this (and I don't care for white chocolate either). It DOES look great in that first photo.
You rock in the kitchen! ;)

You're killing me, Nancy! Your leftover at the top looks better than the dacquoise I sweated over for hours! I'm sorry the white chocolate ended up being an expensive science experiment. Love feves...but I am so lazy!

Both of your dacquoise look wonderful! The greek yogurt one looks really refreshing!

Many said it was really sweet, so your yogurt idea sounds perfect.

It looks amazing. Glad to know how to pronounce it.

sorry it wasn't a success but it does look quite lovely and dramatic!

Not big fans of "fake" white chocolate here either so my hat's off to you for springing for the big bucks. I guess sometimes it just makes it better. Its truly a beautiful presentation and I'm sure well worth the effort and the wait.! Great work as always.
AmyRuth

Nancy - it LOOKS like it's worth $15 a slice. Honestly... nice job! I started this and ended up with nothing remotely similar to the book's recipe. But I loved making the dacquoise - and found other 'cake' recipes that pipe round disks to use as crunchy "layers" between the cake layers. So it was worth trying something new. Funny, isn't is how some people are not fans of white chocolate. I can take it or leave it - and like you, would freak is I botched something using precious V. chocolate. Your pineapple looked fantastic - and I'm sure everyone enjoyed the dessert - and appreciated the time and effort that you put into it. It truly looks wonderful!

I like your second version - very close to what I did! But kudos for forging on after all of the heartbreaks!

so, I read your post again and you Tweet. Please tell me how I do that with other TWDers. I am a twitter member.... but cannot figure out how to find y'all.

I can't believe it's taken me the entire week to get over and comment on your dacquoise! I'm sorry it didn't work out for you. On the plus side, the rest of us on Twitter who waited until the last minute benefited from your advice :) It still looks terrific!