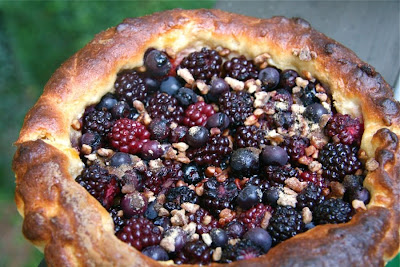 A recipe from Dorie Greenspan's book Baking From My Home to Yours was my very first successful experiment with yeast. The thrill of watching the dough rise and the smell of it baking have had me hooked ever since; now I bake yeasted bread a couple of times a week and have started a special bread blog to chronicle my adventures. So I was excited this week that Denise of Chez Us chose the Brioche Plum Tart for this week's Tuesdays With Dorie assignment. I couldn't wait to bake another Dorie yeast recipe!
Dorie's tart has a sweetened lean brioche as its crust. Brioche is a lovely bread in its own right and makes a versatile base for many other recipes, such as sweet rolls and coffeecakes. Depending on the amount of butter in the brioche, it can be classified anywhere from "rich" to "lean" (which still is pretty rich, actually!) I recently baked a medium-rich Brioche for the Bread Baker's Apprentice Challenge (you can read about that bread in this post) and I was very interested in working with a leaner brioche dough. 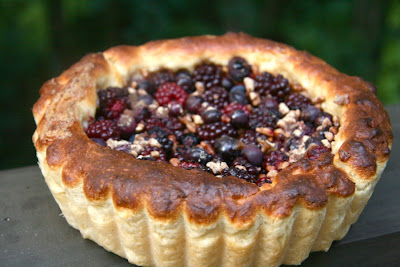 - Zoë François of the book (Artisan Bread in 5 Minutes a Day) wrote this post about mini brioche tarts.

- You can find the recipe for Brioche Plum Tart on Denise's blog post. She also has a wonderful picture of how the tart can/should look.

- My husband chose berries over plums for the tart (which was great since I don't have plum jam). I used blueberries and blackberries. A 3-citrus marmalade seemed like a perfect complement to the sweetness of the berries.

- I made 3/4 recipe to fit my 7 3/4 " tart pan with deep fluted sides. My buddy the online circle calculator told me that was an appropriate pan size for the scaled amount of dough.

- I converted to instant yeast , which I mixed in with the dry ingredients.

- When I'm not mixing ingredients by hand, the food processor is my next favorite way to mix yeast dough, especially since my stand mixer is ailing. I pulsed the dry ingredients first (with the instant yeast), then added the wet gradually while the processor is running. The food processor mixes dough very quickly, and usually generates a fair amount of heat, so it's a good idea to use milk and eggs at refrigerator temperature. The brioche dough is very sticky, so the food processor wasn't able to mix it quite as long as I would have liked. The dough windowpaned (could be stretched until translucent) so I knew the gluten was well developed.

- I wasn't able to give my dough an overnight rest, but I might try that next time, as Dorie says it gives extra flavor.

- The recipe doesn't specify a weight of fruit to use. It was hard for me to figure out how much the crust would rise or puff, and how many berries to use in that deep pan. 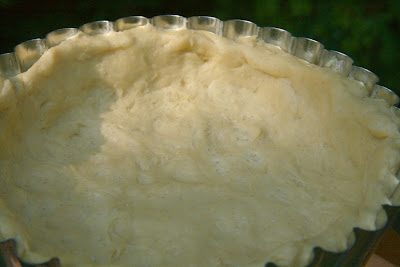 - For the topping, I sprinkled pecans and golden baker's sugar.

- The brioche puffed beautifully in the oven, mostly on the sides of the tart, and browned very quickly; I wish I'd tented it a tiny bit sooner. The berries got quite juicy as they baked.

- I wonder if the brioche bottom might have puffed more in and among the pieces of fruit had I used plums instead of berries.

- I served the tart warm with vanilla ice cream. Even though Dorie recommends that the tart be eaten the day it is baked, we ate the remainder reheated the next day and it was still good (if a bit soggier). 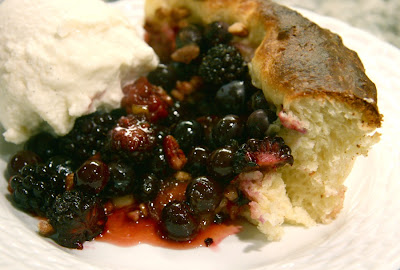 It had a great play of tart and bitter (marmalade), bright and fresh (berries), soft and rich (brioche), sweet and crunchy (nut mixture), all mellowed out by the creamy coolness of the freshly churned vanilla ice cream.

This tart was a huge hit with my husband, who said that he liked it better than pie, which is truly saying something. I love the lightness and slightly sweet flavor of Dorie's lean brioche, and would love to experiment with this recipe again. I think I'd use a shallow tart pan next time to see if I can get the bottom of the crust to puff up.

Stop by here again tomorrow as my blog celebrates not one, but two big milestones! 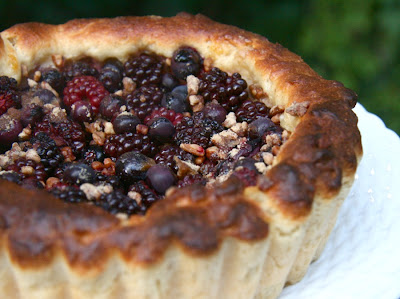 Update: I'm submitting this bread-tart to Bread Baking Day #21, hosted by Stefanie of the blog Hefe und Mehr. The theme this month is "sweet breads", and I think this sweetened brioche tart fits right in!
Posted by Nancy/n.o.e at 10:52 AM

Your brioche looks gorgeous with all those berries. And the layer of marmalade sounds like a perfect counterpoint. It would be fun to do a side-by-side taste test of a brioche dough that sat overnight vs. one that didn't.

This is so great! It's the first real success I've seen! I'm completely and totally in awe, as always.

Mmmmm... beautiful! Very rustic looking and your mixed berries add a definite plus to the whole thing!

Seems I'm the only one in thise world who can't bake!!! Didn't take a change knwhing my passed yeast baking failures, I made last year's galette. LOL

Bravo to you, for you great knowledge of baked goods... (I'm jealous, really!)

Your tart is stunning. Great job! I love the flavors you went with.

Beautiful. It sounds and looks delicious.

Your tart looks outstanding. I love how it darkened around the top edges.

This looks amazing! I think the trick to not getting a squished soggy middle is to bake without fruit and then serve with fruit.

Oh WOW Nancy, those berries are gorgeous in that brioche! That is so stunning! It really looks like something you'd get in a restaurant.

oooh, these look delicious! i'm going to have to try these with some blueberries from the family farm:)

Gorgeous! I love that you used berries. I can't believe you don't have plum jam in your big jam collection. :P

What a great idea to use berries! They do throw off a lot of juice so maybe add a tiny bit of potato starch next time? I bet the berries and marmalade were a great flavor profile...I can almost taste it!

Thanks for all the great links in this post! I've learned so much from following just a few of them. Great to see your other blog. I would never have found it.
Glad you enjoyed the tart!

I really enjoyed this brioche dough and see the possibilities for other delish pastries.

I loved your presentation, and the flavor combo with the berries and citrus sounds so yummy.

Your tart looks really beautiful, Nancy, and I'm so glad it was a huge hit with your hubs! Mine didn't puff much on the bottom even though I used plums, but then again it didn't bake much on the bottom, come to think of it. Oh, love your obligatory deck rail shot - I take those too! Are you always afraid it's going to fall off? I am.

I love the look of those berries. Yum. We liked the plums, but my brioche turned out a bit dry. Great job on yours, as always.

You don't have plum jam over there in that huge stash of jellies and jams??? Are you sure?? LOL. Your tart looks so great with all those berries in it. And, my bread browned like yours and I tented after ten minutes b/c you warned me about that...it still browned too much for my whimpy tastes.

How beautiful, and marmalade with the berries sounds like a great match. I wished I had covered my tart with foil sooner as well. I caught it just barely before it was truly burned.

Nancy - what a beautiful tart! It looks straight out of a magazine... and I love the high-sided tart pan thingy! I did two - one in a standard 7inch tart pan and one in a pan that I *think* is called a brioche pan. High-sided and fluted. Anyway - I piled it with fruit and it got kind of heavy and soggy... the reg. tart turned out great. But yes, the brioche bug has bit me! It was SO easy to make and so delicious. I hope you and your famly enjoyed yours!

Great looking tart. After looking at some of these, I'm wishing I could have found the time to make it. And I know I'll try it sometime, especially if you're saying it's a "lighter" brioche! ;) The berries look great.

Looks fantastic, especially the picture of the oozy berries with ice cream! Thanks for the link to the online circle calculator, very useful for us bakers with limited pantry space. I'm late this week and impatiently waiting to put mine in the oven.

Oh my goodness, this looks divine!! All those gorgeous berries :)
I was a little nervous with this but i thought it came out really well.

Your tart is just beautiful! I love the look of all of the berries, and the berry/marmalade combo sounds delicious!

I used a fairly shallow tart pan, and the bottom of mine didn't puff up too much, either. I used peaches.

I wish I had tented mine sooner, too - I was really surprised at how quickly it browned...

Oh wow, Nancy, your tart looks so delicious! Great photos too. The berries are such a gorgeous color. I love that your brioche dough behaved. Mine sort of went crazy when it was in the oven and overtook the nutella and raspberries I used in the center. It was tasty, but not my favorite Dorie recipe.

Anxious to see what your two milestones are.

What a fabulous post -- and a gorgeous brioche! I'm delighted that you were happy with it.

I love the brioche you made, it looks so pretty. And everything is better with a big ol' scoop of ice cream. Wonderful!

Wow, your Brioche 3-Citrus-2-Berry Tart looks so Beautiful! I love all the colors and how pretty the brioche looks with the fluted sides.
The beau said he would prefer it with a pie dough instead of the brioche - I think it's because I over baked the brioche! I'll have to try it again for sure!

I've never seen tart pans like those. Would they be used for savory pies or something? Seems like the right thickness.

What a amzing looking tart! And with some Icecram it must be heaven on earth!

I just saw your brioche tart in the BBD #22 roundup, and what a stunning take on Dorie's recipe! Love the use of berries and triple citrus marmalade in lieu of the plums and plum jam! Your tart looks like it came straight out of a cookbook or magazine! Great job!

Boy, does this look yummy! I haven't made a Brioche, so it's about time I tried one. Putting in the different berries sounds great!