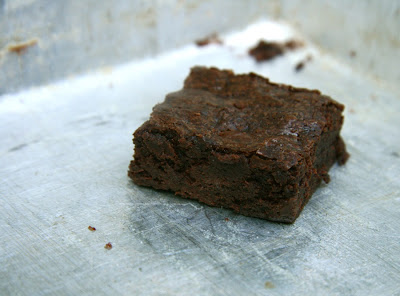 I was excited to make this week's Tuesdays With Dorie assignment, the Tribute-to-Katharine-Hepburn Brownies. Our book group's (4 couples slowly working our way through Dante's Divine Comedy at the moment) summer dinner was in the works and my plan was to have a brownie taste test as the dessert. The group had flipped over the "Baked" Brownies that I made back in February, and I wanted to stack those up against some other fudgy brownie varieties. I was just deciding which recipes to use in the taste-off when the TWD July recipes were announced - I could easily add Dorie's KH recipe to the brownie lineup.

We held the taste test on July 3, with 7 testers from my book group. My husband, the 8th member, is allergic to chocolate, but I had some blondies also. And vanilla ice cream, his favorite (both of which I will post soon.) I will blog each brownie in its own post in coming weeks and then devote a special post to the taste-test. But I will include my testers' salient comments about Dorie's brownies below.

- This was an easy recipe and generated few dirty dishes: a bowl, two pans, a few measuring cups and spoons. If the recipe were written with weight measurements along with volume, it would require even fewer dishes. Love my digital scale!

- I've always been leery of combining cinnamon with chocolate, but I loved last month's Cinnamon Cake, and my favorite chocolate chip cookies have a touch of cinnamon (barely discernable to me, but adds to the deliciousness), so I used just a touch, 1/4 tsp.

- The recipe uses a TON of butter - a whole stick in a small pan of brownies - and not much flour. The butter was really hard to incorporate; the batter was pretty greasy and the brownies were greasy coming out of the pan.

- It's interesting how brownie instructions differ: Dorie says don't beat too much because you don't want to aerate the dough.

- I'm so excited that I recently acquired two 8" square metal pans from my mom. They are the ones that she baked in when I was little, and they are well-used and perfect. I've always disliked my Pyrex 8" and am happy to have an alternative. I made a parchment "sling", lining the bottom and running it up the sides to use as handles to pull out brownies.

- My brownies baked at 320 for 35 minutes. I used King Arthur divot test and it worked perfectly for these brownies. I used to have a devil of a time with brownie doneness, and this test has saved brownie-baking for me!

- I cooled the brownies on a rack for 30 minutes then refrigerated them until chilled and cut them. I left one out to taste immediately and froze the rest (this was part of the taste test; all of the brownies had been in the freezer). 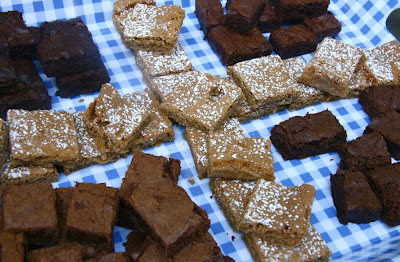 Here's a sneak peek at the taste test setup! The KH brownies are in the top left corner, the Baked one in the bottom right. See the divot in the center blondie?

The brownie top was nice and crackly, and the inside moist and dense. The edge piece was good and chewy, towards the center it was nice and fudgy. I thought that the hint of cinnamon and the coffee gave these brownies a complex and dusky flavor. In true Dorie style, the chunks of chocolate added to the intensity of the chocolate too. The brownies were a bit greasy so I think I'd reduce the butter by at least 1 T.

Without giving away the taste-test results, I can say that these brownies were generally well-received by the group. One of my testers, AT, referred to these as the brownies "with all the cinnamon." so I'm glad I'd cut the amount. Her husband did not like the coffee flavor in the brownies. I think it was more noticeable in these than in other chocolate desserts that have it. Another tester, SF, noted "Lots o Butter" about Dorie's recipe.

I've got to thank Lisa of Surviving Oz for selecting this recipe for us to bake this week. The choice couldn't have come at a better time! Lisa will be posting the recipe (update: this is the first time Lisa made brownies from scratch and she did an amazing job), so if you don't have Dorie Greenspan's book, Baking From My Home to Yours you can find the recipe there. But really, do yourself a favor and buy the book!
Posted by Nancy/n.o.e at 12:20 AM

They look wonderful--can't wait to see the final brownie taste-test results. (And thanks for the divot test idea--I always seem to underbake so that is helpful!)

I'm sure it was the pan that "made" them! I feel the same way about using my mom's "Wonderlier" Tupperware bowls from the 50's. Things like that make the kitchen more of a special place. Glad they were such a hit! Bound to have some folks like the cinnamon/dislike the coffee - vice versa. But that's what makes them better than a regular chocolate brownie. Nicely don Nancy!

I used one tbsp less butter after reading the P&Q and used 1/3 cup flour instead of 1/4 cup, mine were not greasy at all. LOved these!!

I love seeing the taste-testing set up. =) I left the cinnamon out of these, and had to use espresso powder in place of the coffee. I liked the added bit of intensity from the espresso. These were good brownies, but not my favorite. Looking forward to seeing the rest of the brownies and the results!

I'm looking forward to reading about the whole taste test. You went to a lot of work to set this up. I'll bet Kate comes out on top!

I always love that you have comparisons on your blog! While these are good, they just aren't my favs when it comes to brownies. I think these have too much butter in them.

A brownie taste off? How fun! These were a big hit here. I'm going to have to try the divot test and the Baked brownies.

I want to know the winner! I adore brownies. I am a fudgy girl:) I will have to try these for fun!

What a fun taste-test! I LOVED the KH brownies. I made them four times this week--with different mix-ins. I left out the cinnamon and coffee everytime, but I thought these brownies were great. Perfectly fudgy every time. I thought they were super simple, too. This may be my newest simple go-to brownie.

BROWNIE HEAVEN!!!!! They all look SO GOOD! I can't wait to see the posts for each and every brownie!

I would so love to be part of that taste test! :)

I didn't think the cinnamon was all that overpowering - but then, I love cinnamon with chocolate (and chili pepper too - but didn't want to go THERE!). They look wonderful!

The Divine Comedy! You're part of an ambitious book group! Your brownies look great - I'm anxious to hear how the taste-test turned out!

These sound delicious! And brownie taste-testing - what a heavenly treat to be included in that. Can't wait to hear the results.

How fun to do a brownie taste-test! I loved these brownies and am excited to read about the others you made.

I can't wait to read the results of the taste-test.

Wow. I wish I was one of your tasters. They all look delicious.

A book club and a platter of brownies, sounds like a wonderful evening!

OMW the saga of the brownies, can't wait for the installments on that...this whole process has been very fun baking with you all. I thought I knew brownies until I tweeted with all of you on the subject. Yours all look terrific. I have no idea how you got yours with that texture in baking the amount of time you did. It took me almost twice as long to get the papery crust on top. Yours are beautiful!

A brownie taste-off? And I wasn't invited?

I CANNOT WAIT to read the final results of your taste test! This is just so much fun, and the suspense is about to kill me. Glad that these were generally well-received. I omitted the cinnamon and reduced the amount of coffee. I loved the fudginess of these, but not the rawness, so I need to work on baking times. Yours look fabulous (actually, your whole taste-test table does!)

Can't wait for the results post. I agree that you could definitely discern the coffee in these whereas that is not always possible in other chocolate desserts. But we loved them and our pan was gone inside 24 hours.

Wow! Tribute Kate would love your Brownies! They look so Delicious:)

Thanks for sharing your recipe:)


Welcome~~~
http://foodcreate.com
Join , post your commments!
and if you can visit me I can visit you:)

Have a wonderful Day:)

I was just wondering about taste test protocol...does one eat a blondie as a palate cleanser? :) or does the taste test proctor have to stand nearby and say 'please don't eat the divider'
a lot? This seems like an exam you just can't fail...but I'll look forward to hearing more of about it!

That's great that you got your mom's pans. I have a measuring cup that I grew up with and I just love it.

I can't wait for your brownie posts and the results of the taste test!!

I love that you had a taste test. I eliminated the cinnamon - like you, I usually don't like it in my chocolate. Freezing these guys helped a lot with the fragile texture.

All hail the parchment sling! I loved these and look forward to your full taste test results.

All the brownies look great. I can't wait for you blondies recipe :)

I look forward the results of your taste-off, they all look so good! I love the Baked brownies, I think they would win at my house. I thought of your taste-offs last weekend as I made two different cheesecakes

That's a perfect brownie! I always enjoy reading your blog - it's very informative and you give excellent baking advice.

Another great post, Nancy. I didn't know what the divot test was and I saw you talking about it on Twitter. Thanks for putting up that link! Can't wait to see how the taste test went down!

I can't wait for your comparison post! Maybe it will help me choose a recipe. I've never made brownies before!!

All your brownies look really good!

Oh wow, look at all of those brownies!! I can't wait to hear about the results of the taste test! These brownies were a bit too fudgy and rich for me but yours look like they turned out perfect!

Brownie taste test. Brilliant. Sorry you live too far away to join your book club. sounds like fun.

All those brownies look lovely.

Man, I LOVED these brownies. I'm always on a never-ending quest to find the perfect brownie recipe, and I may have found it in this one!

I like how Dorie forces me to try stuff I normally wouldn't. I love cinnamon in chocolate, but I hate coffee and have never used it in anything before Dorie. Now, I think it makes the chocolate even better.

Your comparison pictures look wonderful!, and your reading group is lucky to have you! I would invent some sort of group activity if I knew someone would reward us so well. :)