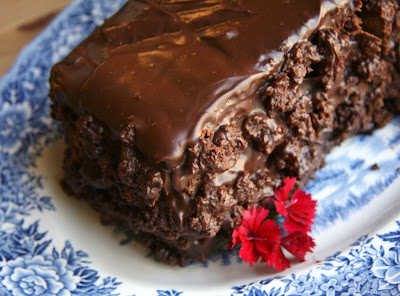 This week's assignment for Sweet Melissa Sundays is the Brooklyn Brownout Cake; the recipe is a nod to the legendary Brooklyn Blackout Cake, made famous by Ebinger's bakeries, the last of which closed in 1972. The original version was a 3 layer chocolate cake, filled and iced with chocolate pudding and coated with crumbled cake (from a reserved layer). Over the years, people have tried to re-create the secret recipe, and the cake has inspired many spinoffs. So, I've made Dorie Greenspan's Devil's Food Whiteout Cake (with a fluffy marshmallow frosting and crumbled cake crumbs on the outside) and now Melissa's Brooklyn Brownout cake (with a chocolate ganache and crumbled brownies). I've yet to make the original! For a little history and a recipe for Brooklyn Blackout cake, click here. 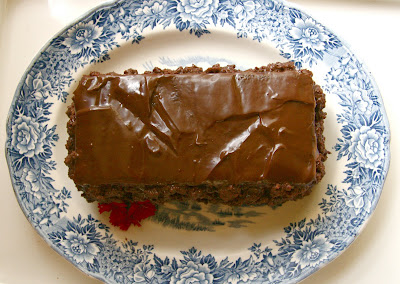 - The cake is not particularly difficult, but it requires three different elements, and assembly is a bit time-consuming. The separate recipes are for brownies (a few of which are crumbled for filling the cake and coating the outside), cake (for the layers) and ganache (for frosting, and for crumble "glue")

- The first step was making Melissa's Chocolate Brownie recipe. The brownies will be the subject of a future post, but suffice it to say that they are very fudgey - and good! Most of them are now residing in the freezer.

- I had every intention of following the cake recipe to a "T". And I was doing pretty well. The only change was to substitute the 1/2 c sour cream with 1/4 c light sour cream and 1/4 c Greek yogurt (because that's what I had).

- I brewed up a big insulated coffee mug full of hot coffee, which I set aside to keep hot while I mixed the rest of the ingredients, planning to measure out 3/4 c's worth of it when I was ready to add the coffee - which was the last step in the cake batter. No doubt you can guess what happened next. Of course I just added the coffee to the batter, forgetting to measure. I figured I'd added about an extra 1/4 cup of coffee. Now what to do? I added 1/8 c. of egg substitute (equiv of 1/2 egg), hoping that would help the very liquid-y batter to set as it baked.

- I don't have the 7" cake pans the recipe specifies, so I went a different direction. I decided to use some vintage loaf pans - they are 3.5" x 7.25" (about 3/4 of a standard 4.5" x 8" loaf pan and 1/2 a 9" x 5" pan - I often use them for making a half recipe of quick breads). The batter weighed in at 1200 g, so I put 400 g in each of the two loaf pans. The remaining third of the batter got divided among 6 muffin molds (about 65 grams each). My original plan was to use some of the extra muffins to do a taste test with the devil's food cake from Dorie's Whiteout cake - I still had some of it in the freezer. But now that I messed up this recipe, a taste test wouldn't be valid. 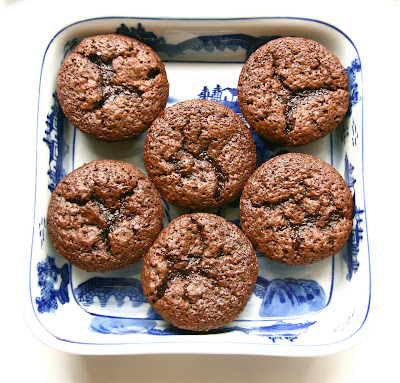 - The cakes and cupcakes rose nicely. The cupcakes were done in 33 min and the loafs in 40 minutes. 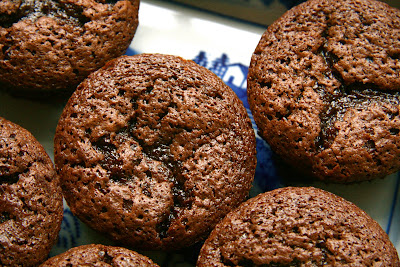 - I froze the cupcakes for later, and split the loafs into 2 layers each. I used 3 of the layers for the cake, and froze one layer for later.

- For the ganache I used half Ghiradelli semisweet pieces (58%) - on the left, below - and half Scharffen Berger semisweet baking pieces (62%) - on the right, below. The best part? I didn't need to chop the chocolate! 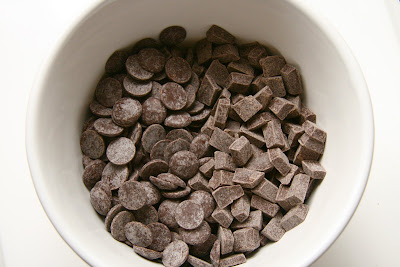 - Now for the assembly. This is where Melissa lets us down. There's clearly an error in the recipe, as the directions abruptly end about half way through assembling the cake. This was frustrating, especially as there's no picture to see what we're aiming for. A quick Google search didn't turn up many pictures of the cake, either. Oh, well, after all the Sweet Melissa Sundays bakers post there will be lots of images of this cake on the internet! 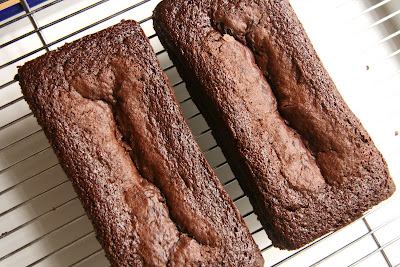 - So, here's what I did: For the crumbles, I used only brownie crumbs. My cakes cratered rather than domed, so I didn't have anything to trim off. I could have used my extra layer and crumbled it, but decided to just crumble the brownies. Melissa instructions say to crumble the brownies into 3/4 in - 1 in pieces. That would have been really huge crumbles! I made mine mostly about 1/2 inch. The crumbles got mixed with just enough of the ganache to coat them.

- Between the 3 cake layers I used the crumbles as filling. 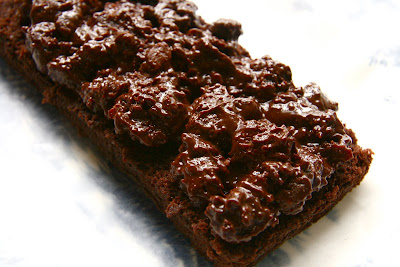 - Next I spread a layer of ganache over the whole cake, although I didn't take a ton of time to make it smooth and beautiful. I pressed the brownie crumbles on the sides with my fingers.

- I ended up using just over half the ganache and 4 brownies to fill and frost the cake (which in turn used just over half of the devil's food layer recipe). I get to save the extra ganache.

- I let the finished cake set up for several hours in the fridge. When I cut slices, they were veritable slabs of fudginess. In fact, the cake broke my Publix plastic cake cutter in half! 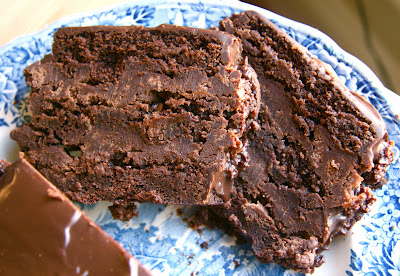 This cake is chocolate overload! It is dense, rich, and intensely chocolate. A little bit goes a loooong way, and you'd be well advised to have a tall glass of milk handy.

My husband commented: "This looks so good it makes me wish I weren't allergic to chocolate."

Elyse of Confectionary Creations chose this recipe, and you can find it on her cake post. Stop by Sweet Melissa Sundays and click on each of the bakers to see how all the different cakes turned out.
Posted by Nancy/n.o.e at 6:30 PM

Great post! I was disappointed by the lack of instructions as well. Those muffins look phenomenal. I really enjoyed this cake though a few bites is definitely enough because, like you said, it's so rich and chocolaty!

Wow, that's some really chocolatey-looking cake! I look forward to hearing more about the brownie recipe.

Love how your cake and cupcakes came out! I really wished there were some type of pictures for this recipe especially since this was a tad confusing to me at times.

I love your scientific studies of the challenges!
The dense fudginess of yours is oh-so-appealing to me. Yum!

I love, love, love the rectangle shape of your cake, it looks so pretty and sophisticated. I saved some brownies in the freezer and I took them out the minute I walked in the door this evening. I can't wait to try them tomorrow! I second your sentiments on Lent, too. It's very meaningful but I'm ready to bake and eat again!

This looks absolutely incredible. I usually think a little extra coffee is a good thing; I might have dumped the whole pot in there on purpose. This looks so great that I am tempted to try it ASAP, even though TWD is burying us in chocolate this month and I am the only one in the house who would eat it. Glad you are back in the sweet-eating action. Hope you and your family had a happy Easter!

I forgot to measure my coffee too! I added extra flour to compensate. Your cakes look beautiful!

What a great post, thanks for the history about the brownout cake origins. I am impressed with your measuring/multiplying/dividing skills, I am really math challenged so I tend not to feel comfortable changing pan sizes.

Mmm, yours turned out fabulously!! I love your husband's comment. I wish he weren't allergic to chocolate, too. This cake is totally chocolate overload. My grandma has been pining over the Ebbinger's chocolate cake for years now, and while I don't think this one necessarily captures the essence completely, it sure captures the ultra-chocolatiness! So good. Great job!

It's always interesting to see everyone's interpretation of the same recipe - even just the pictures. Yours looks to decadently delicious it would be hard to resist!

Your husband's allergic to chocolate? Oh no. I didn't know the history/ancestry of this cake (and the Devil's Food Whiteout Cake). Very interesting. I'll have to go find a recipe for the original. Your loaf and muffin cakes look wonderful.

Your cake really does look super fudgy! Reading your post made me wish I had some of my cake left. Sadly, I ate it all already!

Love the loaf idea, all cakes are better in loaf form.

I like your idea of baking the cake in a loaf pan. Great job!

If it is so chocolatey - a little goes a long way - which is good in my family gatherings - which number 30-45. Yours looks so very pretty. I worry - I might eat the brownies before I incorporated them.

Nancy, great looking cake! I'm going to join SMS, the book is on its way. Thanks for a wonderful post.

Chocolate overload is exactly right! Your post looks super, I wish I had the time to post a long one.

Wow, My! How delicious this cake looks! The consistence looks amazing!