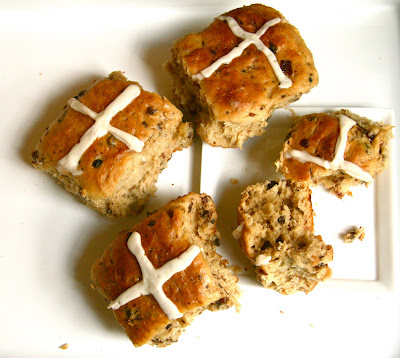 What does a new yeast-enthusiast who has avoided sweets all Lent do when Easter is fast approaching? Make Hot Cross Buns, that's what! These buns are a rich Easter bread using all the luxurious ingredients that were traditionally not eaten during the fasting period of Lent. Hot Cross Buns are a centuries old tradition in England, but their roots go back into the murky depths of legend. (In researching bun recipes, I came across lots of information, including this interesting blog post.) I'd read that Hot Cross Buns are traditionally baked on Good Friday so I determined to do the same.

I chose a recipe from King Arthur called Easy Hot Cross Buns (click here for the recipe, and here for King Arthur's illustrated step by step post). I'd seen this recipe back in February, and the images were embedded in my mind. Nice rounded buns, stuffed with dried fruit and piped with a glossy icing cross.

My initial plan was to start on Friday right after lunch, which I figured would give me time to photograph the fresh buns in some natural light. But S-Dog was sick, and I spent all afternoon at the vet with him. By the time I got to the buns, the day was waning, and so I was stuck taking a bunch of indoor available light photos of the buns hot out of the oven.

I'm skipping over half a dozen yeast experiments to post this on in time for Easter, but I've made lots of wonderful bread and some beautiful rolls which I'll eventually post. Bolstered by recent yeasty success, I was hopeful/ confident that I'd end up with buns of beauty... 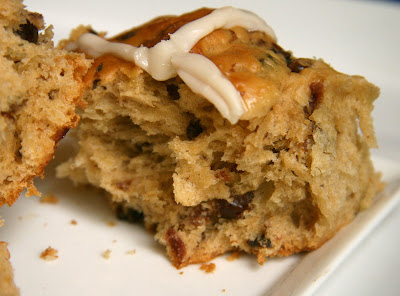 - This was my first time using SAF Gold yeast, which is supposed to be better/faster for rich dough.

- I reduced the cinnamon to 3/4 tsp, and used 1/4 tsp each of freshly ground cloves, allspice, and nutmeg.

- I mixed the dough in the food processor: first whirled the dry ingredients, then added butter, then eggs, one at a time, then (2%) milk slowly. At this point, the gluten was already pretty well developed.

- I'd read somewhere that for softer buns, you can add a bit of extra liquid then wait a half hour or so to knead the dough. That sounded really cool, so I tried it, with an extra tablespoon of milk and then let the dough rest 20 minutes. Then I kneaded the dough further in the food processor until it passed the windowpane test (the dough stretched and became translucent). 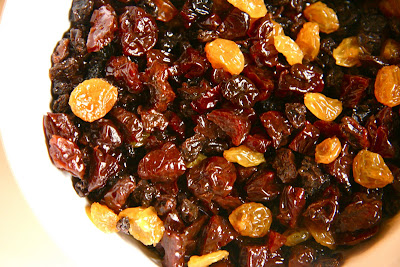 - The dough was very, very sticky. VERY sticky. I think I should have kneaded in some flour. (And I shouldn't have added the extra milk)

- The dough rose very well: after one hour, it was nearly doubled, and still excessively sticky. I forged ahead, using a muffin scoop to measure out 3 3/4 oz portions, and ended up with 12 buns. They did not resemble the perfect rounded buns in the King Arthur picture. I tried smoothing the tops with oiled fingers, which was largely unsuccessful. 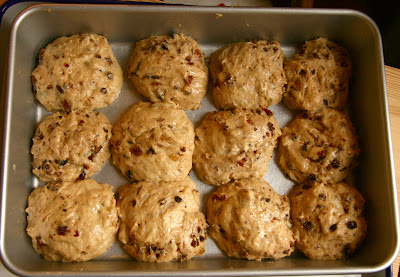 - After proofing the buns for another hour I popped the pan into the oven. I used Peter Reinhart's steam method - pouring hot water into a metal pan in the oven for the first 5 minutes of baking.

- They baked for close to 25 minutes until just over 200 degrees on an instant read thermometer. The buns rose a good bit and ran together into one big mass; a far cry from the perfect rounded buns I'd envisioned. 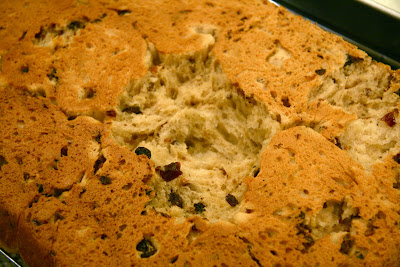 - Although I tried to loosen them, one bun stuck to the bottom of the pan when I turned them out.

- A half recipe is fine for the icing, if you use a small plastic sandwich bag (with the corner snipped) to pipe the crosses. 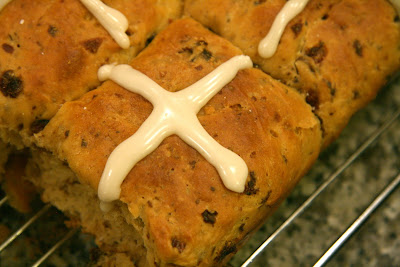 I tasted a bit of the scrap from the warm pan. It was soft and tender and gently spiced. The smell was so tantalizing that my husband begged for one to have with his after dinner coffee. I let them cool for 20 -30 minutes and pulled one off for him. The crumb was moist and shreddy and tender. He loved it! I've frozen the rest to have for Easter breakfast - can't wait for a lovely sweet whole bun to enjoy after the Lenten fasting. 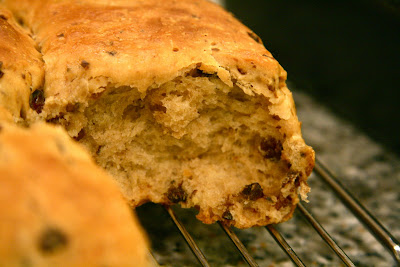 These were not the perfectly formed round pillows of my imagination. But, if taste truly reigns supreme, then these hot cross buns are king! 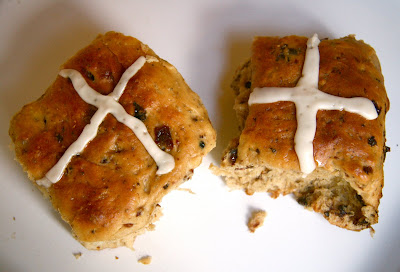 my icing developed a pox overnight!

Dear Nancy, ciao ! You know I can't believe it: I'm making hot cross buns right now !(I'm in a crazy 'Starter not trowing'/baking frenzy and I made more colombas, another tipical easter bread from Civitavecchia, a whole wheat seed bread, croissants au levain and as Carlo learned in English class a poem and the story of hot cross buns and asked for them... and I found a recipe using starter...
writing I realized I'm just crazy...!

I looked up at the ceiling lamp to see if it moves again but apparently it is still. I'm sorry for being so long I wish you a very wonderful breakfast (literally) tomorrow morning. Happy Easter !

They do look tasty!
I have made hot cross buns a couple of times, both the round ones and the tray ones. I find the round ones are that way because they are baked separate from each other on a flat pan, like buns, rather than in a lasagne type pan.
Hope this helps in your quest for round buns!

Ooh, I made these too! (Well, not these, but hot cross buns.) Yours look wonderful...I'm so glad you're going to have such a perfect Easter morning treat. Stickiness must be a common factor in hcb dough...I made mine in the mixer and sticky they were!
Happy Easter, Nancy!
Audrey

They look so tender soft and delicious! Enjoy!!

Ooooh, I've been seeing these all over the place lately. Yours look lovely! Glad you enjoyed them.

What beautiful hot cross buns! I got some from the farmer's market yesterday but I'm sure that yours will be even better this morning! They always remind me of the nursery rhyme that my mom used to read me when I was little.

These do sound so good. I attempted to make some one year, and made about 4 different versions, none of which tasted like the ones I grew up with.

Those look great, even if they didn't turn out quite the way you wanted them too. I've never made hot cross buns, but they sound good. =)

That's quite a journey. They look amazing. Glad you can start eating sweets again!

I've never made hot cross buns before (shocking, I know) but hope by next Easter I'm ready to brave them. Yours look fabulous! I don't think yours suffer at all from not being perfectly formed round pillows. They look irresistible as is. Definitely the perfect Easter breakfast.

Reading your blog has given ME a newfound interest in yeast. Your hot cross buns look absolutely fabulous! What a great job you've done.

Wow! I didn't realize Hot Cross Buns were so tricky. My mother wanted me to try making them this year and I ended up not having time. Your buns look great, especially that last picture. You can't tell you had problems with stickiness and shapes.