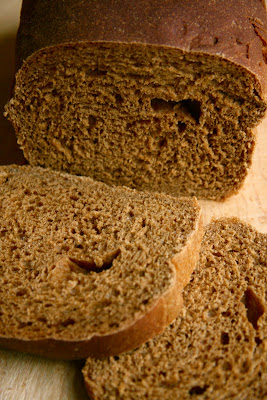 Hay Day (a wonderful farm market that used to be in Westport, Connecticut) sold a very popular bread, and featured the recipe in both of their cookbooks. It is called Whole-Meal Bread, and indeed it does have a decent percentage of whole grain flour. But what really appealed to me was the two types of molasses in the ingredient list. I love it when I get to use blackstrap molasses, a strongly flavored cane syrup that is rich in iron.

- I kneaded in a good deal of bench flour - maybe a cup? - because the dough was pretty sticky.

- The dough doubled in about 1 1/2 hours in a warm spot of my kitchen.

- I shaped it and placed it in a pyrex loaf pan, in cooler part of the kitchen to proof. I left house for 1 1/2 hrs, since this rise was supposed to take 2 to 2 1/2 hours. When I came back it was fully risen, in fact it had more than doubled. I quickly preheated the oven and popped it in.

- The loaf baked for around 40 minutes, until it registered 190 degrees on an instant read thermometer. The bread stuck to the pan a bit. I think I'd dust the pan with cornmeal after oiling it, to help with the release.

- My bread had a hole in the middle. I've since learned a lot more about loaf formation (this loaf was about a month ago) ... among other things!

This big mahogany-colored loaf was light and soft and moist, but at the same time a bit chewy, with a great molasses flavor and a little hint of whole grain goodness. It's not at all like a quick bread, there's just a hint of sweetness from the 1/4 cup of molasses. Because of the molasses/whole wheat combination, the flavor (but not the texture) is faintly reminiscent of Boston Brown bread. This bread could do equally well paired with savory elements in a nice sandwich as it does toasted with butter and jam.

1. Whisk together the whole wheat flour and 1 3/4 cup of the all purpose flour and yeast.

2. Combine milk, water, oil, both molasses and salt in a saucepan. Place over medium heat and stir until ingredients are melted and combined then remove from heat and pour into mixing bowl.

3. Gradually stir the flour mixture into the liquid, to make a stiff dough that easily pulls away from the sides of the bowl. Add more all-purpose flour, if necessary.

4. Turn dough out on a lightly floured surface and knead until it is smooth and elastic, about 10 minutes. Place in an oiled bowl, turning to coat the dough. Cover with a kitchen towel and set in warm spot until doubled in volume, 1.5 - 2 hours.

6. Turn the dough out of the bowl and shape into loaf. Place into the pan, cover loosely with a towel, and allow to rise again until doubled, 2 - 2.5 hours.

8. Bake loaf until risen and brown, and sound hollow when tapped. Immediately turn out of the pan and set to cool on a wire rack.
Posted by Nancy/n.o.e at 12:01 AM

I LOVE molasses - in anything! I'm amazed some gingerbread cookie recipes don't include it - it's a must. The bread looks very hearty, healthy and . . . I need a slice! I can tell you're a good bread maker - that's an art in itself!

ooo, two types of molasses?! How divine! Your breads always look so fabulous. I really need to get on the bread-baking wagon.

That bread looks delicious, Nancy. I've been trying to do a better job of making bread that a little bit "healthier" (I usually am very swayed by breads with the addition of cheese, etc.) and I am making a note to come to your blog and try some of the fantastic breads that you've been making.
Oh, my dad is from Westport, I think that's a good excuse for me to try to get that cookbook!

My that sounds lovely. My mom served brown bread a lot when I was growing up. Some find molasses too strong but I've always enjoyed it so this looks really excellent.

Your loaf looks wonderful. I love the color. I like reading your bread baking adventures.

Love molasses bread!!
Yours looks particularly good, and I wish I could pull a slice out of my computer screen to toast.
Do you figure one could use all blackstrap molasses in this??

Your bread looks fabulous! I'm dying to bake up some bread right now!

Your bread looks fantastic. I love baking bread and I am so glad you have conquered your fear of yeast. Keep it up. You inspire me to bake more bread.

This looks fantastic. I think I would love the mild sweetness of this bread as part of a savory sandwich. I will have to pick up some blackstrap molasses and give this one a try!