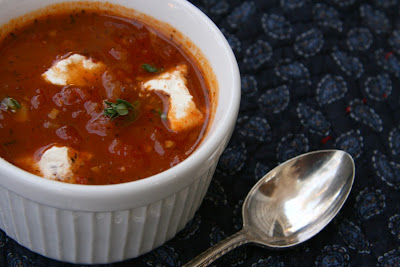 What do you do when you have a surplus of fresh tomatoes? I often make either a quick or a long-simmering tomato sauce. In the summer my default plan is gazpacho. But the last time I had an overstock of tomatoes on my counter, I was in the mood for a different kind of soup. I searched my cookbooks and found a promising candidate - a soup with the herbal flavors of Provence. 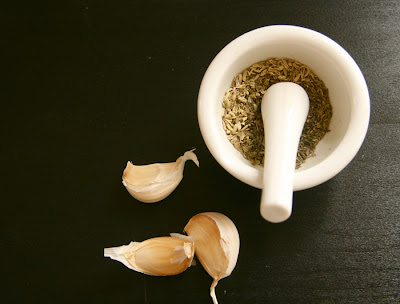 - The recipe is from The Splendid Table's How to Eat Supper

- I used fresh tomatoes. The author is very clear that Roma tomatoes are not good to use for anything, and recommends using the best tasting fresh tomatoes available, or good quality canned.

- The recipe's ingredient list specifies dried herbs. It was quite tempting to substitute fresh herbs from my little garden, but I didn't. Boy was I glad when I turned the page and found this note:

"Resist substituting fresh herbs for the dried ones called for here. They should be dried (but never powdered), just as they are in Provence's famous blend, herbes de Provence. The ready-made blend is often stale. Here you will be making your own."

- I removed the skins from my fresh tomatoes by immersing in boiling water for 1 minute then immediately putting them into an ice bath. After that the skins just rub off easily.

- I was a bit leery of the cinnamon in the recipe and used less than half and it was almost too much.

- At the end, goat cheese is stirred into the soup. I had a lovely seven-pepper-encrusted goat cheese from the farm box, which added a bit of spicy heat to the soup.

- The recipe has a variation where the dried herbs are replaced by fresh basil, and I plan to try that next time. 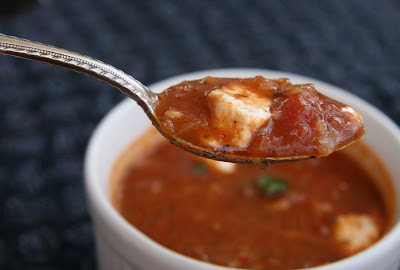 This was an unusual take on tomato soup, and I enjoyed every spoonful. The cinnamon nearly ran away with the soup, though, so next time I would add only the smallest pinch, then adjust to taste.

1. Combine the dried herbs in a small cup. Crush them lightly until they become fragrant. Set aside.

2. Film the bottom of a 6-quart pot with olive oil. Heat over medium-high heat. Stir in the onions, season with salt and pepper, and cook until the onions are golden brown, 5 to 8 minutes, stirring often. Add the reserved herbs and the garlic. Continue cooking until their aromas open up, about 30 seconds.

3. Blend in the tomato paste until there are no lumps; then add the vermouth and tomatoes. Boil for 2 minutes. Pour in the broth, stir, adjust the heat to a light bubble, and cover the pot tightly. Cook for 20 minutes. Then blend in the cinnamon, and taste the soup for seasoning.

4. Ladle the soup into bowls, and top each serving with crumbles of goat cheese.
Posted by Nancy/n.o.e at 5:39 PM

I wish I could listen to this show, but it's never been broadcast anywhere that I've lived. What's up with that? Anyway, I subscribe to the ST newsletter and now I'll have to look for this book. The soup looks delicious. I'm sorry you weren't fond of the cinnamon in this soup, because that would have grabbed my attention! ... I have a recipe for a simple meat sauce with cinnamon and mint and tho it's admittedly weird, it's sometimes a good combination! (Beautiful artsy photos, btw!)
Audrey

That looks delicious. Interesting that you add goat cheese--I wonder if my girls would eat it that way. they do like it when I make tomato soup.

What an interesting flavor combination! I will have to save it for when the tomatoes take over my kitchen counter.

This does sound like a delcious twist on tomato soup. I find it comforting to add cheese to soup for that gooey cheesy addition.

Ciao Nancy ! What a gorgeous soup ! Your vegetable box is so wonderful carrying this special cheese !

THIS looks delightfully delicious. I will have TONS of tomatoes when I get back. will keep this in mind. I love tom/basil. Bet this is even better with herbes de Provence.

Okay, now we are talking...I am definitely stealing your recipe and your tips and having at this soon. I love soup, and this one looks like a winner to me. Great photo!

mmm! sounds intriguing and delicious. i'll make this in late july when the tomatoes arrive...

I'm not a gazpacho fan so I'm glad you tried (and shared) this one instead :) It sounds wonderful! I'm also glad I'm not the only one who enjoys soup in the summer. It's so yummy for lunch.

Gazpacho is one way I love to use tomatoes during the summer. This soup sounds great with goat cheese.

What an interesting take on tomato soup. Looks like a must try.