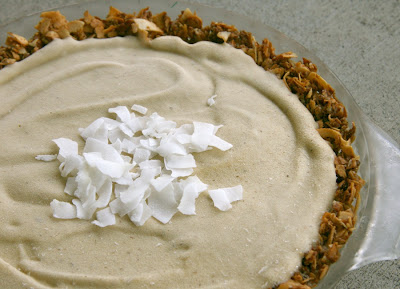 When the May recipe selections for the Tuesdays With Dorie baking group were announced, I puzzled for a minute or two about the Banana Coconut Ice Cream Pie, but then I had the perfect plan: the folks at my gym are crazy about coconut things (whereas my husband, who generally loves ice cream, definitely is not, nor are my book group members) so I decided I'd make this one for an upcoming party at the gym. In order to fit my tasters, I adapted it to be gluten-free, and I decided to up the coconut factor too; if I'm going coconut, I might as well go all out.

- The pie was chosen by Spike of the blog Spike Bakes. You can find it on her blog post.

- There's actually no baking involved in this recipe, which makes it perfect to make - and eat - for hot weather. The pie has a press-in toasted coconut crust and an ice cream/banana filling, along with some sliced bananas in the middle and on top. I decided right away to skip the banana slices but keep the mashed bananas in the ice cream filling.

- The pie's filling is made with premium-quality ice cream that is whirled in the food processor with some mashed bananas. Dorie calls for chocolate ice cream but luckily gives her permission to choose an alternate flavor. Chocolate + banana is still not my preferred combination, so I decided to churn some coconut milk ice cream for this pie. I wanted a creamy, custard-style ice cream, and started with this this recipe and made several changes in ingredients and method - scroll down to the end of this post, below, to see the recipe for the ice cream I made. Because I used palm sugar (another coconut ingredient) my ice cream was a tan color. I wish I had some coconut extract because I would have used it. Oh, and the recipe called for rum, but I left it out. 6:00 am is rather early for pie, but definitely too early in the morning for pie with alcohol.

- Dorie's crust contains butter, toasted sweetened shredded coconut and crushed butter cookies. I used unsweetened coconut flakes which toasted to a deep golden color and crunchy texture. To make the crust gluten-free, I skipped the cookies and added an equivalent volume of almond meal and toasted pecan pieces. I also added a bit of palm sugar to make up for some of the sweetness from the lost cookies and my unsweetened coconut. It's worth being a little sloppy when pressing the crust in the pie pan, because the crumbs are scrumptious!

- My pie looked a little naked (no bananas on top) so I wish I had toasted some extra coconut for garnish. Actually, I think that whipped cream and toasted coconut would have been pretty good as a topping. 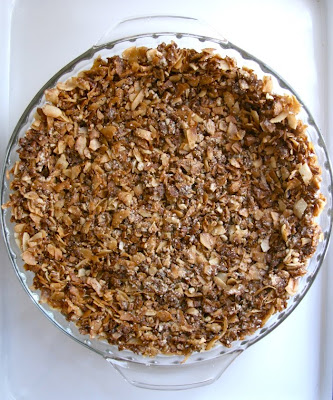 The filling was smooth and creamy and just a little sweet, with hints of banana and coconut. The real star of this dessert was the crust: it had a surprisingly complex combination of tastes and the well-toasted coconut and pecans ensured a crispy crunch.

People seemed thrilled with the pie, and we kept having to cut smaller and smaller slices to make it stretch as folks came into the gym, until it was all gone except for a few crumbs of crust (the best part!)

I'd love to try this recipe again with different flavors of ice cream, maybe sans banana; Spike made a version with coffee ice cream, my favorite flavor, which sounds fabulous. I also think the crust would pair well with chocolate. Or possibly make the crust all by itself, just to nibble on...

1. In a large bowl, whisk yolks, sugar, and salt together until pale yellow, 1 to 2 minutes.

3. Have an ice bath ready, big enough to fit the pot.

4. Pour the hot coconut milk into the egg mixture in a slow stream, whisking constantly, to temper the eggs.

5. Scrape the liquid back into the pot and cook over medium heat, stirring constantly, until just thickened and mixture coats the back of a spoon, leaving a track when you run your finger along the spoon. It should register 65-70 degrees C. on a digital thermometer. This can take up to 7 minutes but start checking temperature almost immediately. Be sure not to let the mixture boil.

6. Remove pot from the heat and stir in vanilla.

7. Transfer contents of pot to a bowl and chill until cold, preferably overnight.

8. Process mixture in an ice cream maker according to manufacturer’s instructions then transfer to a container with a lid and freeze until firm, at least 2 hours more.
Posted by Nancy/n.o.e at 9:20 PM

Oh, that looks good, love that coconut on the top. It was fun to read what you would do with different variations...you always come up with such great ideas.

That looks great, Nancy! Too bad it would never get eaten in this house. =P I just found out that our new loan officer can't have wheat, so I'll be looking for some gluten-free treats that I can make that he can eat.

Double the coconut is double the yum! I thought the crust was definitely a keeper and it would make a great crumb topping for just about anything. You're getting very creative with your giving aways!

So funny...when I was in college, it was just the beginning of the mix-in, odd flavor craze at little ice cream shops, and the flavor that I remember most was chocolate banana! Glad you enjoyed this...no nibbling on the crust, especially at the gym, though! :)

How wonderful Nancy! I should try your gluten free crust !

you read my mind- I really want to try this with coconut ice cream and up that coconut flavor. Looks beautiful!

mmm! that nut crust sounds delicious, as does the ice cream! did you really have a 6am gym party? :)

That nut-based crust sounds even better than the original! And another early gym goer - I would get to the Y when it opened at 5a :) Loved seeing the same people every day.

Not going to believe this, but the WF recipe was the first one I went to and adapted - liberally!! Love making ice cream and the coconut was perfect.

LOVE all your changes. Nuts would have been great in this.

What an interesting version of this pie. It looks wonderful. I used coconut sorbet, but I didn't make it myself.

How fun that your gym has parties!

Glad this was a hit at the gym! Always good when a recipe can be adapted to be gluten free. The coconut ice cream sounds perfect in here! Caroline had a couple of bites of this and was going for a third before I rememeber the rum - doh! Oh well, I think my parents used to rub blackberry brandy on my gums when I was teething, so hopefully it didn't cause her any permanent harm. Your pie looks beautiful, and I'm glad everyone loved it! It certainly sounded odd when I read the recipe, but somehow it works.

This no bake treat would be perfect for the hot summer days that are coming soon...we hope:D

Nancy - this looks heavenly! And I love your ice cream adaption AND the color. My chocolate store-bought variety was too dark IMO.... good, but I think of coconut "whatever" as being light and tropical! Your crust looks perfect - the topping I mean - wish I hadn't used all of mine for the bottom. It's the best crunchy "topping" for something like this!

Love your take on this recipe with the coconut ice cream! I don't think I've ever had coconut ice cream but it sounds wonderful and I imagine it would be amazing in this pie. Glad it was a hit with the folks at your gym :) I ate WAY too much of this pie all by myself so when I make it again I need to have a plan in place for getting it out of my house!