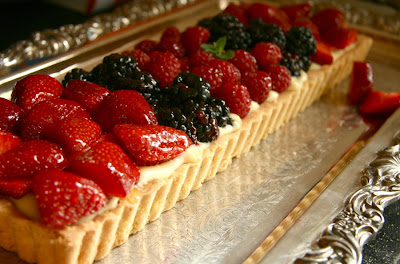 I am always excited to see one of Dorie Greenspan's tarts come up in the recipe rotation for the Tuesdays With Dorie baking group. So far, Dorie has batted 1.000 on her tart recipes. And if I can use the early local strawberries from my farm box, then so much the better! This week's Quick Classic Berry Tart was a perfect choice for this week.

- The tart recipe was chosen by Cristine of Cooking with Cristine. You can find the recipe on her site or on page 377 of Dorie Greenspan's book, Baking: From My Home to Yours.

- Dorie calls this tart "Quick" - right there in the recipe's title. While it's not exactly difficult I wouldn't be tempted categorize it as a fast recipe. The tart consists of a shortbread-like crust, pastry cream filling, fresh fruit and a jelly glaze. For best results, the tart is assembled at the last minute.

- I've always loved Dorie's tart crust. I chose to make the version with nuts, using almond meal to replace 1/4 cup of the recipe's flour. Dorie gives quite detailed instructions for making the crust; the key elements being: freezing the butter before mixing it with the dry ingredients in the food processor, processing the ingredients long enough for the dough to form into "clumps and curds", and freezing the formed tart shell before baking. Nothing too tricky, but a bit time consuming. If you have the foresight to keep an extra tart shell in your freezer (actually a great idea) then this recipe might qualify as quick-ish, but there's still the matter of making pastry cream.

- Pastry cream is a cousin to custard, in that you are using egg yolks (and cornstarch in the case of pastry cream) to thicken a liquid mixture over heat on the stove top. We've made it for other TWD desserts, so I while I wasn't particularly worried I did want to make some changes. In the past my pastry cream has been passable although you could say it puts the "paste" in past-ry cream. It always thickens immediately without giving the cornstarch a chance to cook. I decided to try for a thinner consistency this time around, so I reduced the cornstarch and made sure that my egg yolks were not super-large (I used 99 g of yolk total for a full recipe of pastry cream) The cream was a lot more manageable this time; it cooked for a while before I deemed it thick enough. In retrospect, I probably should have left it on the flame for just a little while longer.

- I piled the pastry cream high in the tart shell, disregarding Dorie's directions to fill to below the rim of the shell.

- The fruit topping was no more difficult than washing the berries (and slicing in the case of the strawberries). When I assembled the tart, I arranged the different berries in stripes so each person could cut a piece with a favorite type of berry.

- The tart's final element is a glaze made from red currant jelly boiled with a bit of water. I surveyed my jam collection two or three times without locating the currant jelly I was sure I owned, before using the apple jelly that was in my fridge. Dorie gives the option of dotting each piece of fruit with a drop of glaze, or brushing the glaze over the entire surface of the fruit. I painted my glaze with a pastry brush, and had a ton of glaze left over. A tablespoon or two of jelly with a few drops of water would have been sufficient.

- I brought the tart to book group last Thursday. The combination of the slightly thin pastry cream and the overfilled nature of the tart shell made the tart very difficult to transport. I wouldn't use the word "sloshed" but every time the car turned a corner, there was a wave-like effect in the pastry cream, and some spilled over the sides. Luckily I had taken pictures before it left my kitchen.

The book group members devoured the tart, and while I agreed that it was delicious, I was distracted by my disappointment at how poorly the tart had survived its 5 mile car trip, and by my nagging worries that the pastry cream was too thin. In truth, those things did not matter; the tart was quite good.

In fact, thanks to my husband I now know that I can bake as authentic a French fruit tart as a French restaurant in town. It turns out that on the day I served this tart at book group he had eaten a business lunch at a lovely French restaurant and had ordered fruit tart for dessert. He told me that mine was pretty much equal in taste.
Posted by Nancy/n.o.e at 5:01 AM

I love the shape of your tart! Im sure everyone enjoyed it very much! It was nice to have a fruit dessert for a change!

What a stunningly gorgeous tart! I love the shape of yours. I'm so glad everyone enjoyed it!

That wasn't sloshing, it was the fruit settling - or escaping. Your tart looks lovely! Glad it was a hit.

That looks fantastic, Nancy! And I no longer have to be jealous of your rectangular tart pan, since I bought one of my own. =) I like how you arranged the berries in sections--great idea. And your serving tray is beautiful.

I love it when there is success all over the blogosphere:D Any tart with a shortbread base is right up my alley.

Your tart is a thing of beauty! I can relate on the consistency of the pastry cream, it was one of the reasons I went with a ganache. I think we all tend to be far more critical of our tarts than anyone else would be so I'm glad your husband gave you that valuable feedback. How sweet of him!

Yay for you- the french tart maker! and how great that it tastes authentic.
I love the sections of the different berries- very pretty.
I used a mix of skim milk and half&half which made my pastry cream thinner this time.
Beautiful job.

Beautiful tart. Love how you 'stripped' the fruit.

I think the long pan, I used mine, too, makes a very elegant tart.

I think I need to make some crusts ahead so I can whip this out when the fresh berries are really in season.

Your tart is gorgeous! I love that pan. Berries are so good.

How elegant...the shape of the tart, the design, the silver tray...all of it! Just gorgeous. LOL on the sloshing part...I can just see you driving this thing to book club worrying the whole way. No need to worry, they obviously loved every last bit of it!

Oh doesn't that make you feel great to know your tart is as good as the restaurants? It's totally stunning, too, with the rectangular pan and pretty arranged berries. Great job Nancy!

Lovely tart. I love the shape you chose.

I love your rectangular tart! And your fruit arrangement is beautiful. So glad this was a big hit with book group (and that it can rival anything served at the best French restaurants!)

alternating the berries makes for a gorgeous tart. Very elegant and lovely.

Your tart looks gorgeous! I want a rectangular tart pan!!!

Thanks for baking along with me!

Wow, I love how you decorated your tart: it looks stunning!

Ciao Nancy ! I' m pretty much sure your tart was better than the restaurant's one !! Transporting desserts is always scary !!

I love a fruit tart as long as the crust is really good and there is pastry cream under the berries. It's a must!
Yours is beautiful, Nancy.

I gave you a little shout out on my blog this week!

I agree on the Dorie tarts--they are all winners! Your looks AMAZING! How great is it that you can make a tart better than one at a French restaurant?!?

Your tart sure looks great and the fact that everyone loved it--awesome! I will for sure have to make this (the real way) sometime, maybe when berries are more readily available.

What an absolutely beautiful tart!!! Mine barely survived the car trip too, but that was mostly my fault for just sticking them on a plate and hoping it would stay put :)

that tart looks so elegant! i'm always tempted to load on the pastry cream, too.

The rectangular tart pan is such a beauty! I love the way you arranged the fruit too - this is definitely as elegant a tart as you'd get at any restaurant!

Thanks for the tips on the pastry cream - mine thickened way too fast too so I'll reduce the cornstarch a bit next time.

Your tart turned out just beautiful! Your photo is just gorgeous with the rectangle tart on the silver platter...looks exactly like something you would find at a French bakery!

Your tart looks amazing Nancy. So classy and elegant.

I need to get myself a rect. tart tin. Looks stunning

I'm surprised you made it home with that platter (it's wonderful!!!). And doesn't it just make that tart look exquisite! Pastry cream over the stove just gives me the jeebies - it never turns out, but I admire people who forge ahead and know how to handle the cooking method - a very impressive tart!