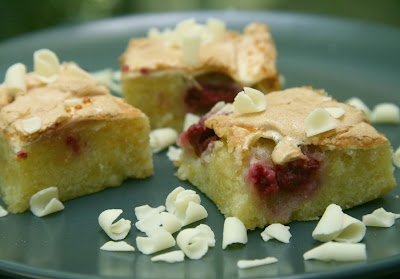 I have a confession to make: for a long time I've had a bad attitude about Dorie Greenspan's recipe for White Chocolate Brownies in Baking: From My Home to Yours. I don't like the sickly-sweet taste of white chocolate, so the prospect of white chocolate brownies was just plain unappealing to me. But then I'd reason with myself: "Self, don't forget this is Dorie Greenspan's recipe. You've been pleasantly surprised many times by her recipes; as recently as last week's coconut banana ice cream pie. Maybe, just maybe, you'll like these when the time comes to bake them for Tuesdays With Dorie."

The brownies were finally chosen for this week and I stepped up and baked them, hoping to be proven wrong in my prejudgment of the recipe.

- My opinion of the brownies is no reflection of my feelings about Marthe of the blog Culinary Delights who chose the recipe this week. Marthe is an enthusiastic and generous member of Tuesdays With Dorie, and her blog is filled with yummy treats. Luckily she loved the brownies, and she gives some very helpful tips in her post (along with the recipe).

- My hopes were raised when I was that there was a surprisingly little amount of white chocolate in the brownie recipe, and a lot of orange zest in the batter, which made the brownies smell delicious as they baked.

- A full recipe would fill a 9"x13" pan. I decided to use two 8" square pans - so the brownies would cook more quickly in the middles and release from pans easily. I baked these early, before this week's P&Q was posted, but I somehow suspected that doneness - or rather, underdoneness - would be an issue. I also lined my pans with a parchment sling so that I could remove the brownies from the pan without stickage.

- The recipe calls for ground almonds and I used almond flour/meal from Bob's Red Mill. It's more finely ground and fluffy than I've been able to achieve in my food processor. Plus, it's made with blanched almonds, so it's a lovely pale golden color.

- I was tempted to use a swirl of jam rather than berries (doesn't that sound good?) but I dutifully used the specified raspberries (exactly 20 of them). 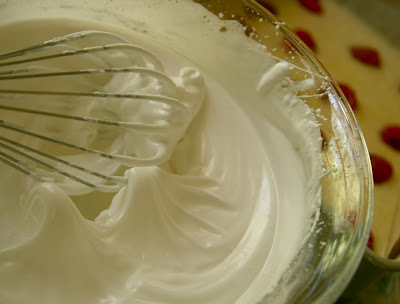 - My meringue layer turned out to be unexpectedly thin when I spread it over the brownie batter.

- It took absolutely forever for the brownies to get baked. I kept putting them back in oven for another 5 minutes. On the bright side, testing the brownies wasn't as hard as I thought it would be the knife went through the meringue layer and tested the brownie layer .

- I thought the brownies looked so pretty when I cut them - the deep red raspberries punctuating the creamy yellow crumb. I piled them on a platter with some other brownies and brought them to a neighborhood dinner gathering. Unfortunately we were not able to stay at the party, so I don't know how well they were received. I kept out a couple of brownies to photograph the next day.

- Unfortunately the meringue didn't hold up for long, and when I photographed the brownies it was a bit weepy.

I bit into a brownie with trepidation, and ...it was much tastier than I had expected. The orange flavor and the raspberry notes were nice and strong, and the white chocolate was all but undetectable. Although the brownies tasted nowhere near as bad as I was expecting, mine had an odd spongy dense texture which I did not enjoy.
Posted by Nancy/n.o.e at 12:01 AM

Ciao Nancy...I read your post like a thriller story (?). I'll use your wisdom to bake mine today ! Grazie !

Yeah, these were eh for me as well :/ And seriously, wasn't it incredibly difficult to spread that little amount of meringue over the top?!?

like Natalia.. i read your post with trepidation.. awaiting your final verdict. Guess the flavors were good but the texture a bit unique? Well, yours look amazing anyway despite the teary eyed brownie wannabes.

I like your meringue picture. So you whipped it up by hand?? Wow! I think your idea about the raspberry jam is a good one although I guess it would add more sugar. To me, the raspberries weren't very attractive. I'll have to agree with your final assessment.

My meringue went weepy as well, but then I added a very thick layer of the stuff! :-)

Your meringue is beautiful. It doesn't look thin. Sorry you weren't thrilled with them. You would never know by how pretty they are.

"Spongy" is such a perfect description for these. And not an adjective I want to use in reference to my food. =) Yeah, these just didn't work for me either. But hey, we tried!

I totally revamped mine.

No fruit, no meringue.

I think it looks like it "should" - the meringue. Course, doubling it is not such a good idea (as I did). It WAS a very strange brownie wasn't it? But such fun to make and experiment with! I agree - once berries go on sale, a "swirl" would be heaven! (and maybe no meringue)!

I omitted the meringue and topped with orange buttercream, they were delish! I thought this recipe was a winner.

They're lovely! I had exactly the same feelings about these as you (and the same issues). I kept remembering the dacquoise, which was a surprise hit. These weren't, but it was an interesting recipe.

Don't worry: I won't take it personal that you didn't like these!! ;) How can I after you've said such nice things about me and my blog?? :)

When my first batch was a disaster I knew I had to try again. I mean: I couldn't just take a picture and say: look at this big mess?? Especially since I was the one who picked the recipe!

I agree with you, these weren't brownie-like! However the texture of mine weren't that odd, maybe it's because I left out the almonds with my second attempt?

Anyways, thank you so much for baking with me this week! Even if I don't always comment, I do enjoy reading your posts each and every time as well as the tips you provide!

Yours do not look soggy, mine were very soggy in the middle, and while some people might like that, we are not wet cake/cookie/bread people. Yours look delicious! I love how you curled those little chocolate bits and threw them about, very nice touch.

I agree with your assessment completely Nancy - little to no white chocolate flavor and an oddly spongy texture. That said, they tasted fine to me, just not what I expected. I skipped the meringue after reading about all the problems and went with whipped cream instead. Probably not a repeat here, but always fun to bake along with everyone!

it was hard to spread that meringue. I agree they did smell delicious as they baked. just wish the baking time and batter would have cooked more evenly.

I'm with you, Nancy. I really don't like white chocolate. I probably would not have made these. Glad you did and that you found them better than you expected. I must say they LOOK beautiful!

I think I am in the minority this week. I really liked these. I have actually made them a total of 4 times now. Your's look lovely, sorry to hear they didn't deliver in the texture department.

I LOVE YOUR BLOG!

I stumbled onto it after watching Jamie Oliver's Food Rev. I decided to go onto his site, look around, etc. I was going through a recipe, and noticed a comment you left, a long with a link to your blog, and here I am!

Your entries look like they will be very helpful to me since I do not know how to cook!

Your commentary on each item you make is so helpful, and your dishes always turn out looking delicious and beautiful!!!!

Anyway, i'm inspired, so I'll be checking your blog periodically.