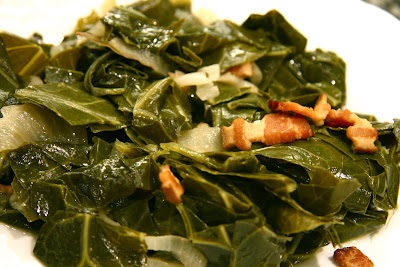 I've got a confession to make: I was an extremely picky eater as a child. On many evenings you could find me sitting at the dinner table long after everyone else had left, staring at a plate. A few cold, forlorn vegetables looked right back up at me. Eventually I'd choke down a couple of bites and be excused. Mostly this drama played out with green beans, but spinach also took its turn on the dinner plate. Luckily my mother never served brussels sprouts, or I might still be sitting there!
Well, children are resilient, thank goodness, and I've grown up to be an average eater. And my erstwhile arch-nemesis, green beans, are now among my favorite vegetables. I grew to like spinach in salads, then quiches and more. But I've been content to let the wider waters of "greens" remain pretty much unexplored, with only a little toe dip now and then.
On a trip to London in 2006 I discovered how much I (and apparently most of Great Britain's restaurants) love arugula ("rocket" over there). I had it in salads and on pasta and couldn't get enough of its peppery bite. It's become my favorite salad green. As far as cooked greens, I made a tasty crock pot chard lasagna last winter that I found delicious.

However, when it came to that most Southern of leafy greens, collards, this picky-eater Northerner remained totally unswayed. I could never bring myself to even try those olive green, slimy (looking) limp leaves that inevitably were seen in a cafeteria line, or at a meat+3 restaurant, swimming in a pool of 'pot likker.' So when my Southern-born husband wanted a taste of collards he has had to order them at a restaurant or heat up a can.
But I must say that food blogging has really opened me up to experimenting with tastes and new recipe sources. As I began to get more serious about cooking this past year, I signed up for a membership in Moore's Farm, which grows and/or sources regional produce, takes orders, and delivers the food to several locations in the Atlanta area, including a church in my neighborhood.

I ordered and prepared komatsuna, mustardy salad greens, and kale. And loved them. And my resistance weakened. I decided to order collards and cook them for my husband. Which brings me - finally - to the subject of this post! 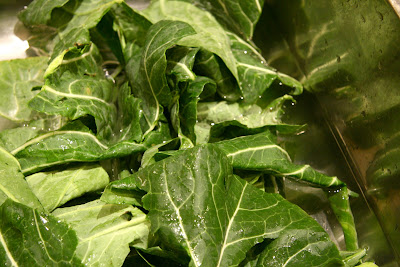 The fresh collards on one of their three soaks in the sink
When the vegetable order came in I wondered if Tyler Florence had a good recipe for collards, because if he did I might, just might, even taste some. Sure enough, a quick search brought up Tyler's Slow Cooked Collard Greens, complete with nearly unanimous favorable reviews. Done!

- I made half a recipe, using 1 lb collards, 1 quart chicken stock, etc.

- Instead of a ham hock I used 1 1/2 slices of Benton bacon (cut into lardons, of course!). The first thing I did was to cook up the lardons. Then I added the onion and bay leaf to the bacon and continued to cook per the recipe instructions (I did not add any olive oil). 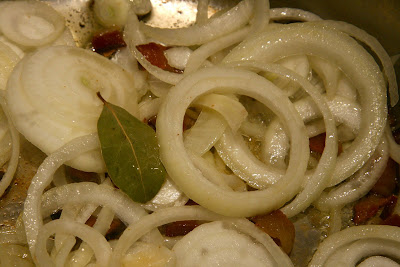 These were the first collard greens I've ever brought myself to taste, and they were quite tasty. And they were not slimy at all! They were tender but still a little crunchy. And the hint of smoky bacon - yum.

My husband was in heaven - he loved the greens. For his first serving, he ate them with only salt and pepper for additional seasoning. On the second plateful, he broke out the hot pepper sauce. For some reason, we haven't been able to find Bruce's at the grocery stores, so he made do with Texas Pete's (which comes from, guess where? Winston-Salem, North Carolina!) He actually preferred the greens without the pepper sauce, which has to be an all time first!

In honor of the occasion, my husband requested to post the following guest verdict:

"I am transfixed into thankfulness; Deepest appreciation to the following:
-Ben Franklin for electricity
-Robert Noyce for the microprocessor
-Steve Wozniak and Steve Jobs for the Mac
-Vint Cerf for internet protocol
-Sir Tim Berners-Lee, CERN, Al Gore for the WWW
-Marc Andreesen for the browser
-J.D.E. for food blog awareness / enlightenment
-Tyler Florence for his genius
-Bentons for their Lardons
-Nancy for her culinary talent – anybody from the North who can do collards like these is truly omnipotent (but we knew that already)." 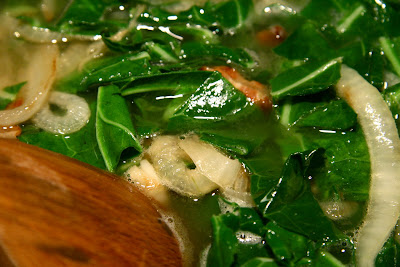 I'm submitting this to Tyler Florence Fridays. If you haven't checked out all the good food that the TFF bloggers cook up from Tyler's recipes, hop on over to the roundup each Friday and see!
Posted by Nancy/n.o.e at 12:10 AM

I would havbe liked to see your husband's 'in heaven' face !!! I tried them with red beans and pancetta and my husband (a previous finnicky eater) actually tried them !!!

I have never tried collard greens, I don't know if we have them this far North. Are they like kale?
So happy that Tyler did right by you and hubby! I'll have to give this dish a try soon.

What a moving expression of gratitude! My MIL brought me a couple of ham hocks over Christmas (now there is a sentence that my CT friends just never get to say) so I might have to give this recipe a try!

I haven't tried them either. I watched my brother, my mother and my father love them growing up. They all had theirs with a healthy addition of bacon grease. Maybe I should give it a shot with the recipe. It does look real good.

I love arugula as well - it really has such a great flavor.

As for collard greens, I suppose I'm not that adventurous yet. But I'm glad your husband gave you such a rave review.

That's terrific, Nancy. I wonder what I would have to cook to get that kind of reaction from my husband? =)

I haven't tried Collard Greens yet. I'm glad you tried them first, more courage for me. I was the one left sitting at the table too-it was those darn brussels sprouts. My Dad loves them and to this day it's hard for me to eat them.

I feel like I just hit the jackpot. I have only attempted Collards once and they turned out pretty good, but these would really make my hubby happy. I love the info about the Moore Farm. How great that you can get local produce.

Dark greens are one of my favorite foods. Yum!

i was picky too as a child, i only ate chicken nuggets, pizza and tomato soup. your husband seems like quite the character. i'm forever grateful to steve and steve too! :0) not sure i've ever tried collard greens before, must put them on my list.

I have tried collards greens--cooked by a Southern cook and loved them but have never tried making them. Great job--they look delicious!

My brother loves, loves, loves greens but the thought of them makes me a little queasy. Both of my parents were raised up north and I never had greens as a child so they're still sort of foreign to me. That said, there were the most gorgeous greens of all sorts at the market this past fall and I was so tempted . . . but I chickened out. Your collard greens not only look good but I think that maybe I could eat them without gagging. I don't suppose you have any recipes for swiss chard? Thanks for the inspiration, Nancy!

I've never had collard greens and had no idea you can buy them in a can. Maybe only in the South? Or maybe I haven't looked for them.

I need to expand my food horizons and venture into greens like you (other than spinach and arugula).

Congrats on your first greens! I admit, I haven't tried them either, but they look good.