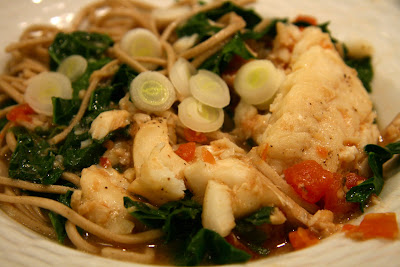 I was paging through the December issue of Martha Stewart Living. and a picture of some fish in a Hunt's tomato advertisement just imbedded itself in my imagination and would not leave.  So when I found myself with some cod last week I thought I'd give the recipe a try.  I didn't have all of the required ingredients and I was far too lazy to go to the store, so I improvised.  (I couldn't find the recipe on the Hunt's site, so you won't be able to see the mezmerizing photo, but I've included the recipe at the end of this post.)

- I didn't have any fresh cilantro, so I just left it out. It was just as well, because my husband and daughter both think cilantro tastes like soap.

- I also left out the toasted sesame oil, which is one oil I don't own.

- We really don't like sugar added to our savory food, so I didn't put it in. It may add some amazing flavor note, but I'll never know.

- I used kale instead of napa cabbage.

- During the browning phase my fish didn't really turn golden, but it did manage to cook almost all the way through. I didn't need to simmer it for more than a few minutes to finish the cooking - nowhere near the 20 minutes the recipe specifies. In fact, the fish was so flaky that it pretty much fell apart in the process of cooking and serving the dish. I found it tricky to have two things in the same pan - the fish and the kale - that needed to be cooked at the same time to particular optimal levels of doneness.

- I doubled the red pepper flakes because we love spicy food.

- My dish looked nothing like the picture in the magazine. Nothing.

This dish has a definite Asian accent, which I found surprising - but not unpleasant - in a tomato-based dish. We all liked it; my husband and daughter were even bigger fans than I was.

The soba noodles had a great texture and the kale was in that perfect state just between crunchy and tender. The red pepper added a kick without dominating the dish. I do think I would have liked the cilantro in it.
I will keep this in the rotation, especially when my daughters are visiting, since they love Asian and fish dishes.
the recipe:
Cod with Soba Noodles in Tomato Broth (Hunt's)

2. Heat vegetable oil in large skillet over medium-high heat. Saute ginger and garlic about 30 seconds or until fragrant.

3. Season cod with salt/ pepper. Add cod to skillet and cook 2 minutes per side or until lightly browned.

I cook the same way you do - which is to say that I improvise greatly if I don't feel like going to the store.

But I must say, the fish looks like something everyone in my house would eat, so that's going into my bookmarked recipes!

I love soba noodles with just some soya sauce. Your version also sounds delicious with the fish and tomato sauce, but maybe minus the heat... i have low tolerance to spicy foods, which totally sucks!

I like the changes you made! I would have to cut back on the red pepper for my family. Cod is one of my favorites, I'm always looking for new ways to make it, this is wonderful!

I have so many recipes calling for soba noodles, and I've yet to try them. I would have to leave in the cilantro (isn't it interesting how some peple have a natural aversion to cilantro? Not me. I love it! This sounds like a nice interplay of flavors: basil ginger, lime red pepper flakes... all favorites of mine!