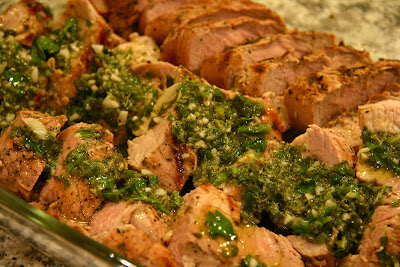 It's been a few weeks since I participated in Tyler Florence Fridays (TFF), and luckily for me this is the easiest cooking group ever! Members get to choose the recipe and can participate each week - or not. We can even post on any day we choose - the TFF roundup is posted each Friday and if you've posted that week you're included. How cool is that? Very cool, I say, especially since Tyler Florence's recipes are scrumptious!

My daughter A.L.E. specifically requested pork tenderloin when she was home for Christmas. I don't cook it very often, and don't have a recipe that is my pork tenderloin default, so I went searching to see if Tyler Florence could help me. I came across this recipe for Pork Tenderloin with Chimichurri and it had rave reviews so I thought I'd give it a go.

- The tenderloins I bought were much bigger than those specified in the recipe. I had nearly 3 pounds of meat and we made a double recipe of the marinade.

- Luckily A.L.E. prepared the marinade, because I was racing to get the French Pear Tart baked (I will post it for TWD on Tuesday).

- She used oregano from our garden (it's still growing, despite temps we had last week in the mid-teens!) and flat leaf parsley. There was also a bit of basil chopped in the mix also. We cut back just a bit on the lime, although, truth be told, we could have used the full amount.

- Because the meat is marinated in a plastic bag, a little of the marinade can go a long way, meaning you can leave lots of the sauce aside for serving time. Next time I'll save more out and put less in with the meat. I left the sauce off of some of the meat because of food sensitivities in my family, and still wish I had a bit more to spoon over the meat.

- we made some of the tenderloins with just a bit of the jalapeno peppers and the rest with a bunch of jalapenos. Of course we lost track of which was which when they were on the grill! As it turns out, none of it was all that hot/spicy, so we didn't burn anyone's taste buds!

This was a fantastic recipe! We loved it, and I will definitely make it again. It was even tender and flavorful as leftovers the next couple of days.

I made this exact same recipe a few weeks ago and we loved it! I didn't think to save any of the sauce on the side, but will definitely do that next time.

So glad you are participating again!

Ciao ! This recipe smell fantastic ! I have some cold-surviving oregano I could use too so as soon as I can I'll try it !

Yum! Your pork tenderloin looks fantastic! Great job and happy to have you back participating in TFF.

Thank you for the lemon bar recipes! This pork looks delicious :)

WOW, the only way that Tyler Florence Fridays could get any more laid back would be if they let you post Alton Brown recipes instead! I am always on the hunt for good pork tenderloin recipes, and this one looks and sounds delicious! That's a great idea to leave out some of the marinade for serving with the pork.

I can't wait to read about your pear tart!! I am going to give it a try this weekend!

This looks wonderful. I will have to try this recipe. Thanks for posting.

Gosh, this sounds like such a yummy dish. Love all the herbs in the sauce... and one one of my favorite things... pork!

Wow what a great looking meal. It looks so tasty! Happy New Year to you and thank you for being my blogging buddy!

The TFF post is up! Great job on your pork tenderloin! Thanks for doing TFF!

I have been wide awake since three a.m. and now I am craving this dish. That chimichurri sauce looks amazing and would be great on pork, beef, eggs, or straight from a bowl!

Will definately try this recipe, I think this is the one I saw him make on FoodTV. Glad you liked it and thank you for trying it out for me, LOL.

I would love to try this one, pork tenderloin is one of hubby's faves.
It looks awesome in your pictures, so happy you guys loved it!

I'm glad it turned out so well. It looks so delicious! I still had some green onions growing but I think the last snow storm did a good job of burying them.