One of the most enduring fixtures of the Christmas season in Germany is the traditional Christmas cake, stollen. This is a sweet yeast bread that is filled with dried fruits and is flavored with Christmas spices. The outside is coated with a thick layer of powdered sugar, which is said to be a representation of the Christ Child in His swaddling clothes. By tradition, the stollen weighs 4 pounds and is often filled with a marzipan center.

I've tasted stollen over the years, and have always enjoyed it. Sometimes stollen can be a bit dry, but it always has great flavor. Legend has it that stollen originated in Dresden in the 1400's. Dresden even has a special Stollen Festival each year.

Although I did not make it to Dresden on my most recent trip to German in December (I've been there previously) I saw lots of stollen at the bakeries and Christmas markets. My hotel in Berlin even had a special little shop set up in the lobby to sell Dresden stollen.

My suitcase was too full to bring any stollen back from Germany with me, and I didn't give any thought to the possibility of baking my own until I saw this recipe for Dan Lepard's Extra Moist Stollen (recipe here, forum discussion here). It seemed like the thing to bake on a quiet winter's day in the week between Christmas and New Year's. Although my yeast-baking experience consisted entirely of (1) Kugelhopf for TWD and (2) the King Arthur English Muffin Bread, I jumped right into the deep end and tried this recipe. 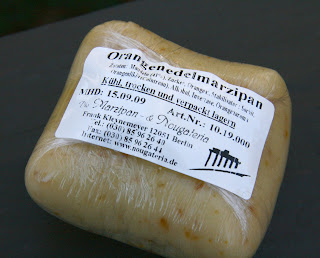 
- For the mixed-in fruit, I used golden raisins, unsulfured currants, and citron. (I didn't have mixed peel but have lots of citron) I macerated the raisins and currants in warmed dark rum, and used water where the recipe called for rum.


- I grated lime zest because I was out of lemons.


- At the Christmas market in Berlin I bought some orange flavored marzipan, which was perfect for this recipe. I filled one end of the stollen with the marzipan and left the other end plain.

- The recipe gives a choice of rye or wholewheat flour to add to the dough; I chose rye flour.

- I baked it at 350 degrees on a cookie sheet lined with a silicone mat. After baking for the prescribed 35 minutes the stollen was still raw on the bottom, and the internal temperature was somewhere under 150F.

- At that point I turned the oven to 'convect' and took the stollen off the cookie sheet, baking it directly on a cooling rack set on the oven rack so the heat would reach the bottom. I baked it until it registered 185F on an instant read thermometer (I lost track of the time but maybe between 15 and 30 additional minutes?) I declared it "done" and took it out of the oven.

- After letting it cool, I gingerly sliced into the loaf. As a whole it was very dense, yet moist. The very center was still a bit undercooked.

My word, this stollen was amazing. My husband and I LOVED the flavor and rationed it out over several days' time. He preferred the end without the marzipan, and I have to say that I agree. Daughter A.L.E. was home at the time I baked it and there was some flavor in it that really bothered her. We've sort of narrowed it down to the cardamom, so if you aren't a fan of that spice, leave it out.

Every time I looked at it I had this sense of unreality: Did this creation really come from my kitchen? I can see how yeast baking can be totally addictive!

By far the best part of making this stollen (aside from how GOOD it was) is the level of support that I personally received from Dan Lepard, on his baking forum. I posted a couple of questions, and he answered them quickly and completely. I asked him about the way my stollen baked up and learned that I should have used a smaller baking pan or a baking stone (and I think a higher oven temperature). Thanks, Dan!

I plan to bake this again - Christmas season or not - and will make the adjustments Dan suggested. I'll wait a little while before diving in that deep again, though! In the meantime, I'll take a giant step back and take baby steps in further yeast adventures. 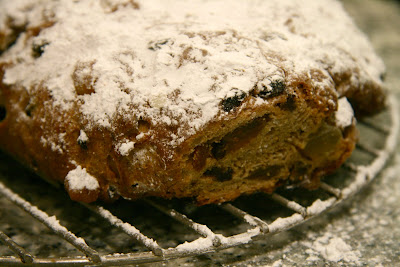 Your stollen looks amazing. I'm sure the taste was out of this world. You've got the bread baking bug! :P

That's great that Dan Lepard was so helpful. I'm glad it all worked out for you.

(I, too, probably would prefer the kind without marzipan--I'm not a huge fan of it.)

Awesome!! I'm so glad you've got another yeast recipe under your belt!

Ciao ! This really sounds so good ! I love Stollen but I prefer the one without marzipan. As you say why make it only for Christmas ? (maybe to avoid getting too fat ?) I'm glad you enjoied yeast !!!

Wow Nancy, I am impressed! Before long you'll be running your own yeast-baking forum! The stollen looks REALLY wonderful. And how great that Dan Lepard was so accessible and helpful. Sounds like a great baking experience all the way around.

Oh, and I made the KA English Muffin toasting bread that you posted about -- it baked up perfectly and was as wonderful as you said it would be!

Stollen is the best. Yours looks fabulous! I have never made it before!

Am I the only one who loves it with marzipan!? It came out terrific!! You did a wonderful job with it. How nice that you could get advice on it.

I have never had stollen before - just seen pictures. Yours looks great! Glad you have gotten over any fear of yeast. (really not so scary when you get used to it!)

I agree this looks amazing...you're not being shy about your yeast-baking at all. I love quiet baking days...I'm going to spontaneously schedule some of them for February!

I have seen so much stollen lately that I KNOW I need to make it. You've acclaimed this recipe so much that it seems like a good choice for my first try. Looks delicious.

Hi Nancy,
I hope you don't mind, but I've given a link to this post from my blog at http://ohgoshandbother.blogspot.com/2012/02/thats-way-to-do-it.html

I've recently taken all my recipes and old posts offline, to talk instead about food blogging and copyright issues, and I just feel that your blog has some great examples of "best practice", which I'd like more people to read, enjoy, and learn from.