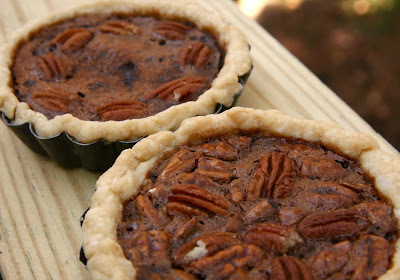 Although I had planned our Thanksgiving pies: Dorie's Twofer pie and two of our all-time favorites: my mom's apple pie, and our dark and spicy pumpkin pie, I ended up with an unexpected opportunity to squeeze in another kind of pie. My sister-in-law became ill just before they were to host her side of the family for Thanksgiving. I offered to help with cooking and found out that what they really needed was pie.

My brother jokingly hinted for a chocolate pecan pie. He'd eaten one years ago, and really loved it. I did a bit of online research and found this recipe for Texas Chocolate and Pecan Pie - from the March, 2000 Bon Appetit. 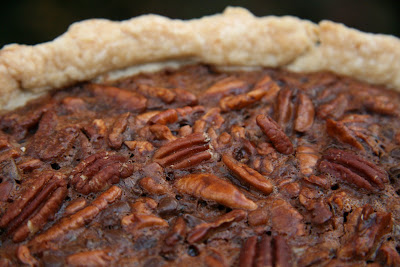 - I decided to try the Cook's Illustrated pie dough (I found it in the Fall Entertaining 2008 issue, but you can find the recipe online, eg., here). This crust has a secret ingredient: vodka. Apparently the alcohol keeps excess gluten from forming. The extra liquid makes the dough soft and pliable (it's a dream to roll). In the oven the alcohol evaporates and the pie is left with flaky crust.

- I substituted golden syrup for the light corn syrup. I do that pretty routinely. Golden syrup has a mellower flavor, and is not as sweet as corn syrup.

- Along with the butter, I melted 2 oz Valrhona semisweet (56%) and 2 oz Nestles semisweet chocolate chips.

- When I mixed up the filling, I snuck a little taste and thought it could use a bit more chocolate. To boost the chocolate quotient I sprinkled mini chips over the pecans before pouring in the liquid filling. Some of them floated to the top of the pie, which you can see in the photo above.

- I studded the top of the pie with a few tiny pecan halves.

- I saved enough of the dough and the filling to make 2 mini tartlets - I lined one tart crust with pecan pieces and one with chocolate chips. I placed tiny pecans on the tops. These baked for 30 minutes. 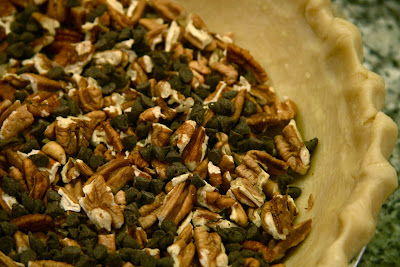 A.L.E. and I each had a tart as a Thanksgiving prelude, while we were cooking. This is a seriously delicious pie!!!

The last time I'd eaten a chocolate pecan pie I hadn't cared for it. I think the switch from light corn syrup to golden cane syrup was a good one, keeping it from being too sweet while adding a certain richness of flavor.

This may not replace my usual pecan pie, which is made with maple syrup, but it ranks right up there next to it.

And can I tell you how fabulous this pie crust recipe is? Wow, it was easy to put together, and easy to roll and handle. It is amazingly flaky, and very tender. All due to the vodka. I'll do a taste test with Dorie's crust when I post the Thanksgiving Twofer Pie!

[update: find the taste test at the end of the Twofer Pie post] 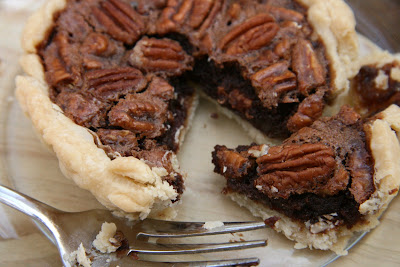 Ciao ! I can't wait to try this crust ! And the pie I have some pecans left from the twofer pie ! (by the way I just ate the pumpkin soup:delicious !)

That looks really good. Where did you get your golden syrup? Because I have been looking for it and have not been able to find any that I didn't have to order online.

Your pie sounds so good and I have used the vodka recipe before with great results. I had to adjust Dorie's pie crust recipe a bit, let me know how yours turns out.

I love CI's pie crust even though they use some shortening. I've never tried the vodka one, but their previous pie crust without the vodka is amazing too. Before I got to the end of your post, I was hoping you'd say you would do a comparison! I always trust your taste testing.

First, I love your idea (from your pumpkin soup post - that looks great too!) of splitting up Thanksgiving dinner over two days. What a great way to get to actually savor everything without ending up overstuffed. This pie looks fabulous. I like your idea of using golden syrup instead of corn - I love traditional pecan pie, but if I have one gripe about it, it would be the usual oversweetness. This one sounds perfect, and I will definitely be trying that CI crust!

Thanks for your comment about travel (and please pass on my sympathies to your daughter for getting stuck behind a family in the security line. I just want to wear a t-shirt when we travel that says "I apologize for us."). We did not have a devoted family line on the way up - although I am not surprised because when it comes to instituting new innovations, B'ham is not usually on the cutting edge. But the security line was mercifully short, and the kids did great in the aiports and on both flights. Now, we just need that same luck again today!

Oh, and I am so intrigued to hear about your new use for the dark rum! Is is something other than a shot to soothe the nerves after traveling with small children?

The Cook's Illustrated pie dough has become my "go to" dough. I love the ease! The chocolate pecan sounds amazing!

That pie does look divine. Hello, it has chocolate. Sounds better than the TWD twofer I wasn't too thrilled with. Didn't hate it, though.

Erin: I think I found the Lyles Golden Syrup at Whole Foods. I believe that Cost Plus World Market and Fresh Market also carry it. I have ordered specialty ingredients online; it's easy and sometimes preferable to running all over town or not being able to locate it otherwise.

Fit Chick, I made Dorie's crust as written, but I didn't pre-cook it, raised the oven temp, reduced the pie pan size, and it cooked fine! I'll be posting the Twofer Pie on Sunday.
Nancy
Nancy