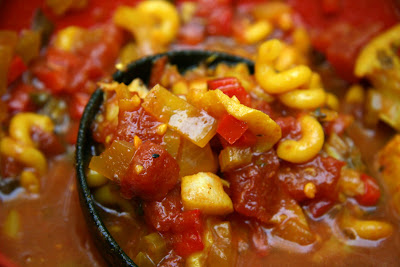 Back before Google, Epicurious, and the Food Network, finding a good recipe took a bit of digging and, often, some crossed fingers as the chosen recipe was being prepared. Although I now use my computer to research recipes and benefit from the reviews of online cooks, I also have an embarrassingly large bookcase of cookbooks, as well as files stuffed with recipes I've torn out of books and magazines over the years. 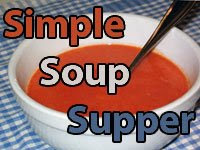 Last week I was sifting through these accumulated clippings, and pulled out a soup recipe by Pierre Franey from his long-running New York Times column, "60-Minute Gourmet." Franey was an elegant and accomplished cook, French born and trained, who collaborated with Craig Claiborne on several books and projects, and wrote the Times column for around 20 years. His recipes emphasized fresh ingredients and simple but sophisticated techniques to bring delicious food to the busy home cook. The Times published two books of recipes from his column: 60 Minute Gourmet, and More 60 Minute Gourmet. My dad, an avid reader of The Times, was a huge fan of Franey's and gave me the 1979 60 Minute Gourmet more than 20 years ago.

The clipping I found was for French Fish Chowder ("quicker than bouillabaisse, a flavorful fish chowder for cod and orzo.") I had most of the ingredients on hand, and a quick trip to the fish counter brought me cod and halibut.

- This recipe comes together considerably quicker than the promised 60 minutes.

- I crumbled the saffron threads into the measuring spoon. It took a surprising number of those threads-of-spun-gold to measure 1/4 tsp. I think that perhaps the saffron was meant to be measured before breaking, in which case I would have used far less of it.

- It probably would have been worth the effort to have made a fish stock. Although I contemplated using chicken or vegetable stock (both of which I had), I used water.

- There was no orzo in my pasta drawer, which I realized when I was ready to add it. The closest dry pasta choice was alphabet soup noodles. Somehow that just didn't seem to strike the right note with ingredients like saffron, halibut, fresh thyme and cod. Instead I used some fancy leftover pasta that I had stashed in the freezer. Since the pasta was already cooked, I simmered the soup for a few minutes longer before adding the pasta (and a few minutes shorter after).

- I served the soup accompanied by a salad, and a loaf of crusty bread with a plate of dipping olive oil. I didn't make the croutons in the recipe.

- The fresh thyme and basil were from my herb harvest!

- This soup was unusual and flavorful. The turmeric and saffron gave the fish an orange glow and the broth an exotic taste. I think I'd use a little less saffron in the future. Given the price of saffron, cutting back is a great place to economize. Actually, the recipe specifies saffron as an optional ingredient.

- Although we had bread on the side, I think the soup needed the recipe's croutons. It was just calling for a little more fullness in flavor. I wouldn't skip making croutons again. In their absence, maybe a sprinkling with grated parmesan would have been good. I mean, what isn't improved by a shake of parm?

- My husband gave this an 8 (out of 10) and a thumbs-up for seeing this at a future dinner. Which is great since we had lots left over.

This is the first official post in my new blog series Simple Soup Supper. I'll be cooking lots more soup. Join me with your own soup recipes!
Posted by Nancy/n.o.e at 3:55 PM

Mmmmm. I've left a surprise for you at my blog!

Ciao ! what a nice soup ! My son always asks for soup even this morning and when I refused he said : Grandma makes it even for breakfast !

I LOVE your Simple Soup Supper idea! You can bet that I'll play -- we are big soup people at my house (well, I am a big soup person, and I am the cook. Therefore, we are big soup people). Love the logo -- your daughter did a great job! Your fish chowder looks fabulous. I love the fact that you had alphabet noodles, but not orzo - that sounds like my kitchen! I like that this chowder calls for cod; David calls that a good "Yankee fish." Speaking of Yankee fish, did you ever have the clam chowder at the Firehouse Deli in Fairfield? Oh, now I'm craving it.