We're back to introduce a guest post by A.L.E - the one lying on the floor in the banner picture up at the top of the page. She's a great cook, and we love to help her because she never forgets to save some for us. Too bad she lives 1000 miles away, or we'd be spoiled all the time.
-The Dogs 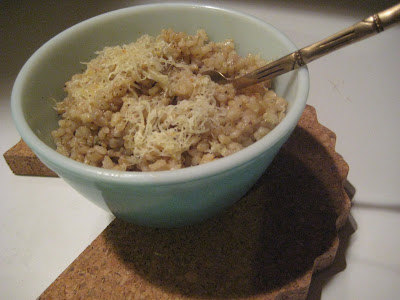 I'm excited to be featured on my mom's blog - that is, other than in the pictures on the side! We've always had a great time cooking together, and I'm a regular reader.
I make this risotto at least once a week. It's basically the staple of my diet as a cash-strapped grad - easy, filling, (fairly) healthy, and amazing as leftovers. With all the alterations I've made to the classic formula, I almost feel guilty calling it risotto! In school, I lived with mainly vegetarians and vegans for a year and a half and, although I remain omnivorous, I picked up some habits.

I use oil instead of butter and am currently trying vegan stock instead of chicken - since the most questionable parts of the most miserable birds go into chicken bouillon and my guilt-free chicken source - the local farmer's market - just closed up shop till spring, this is a reasonable and tasty compromise. Also having vegan friends to feed, etc.

Using brown rice is definitely unthinkable in a classic risotto, but it's much healthier, it's ridiculously cheap in bulk, and I like the feel and flavor. And usually I'm the only one eating at my house, so I do what I want.
Rustic Risotto
Ingredients:

Salt - if bouillon is salt free - and pepper

Saffron, or other seasonings of your choice (mine was left in our house by summer tenants, I probably wouldn't have sprung for it otherwise) 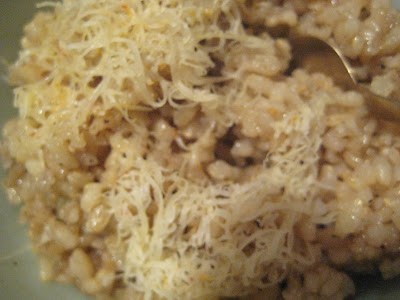 Have your stock in a pan on low heat - throw in any salt or seasonings. Heat a generous pour of oil in a pot or pan (I use a cast iron skillet) on medium-med hi heat. You'll know it's hot when you flick some water into the pan and it sizzles. Saute the rice until it gets vaguely transparent. Don't let it burn! When the rice becomes translucent, throw in the wine, stirring to incorporate. As it's absorbed, turn the heat down to a simmer.
Crumble in a few threads of saffron if you're using it, and start adding the stock about a cup at a time. Either stir constantly, occasionally, or go watch TV in the other room - I usually opt for the last option, but I'll stir if there's company, because it is a little better that way.
When it looks thirsty (liquid only covering lower half of rice or thereabouts), add another cup. You'll probably need to throw in the cup of water when you run out of broth, because brown rice is pretty thirsty. Remove from heat when the rice is fully cooked and most of the water is gone but it's still quite moist.
Serve hot. I like parmesan or cheddar grated over mine, but you can also swirl in pesto or add squash, tomato, sausage, chicken, whatever you feel would add that certain something. Go wild, and remember that you can't mess this recipe up: it's "rustic."
Happy cooking and eating!
- A.L.E.
Posted by Nancy/n.o.e at 7:19 AM

I didn't realize that risotto was that easy. You're giving me new recipe ideas, sis.

Hey girl - I completely understand about next week! As you know, I had to do the same thing this week. :)

I "can't mess this recipe up?" Now those are fightin' words! Seriously, this looks fabulous! Vegan stock is a good idea -- that way, I won't have to expend the extra effort to not think about what's in the bouillion when I make this. Although I bet it's good to be an omnivore when you come home, what with all that Benton bacon. Great recipe!

This looks comforting and delicious.

I *love* risotto so I will definitely be giving this a try! I've always used arborio rice - I'm glad to hear that you like using brown, that would be a healthy change. I also didn't know that about chicken stock. Something to think about!

Glad to know you can use brown rice no problem because I am a cash-strapped undergrad. Thanks for another meal idea :)

Maybe summer tenants have been gaining class through the decades? What my tenants left in the kitchen cannot be described in the combox of a food blog! In a nutshell, it necessitated the use of lots of chemicals, and liberal sprinkling of the word "eeewww!"
Nancy

Nancy - I left you an award - stop by and pick it up when you can!

It sounds delish! Perfect college food (my bulk-produced college food of choice was my boyfriend's mom's spaghetti sauce. It was wonderful, but I ate so much of it, I can barely bring myself to make it now, LOL).

Nancy -- I laughed when I saw your comment. Yes, I slayed the kugelhopf dragon. But it took two very late nights (not really the kugelhopf's fault, more poor planning on my part) and a whole lot of stress/uncertainty about whether the dough felt right, whether it would rise, did it rise enough, etc. In retrospect, there is really not a whole lot of hands-on time involved, but there is a lot of rising/worrying time involved. In the end, we thought the kugelhopf was good, but probably not one that I'd make again. I was up past one this morning kugelhopfing, and Elizabeth appeared bright eyed and bushy tailed at 6 a.m., and of course was completely unmoved by my pleas that she go back to sleep because I was up late making kugelhopf. Are you going to make it?

Memories . . . I used to make risotto for myself at least once a week, without fail, when I first graduated from college. I used to but a giant container of arborio rice and lots of stock and then use whatever else I had on hand. It was a great excuse to experiment and I think that the most memorable was my green apple risotto. It sounds weird but with cheese and black pepper it's actually really good. Nigella Lawson also has a great recipe for quick, stovetop rice pudding risotto if you're ever in the mood for something sweet. I think that making risotto is so relaxing and cathartic. I've never tried it with brown rice before but I think I'll give it a go.