Pasta + Bacon = Heaven on a plate 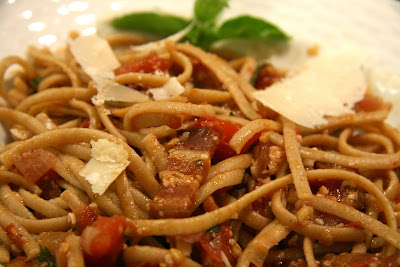 Food blogging has its positives and negatives. On the plus side, we're eating a whole lot more variety, as I either stumble across new recipes or research new ways to cook what I have on hand. The baking has been a challenge, because I just don't need that many sweets. So I've made a deal with myself: if I work out 4+ times in the preceding week, I can bake my TWD challenge. Then I can justify, somewhat, the extra sweets that creep my way.

I typically watch the Food Network when I'm at the gym. Actually I never watch it any other time. Anyway, one lucky Friday I managed to catch Guy's Big Bite (and the beginning of Tyler's Ultimate). It was the "Oak Town Squawk" episode, and Guy was making a chicken dish and a pasta side dish. Well, the chicken sounded pretty good, but that pasta really got my full attention. It had a tomato/bacon sauce. Now if that's not my idea of nirvana, I don't know what would be. It's the perfect type of main course for us, and it has bacon, so I immediately put it on the "urgent" list. Bacon gets to automatically cut to the beginning of the line.

- It's nice to watch the chef make the food and then check online for the recipe and read reviews of, oh, 39+ other people who have cooked this before me.

- I gave my husband the choice of pasta and he picked whole wheat linguine. The sauce has enough heft to hold its own with a whole grain pasta. Spinach pasta could also be good.

- I used 8 oz of Benton's bacon. It is a strong slowly-smoky-cured bacon , and I figured that would be enough (plus, that's all I had in the freezer). It would have been fine with a few more ounces, but a full pound would have totally overpowered the sauce. With regular bacon, I'd say 10-12 oz would be great.

- I drained my tomatoes, and reserved the juice in case I needed to add it back in later. As it turns out, the tomatoes were still really juicy. In fact when I added the red wine, there was nothing to "deglaze" = it just joined the tomato juice in the pan. I turned up the heat a bit and reduced it. Of course that also cooked the tomatoes a bit more than I'd have liked.

- If you're concerned about the red pepper flakes, what Guy did was keep them in one edge of the pan while everything was cooking. This infuses the oil with some of the heat of the peppers. Then you could remove them when you add the tomatoes or the wine. We like spicy food so I didn't worry about the pepper flakes.

- add the pasta to the sauce slowly, stopping when the right proportion of sauce/noodle is reached. Mine actually had more sauce than the pictures show. 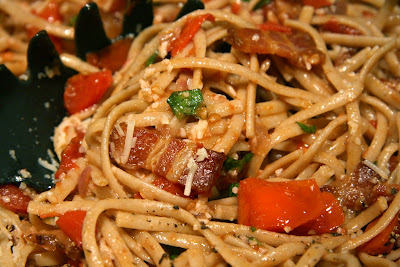 - Guy Fieri is my new hero! This is possibly the best pasta I've ever put on the table. The funny thing is that it's very similar to sauces that I whip up all the time: garlic, onion, olive oil, wine, tomatoes. A quick saute, toss with basil and cheese, and there's dinner. But the BACON takes it to the veritable heights of pasta perfection.

- The red pepper flakes gave this some heat but they didn't stand out.

- My pictures don't begin to do this dish justice. It had a lot more sauce/pasta

- I served this with arugula salad, with freshly picked arugula from our garden! 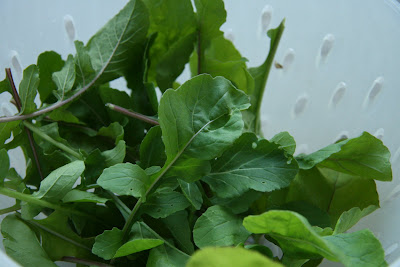 Directions
1. In a large stock pot, boil 3 quarts of water, when boiling add 2 tablespoons kosher salt and the pasta and cook until the pasta is al dente.
2. In a large sauté pan over medium heat, add bacon and sauté until bacon is crispy. Remove bacon to drain on a paper towel-lined plate and remove 3/4 of the bacon fat from the pan. Add extra-virgin olive oil, onions, and red chili flakes. Cook until onions are translucent, add garlic, cook for 2 minutes then add tomatoes. Sauté for 5 minutes, then deglaze with wine.
3. Drain pasta and add to the tomato mixture pan. Add basil and bacon. Toss with Parmesan, and add salt and pepper, to taste.

I know that Ambrosia is supposed to be THE food of the gods. But if I were in charge of the gods' menu, I'd make it something savory. And this recipe might just be what I'd feed them!

Here's another pasta + bacon recipe that I've wanted to try:
Pasta with Tomato Broth, Bacon, Peas and Ricotta, adapted from the Little Owl
Posted by Nancy/n.o.e at 9:49 PM

Thank you for your help on tweaking etc. for TWD.
I have been looking at your blog and definitely see a little 1960's influence either you or from your parents. I have not even seen the word 'Tassajara' in forever. I thought I was the only one who knew what an underground newspaper was but perhaps you do too. And your collection of pans, oooohhh.
I love that you have a close family, it is charming and wonderful.
Be blessed

mom, i have to say, the title is this post may just be the meaning of life.
i am very excited to try this fancy bacon when i get home. i never buy meat for myself over here for ethical reasons, as you know, but also because i am kind of afraid that i'll mess up when cooking it somehow...but when i get home, all [non-meat] bets are off!

Pasta and bacon IS heaven on a plate. This is my kind of dinner for sure -- this would definitely be the main course for us (because if I tried to serve it as a side, I'd end up eating two main courses). In fact, running through the ingredient list, it looks like I have most everything, so I might make this tonight for the visiting inlaws.

I meant to mention (on the kugelhopf front, since I know you might ask Santa for a pan) -- my pan is from Williams-Sonoma, and even thought it says "moule a Kougelhof" on the box, to me there is nothing particularly "kugelhopfish" about it. Also, it's a 12 cup capacity, which is probably why mine didn't make it to the top of the pan. Someone posted a picture of one from Sur la Table (although I didn't see it on their website) that looked more authentic to me; actually, this one is similar: http://www.kitchenemporium.com/cgi-bin/kitchen/prod/06nw59937.html. Of course, as far as David will ever know, I think that mine is the most exquisite kugelhopf pan ever!

My brother and I were just remininscing about the rice dish that my mom used to make us...with tomatoes and bacon. (It was a 50s/60s thing, I think.) This would so bring it back! I'm not a spicy food person but I'm starting to like a little bit of red pepper in tomato dishes ...

Thanks for the link, Cathy! That is EXACTLY what I'm looking for. I might ask for that stunning 10 cup model, and also a 6 cup one from Bridge Kitchenware: http://www.bridgekitchenware.com/browse.cfm/4,183.html
Then I can make a double recipe, split the dough 40%/60%, freeze part and cook the other!

Hey, Amber! We're the same age (well, you're actually a year younger, but who's counting, right?) so we've probably had similar influences. I was surprised to see the Tassajara Bread book is still in print. And Judy Collins' song "I Always Cook With Honey", do you remember that gem?

I agree--it's always nice to make something that has gotten lots of good feedback from other cooks. I only blog about baking, but I cook a lot as well, and I've been looking for new things to get us out of our current menu rut. I'm bookmarking this one! =)

This sounds incredible, I can already taste the bacon! What a delicious recipe to have come across, that Guy is pretty talented ;).

This sounds just delicious. One of my favorites is using leftover pasta (just the noodles) and mixing it with bacon & eggs for breakfast topped with parm. I just put a little butter in the pan, toss in the pasta, whip up an egg and toss it in there, then add cooked bacon.

I have to confess I'm not a big fan of Guy's, but this dish does look wonderful. I agree with you that bacon is definitely ups the desirability quotient in any recipe.

I recently have become a fan of whole wheat pasta. My personal favorite, even though it's slightly more expensive, is DeCecco's line of whole whet pastas.

I'll be making this dish. I know my son will love it!

I have been cooking a dish like this for a couple of years now. Can't remember where I first saw it. I use a 28oz tin of chopped tomatoes and add it to the browned bacon, onions and chili flakes and cook it down a bit. I add the cooked pasta and refrigerate overnight as the whole dish matures and tastes even better.

I have access to local double smoked bacon which is especially heavenly for this dish!