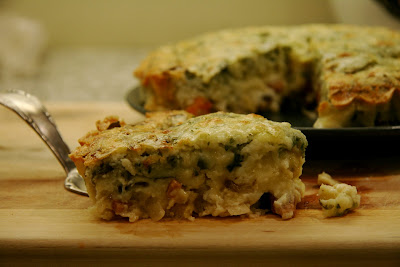 Perfect attendance. My favorite savory ingredients, all present and accounted for. Oh, and cottage cheese, the reason I chose this recipe, also "here." I'd found some fancy organic nonfat cottage cheese in the fridge (left behind by daughter J.D.E), and I was looking for a way to use it up. My husband was away, so quiche would be a perfect dinner for me. He's not a fan of quiche and I love it.

- I used leeks instead of onions.

-I added a few halved cherry tomatoes to the onions in the saute pan.

- I used 1/2 cup of Benton bacon lardons instead of the turkey ham.

- I used fancy cave-aged Emmenthaler swiss cheese and fancy aged sharp cheddar cheese to go with my fancy bacon. I used Asiago cheese to sprinkle in the bottom of the pan. All the cheese I used was full fat.

- I used a tiny bit of olive oil instead of cooking spray for the saute pan and the baking pan.

- I would have used egg substitute but I was out of it. I've used it before in quiches and it turns out very well.

- After layering the cheese and the bacon/leek/tomato mixture, I combined everything else in the food processor except the spinach and the swiss cheese. I added the spinach at the end and just pulsed an additional second or two. Then I stirred in the swiss cheese (I like cubes of swiss in my quiche).

- I used my wonderful new 7 3/4" tart pan with tall sides. This recipe can also be baked in individual servings in muffin tins.

- My quiche was taller than the original recipe, so I baked it in a cooler oven than specified, and for a longer time.

Because of the flour in this dish and the bed of shredded cheese, it sort of makes its own crust. I really didn't miss the usual quiche pie crust at all. This quiche had great texture and flavors - very creamy rather than custard-y as a more traditional quiche would be.

I'm glad I used my tall tart pan, which is smaller in diameter than the specified 9" pie pan. I wanted a taller quiche with lots of interior volume, and it worked. This pan is my new favorite. (I originally bought this pan to bake Delia Smith's Deep Lemon Tart. Mine is smaller than the pan size she specified, so when I finally get a chance to try the lemon tart, I'll be pro-rating that recipe to the volume of this pan.)

The quiche was VERY savory. The Benton bacon has quite the hickory-smoked assertive flavor, and the lardons threatened to overpower the taste buds but the sharp cheeses held their ground. Barely.

The way I cooked this recipe, it lost some of its "light" qualities because I didn't use low fat shredded cheese (I don't really like it). In the future I could cut back the fat content by using egg substitute (which I was out of) and possibly a smaller quantity of cheese and bacon. In fact, I think I'd skip the cheddar and focus on the swiss-type and parmesan-type.

This quiche was my dinner for three nights, and I really enjoyed it. I had an extra large portion the first time, but the others were fairly average, imo. The recipe says it makes 8 servings, but if you're having it for dinner, I'd say 4-6, depending on your side dishes (and your appetite).

Thanks again to CB of I Heart Food4Thought for giving permission to use her "Cooking Light Night" logo.
Posted by Nancy/n.o.e at 1:43 PM

This looks wonderful. I love quiche and have been looking for crustless ones. I get so many good recipes from Cooking Light - it will be fun to see which ones you and others recommend. Had a Cooking Light Night myself last night - but I love the idea of the event.
Audrey

I am reading this while my Tuesdays with Dorie creme brulee is in the oven. It's late and I haven't even had dinner yet.

Your quiche has reminded me how hungry I am. It looks and sounds delicious. Again, I am amazed at your ability to tweak recipes. Greek yogurt and milk would never have occurred to me as a substitution for evaporated milk!

Oops, I realized that I hadn't linked to the recipe, and now I've fixed that in the post.

Matt, I've been substituting in recipes for nearly 20 years, usually to make them lower in fat. I actually use evaporated skim milk in place of cream quite frequently. I was surprised to find that I was out of it, so just picked something that I thought would be similarly creamy in texture but not add fat.
Nancy

Me again...I was truly inspired, and just posted tonight's dinner (even though I haven't made it yet.) Thanks for the link - I was going to do a search -- and make note of your substitutions.
Audrey

Oh wow. I totally have to star this to try on my CL night too! Spinach quiche and its light? That rules! Maybe I need to start making a list of CL bloggers so I can have a running list of must-tries huh? :)
/Clara