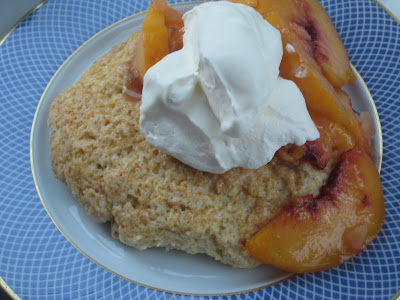 Our book club met last evening (2x/month for us) and I, of course, offered to bring the sweets. I had the peanut butter/oatmeal chipsters in both variations, and I wanted to bring something else. I'd already baked and served the chocolate Whopper cookies to this group (will be posted next Tuesday), and I was hopeful that the new TWD recipes would be announced in time, but they weren't. I turned to my ever-growing list of desserts-to-be-baked and selected a Ginger Peach Shortcake recipe from Bon Appetit. I love cooking with local peaches when they're in season - nothing so good as a Georgia peach! 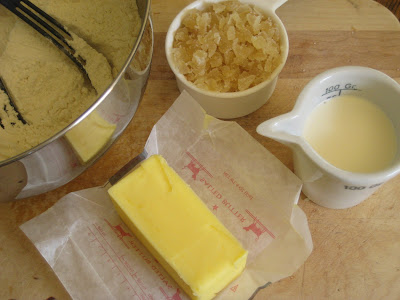 The cool thing about this recipe is that it uses ginger ale AND chopped candied ginger in the shortbread (along with just a little heavy cream and butter.) I wasn't sure if the shortcakes would puff or spread. I took a gamble that they would puff, but instead they spread. Instead of splitting them, we just piled the fruit and whipped cream on top. 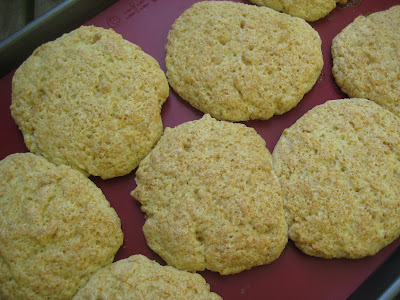 The peaches are macerated with lime, a bit of sugar and some MORE candied ginger! 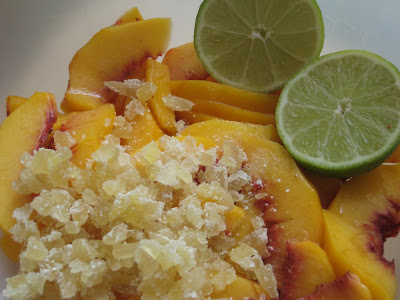 The Verdict:
This was absolutely delicious and a great way to enjoy fresh summer peaches. But not without guilt! The ginger/ginger ale really tastes great in the shortcake. And the ginger/lime is a fantastic combination in the fruit. I left the whipped cream unflavored and unsweetened, which was perfect.

I think the next time I make this I will try some of my usual healthful substitutions, and I'm guessing we will still like it a lot. With a bit more peace of mind!

Some changes I might try:
- Use at least half White Whole Wheat flour
- Substitute evaporated nonfat milk and whole milk for the cream
- reduce the amount of butter
- reduce the sugar in the shortbread and eliminate the sugar from the peaches 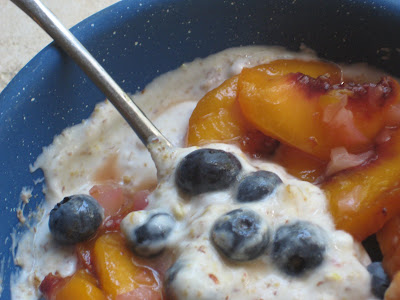 ... The leftover ginger-lime peaches were yummy stirred with yogurt, blueberries and flaxmeal for lunch the next day.
Posted by Nancy/n.o.e at 6:20 PM

Mmm they look and sound yummy!

These look fantastic! Your peach/lime/candied ginger picture is phenomenal. I want to be in your book club!

Someone passed a really nice blogging award on to me, and I wanted to share it with you, since I love your blog. You can click onto my blog under "Thank you, Jamie!" to get it. :-)

Mmm, sounds very yummy. the puff/spread thing is always a gamble isn't it! When you want puffs, you get spreads and you can guarantee if you want it to spread it will puff!!