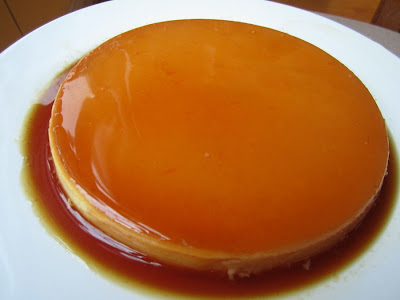 Flan was on the menu four years ago this week for the Tuesdays With Dorie bakers, and it was on my menu in my quest to bake all the TWD recipes that were baked before I joined the group.  Flan is one of those order-at-a-restaurant treats for my family, and I was interested to see how it would work in my kitchen.

Dorie's recipe for Caramel Topped Flan is one of those mysterious recipes: you put everything in the baking dish and bake the flan and when you unmold it you have a lovely custard which through the magic of baking ends up covered in a delightful caramel sauce formed from the ingredients you put in the bottom of the flan dish.  Of course, as will all upside-down desserts, you never really know how it's going to turn out until it comes out of the pan! 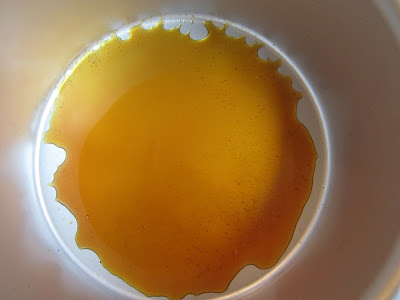 -  Steph, of A Whisk and a Spoon has the recipe here:

-  The first step in this recipe is to make caramel which is then spread - evenly, Dorie emphasizes - into the bottom of the cake pan.  My caramel kept pulling away from the edges of the pan; you can see from the picture above how that ended up looking.

-  Next, I mixed the custard, poured it into the pan, then baked it in a water bath in the oven until the custard was set.

-  The final step was unmolding the flan, flipping it onto a serving plate, leaving room for the caramel sauce to run down and pool around the edges of the flan. I was a little concerned that the magic wouldn't work, but the flan turned out perfectly.

This flan was every bit as tasty, and tastier even, than the versions that we order when we eat out.  We savored every spoonful.  Who knew that making fabulous flan at home could be so easy?
Posted by Nancy/n.o.e at 6:58 PM

I'll confess that flan isn't really my thing, but that stunning layer of caramel on top? Oh yes, I'll take some of that :) Seriously gorgeous Nancy!

I really wish that I liked custards, because that looks really pretty. =) Maybe I'll make a small version like yours for J, since he does like flan.

Your flan is a thing of beauty, Nancy! I chickened out and didn't get my caramel dark enough, but yours looks absolutely perfect!

Gorgeous and I so could have eaten two portions of this with no problem at all...love love love flan. Purposely not learning to make it...would be way too dangerous to be able to whip that up on a whim!

Gorgeous! The color of the caramel and everything. Great job. :)

That looks so good!! The caramel looks perfect. I bet it tasted even better than it looks!

I remember how fun this was to make and how good it was to eat.

Nancy, your flan is a treat for the eyes. I suspect this is as tasty as it is beautiful. This is my first visit to your blog, but I will be back.I really like the food and recipes you share and I enjoyed the time I spent here. Have a wonderful day. Blessings...Mary