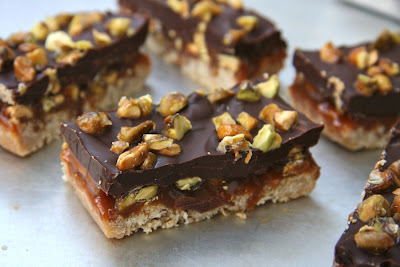 Four years ago today the Tuesdays With Dorie bakers posted Snickery Squares, a shortbread-based bar that contains the flavors of the world's most popular candy bar: caramel+chocolate+peanuts.  I'm on a mission to make up the all the TWD recipes that were chosen in the early part of 2008 before I joined the group.

The recipe is one that I've wanted to taste for a long time because (1) the picture in the book (Dorie Greenspan's Baking From My Home to Yours) is very very inviting, and (2) I have heard good things about these bars from those who baked them before me.  What has kept me from baking the bars?  Four elements to prepare and then layer.  I usually default to an easier recipe.

When I saw that the bars were coming up in the list of TWD recipes, I included them as part of my pre-Lenten flurry of baking sweet treats. 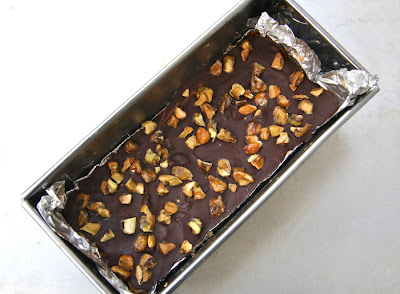 -  The Snickery Squares were chosen and hosted by Erin of the blog  Dinner and Dessert.  You can find the recipe on her post.

-  The recipe gives direction for three elements - caramelized peanuts, shortbread, and chocolate topping - and specifies store-bought dulce de leche for the fourth.  As it turned out, only one of the four elements was prepared as directed by Dorie's recipe!

-  I did not use the dulce de leche but instead located some homemade caramel in my freezer and used it for the bars.  I had made the caramel from a recipe in the book Baked Explorations and it was a really intense, smoky batch of thick caramel.

- As I've shared in a previous TWD caramel+chocolate+peanut recipe, I don't really care for peanuts and chocolate.  This week, rather than peanuts, I used roasted, salted pistachios, which I caramelized according to the recipe's directions for preparing peanuts.

-  I wanted to experiment with a gluten-free version shortbread as a base for these bard.  I tried a recipe from Alice Medrich's cookie book.  I've never had a failure with a Medrich recipe, so I had high hopes for this shortbread crust.  The dough was not difficult to put together and the crust baked up to a nice, firm cookie that held together beautifully.

I found the combination of rich shortbread, good caramel, dark chocolate and crunchy candied pistachios in these bars to be out of this world.  Two tasters joined me for these bars.  One loved them and one didn't card for the caramel.  I'm guessing she would have loved them had I used dulce de leche.

I enjoyed the bars so much that I put some in the freezer for an after-Lent indulgence!  As much as I enjoyed this recipe, I am equally excited to find a gluten-free shortbread recipe to use as a base for other cookies and even for tarts.

Oh, Nancy, those look so divine!!! I will be looking for that recipe when I get home today. :)

These have been on to my to-do list forever, thanks in large part to that photo in the book! I think I've been putting them off because I don't like peanuts much, but I'm sure I can find an acceptable substitute. Your bars are perfection Nancy!

I like your substitutions and I remember these being tasty as written. I'd like to try them again one day.

Oh, these look like just the thing that will transport to IU well...thanks for the reminder. Nice job of it all.