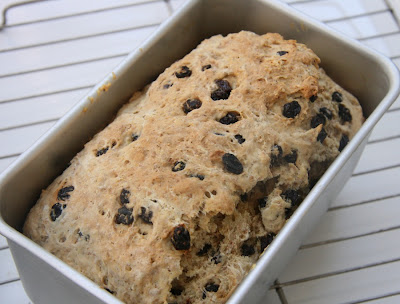 In honor of St. Patrick's day, the Tuesdays With Dorie baking group baked Irish Soda Bread as the second March recipe.   The group chooses one easy recipe each month from the book Baking With Julia, and one that's a bit more involved.  The soda bread is the easy one, and, folks, it doesn't get any easier than this: 4 ingredients and a minute of kneading and it's ready for the oven!

-  Julia's contributing baker for the soda bread is Marion Cunningham; you can find her recipe on either of the host blogs this week:


Carla of Chocolate Moosey put dried cherries in her bread

Cathy of My Culinary Mission  made a gruyere version


-  Although the most traditional form of soda bread is plain, the recipe suggest adding currants so that's what I did.

-  I baked a half recipe, yielding one smallish loaf.

-  For one quarter of the flour I used Irish Style Wholemeal Flour from King Arthur Flour.  How could I not?  I had it on hand and it even has Irish in its name!  I love the slightly rough texture and full flavor of this flour.

-  I've learned from my yeast bread baking (thanks to British bread baker extraordinaire Dan Lepard) to knead the dough on an oiled rather than a floured counter.   For the soda bread, I used walnut oil, figuring it wouldn't hurt to add a bit of nutty flavor while I was conditioning the dough.

-  Soda bread is usually baked as a hearth loaf, but around my house bread made in loaf pans is the preferred type when it's destined for toasting, as this was.  So I used a medium-sized loaf pan.  The bread baked for 35 minutes at 375 degrees.

Eaten fresh and barely cooled from the oven, this bread was delicious: tender, nutty from the wholemeal, with little pops of sweet fruitiness from the currants.  I ate it spread with salted butter and my husband toasted it then buttered it.  Although the recipe indicates otherwise, we found the bread to be a decent "keeper." We both liked the bread, and you absolutely cannot beat the ease of preparation.

Glad you liked it! An I learned not to knead the bread, just stirring together

Wasn't this good? I wasn't expecting much, to be honest, but I should have known better because of its origins. I was nibbling on my half-loaf all day, and it was sensational toasted. I was even wishing I had some of that Irish flour...next time.

Your irish loaf looks great! You always have such great tips. I'll have to try the oiled surface tip the next time I knead bread.

I need to put raisins in my next batch. This would make terrific raisin bread.

I like the idea of using walnut oil while conditioning the bread. I'd like a bag of that Irish-style flour, too.

Yea for currants! Did the same and added orange zest - I'm such a rogue baker.... Looks wonderful Nancy! I made half a loaf too - perfect size. Great idea on the oil - will have to try that!

Walnut oil! What a great idea. I like oil rather than flour, too, for kneading. This was so buttery good and still tood today.

i like that you baked it in a loaf...i could hardly fit my slices in the toaster!

I'm making this for breakfast right now, and blatantly stealing your tips. =) I picked up a couple of small loaf pans last week–they look about the same size as yours. I need to order more whole meal flour, too.

Irish flour was the perfect choice! It looks lovely. I have never made it in a pan before...I like the look of it.

Great idea to use your KAF Wholemeal flour. I THOUGHT about it, but that's as far as it got. I made mine as a round free-form loaf, but it would have been so much better as a loaf. Isn't it great all the things you've learned over the years from baking bread?