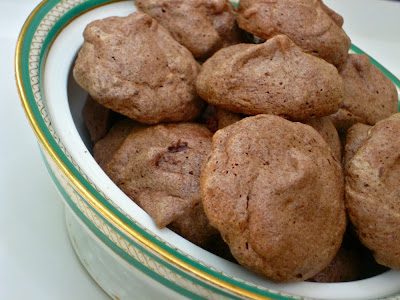 Those of us who make ice cream on a regular basis - say, for the sake of example, once or twice a week - are absolutely thrilled to have something to do with the egg whites that accumulate as by-products when the yolks are used for the typical custard base. I'm always adding some extra whites to scrambled eggs, but a good many egg whites have taken up semi-permanent residence in zipper bags in my freezer.

This week's assigned recipe for the Tuesdays With Dorie baking group is Cocoa Almond Meringues, and meringues signify one thing to me: "egg whites"! I was more than excited to pull out a frozen bag of egg whites, but a good bit less excited when I discovered that the bag had leaked as it thawed, and there were egg whites oozing all over my kitchen counter. Thanks to the magic of paper towels, that was just a minor setback.

- Mike of Ugly Food for an Ugly Dude chose the meringue recipe, and you can click over to his blog for the recipe.

- I've made meringues and I know that they bake in a relatively cool oven for a relatively long amount of time until they are relatively completely dry through and through. Sometimes they will be dry on the outside but still soft inside, which means to bake them a little longer and test them again.

- These meringues were different for me. I followed the directions exactly and at the end of the prescribed time, the meringues were soft to the touch. On the outside. So I baked them for an extra 15 minutes, then left them in oven as it cooled.

- As they baked, my meringues didn't get bumpy and cracked like the picture in Dorie's book. Instead they flattened and smoothed out. Their insides stayed soft, and even a bit gooey. I'm suspecting that although Dorie says "their interiors are wonderfully chewy and their flavor a bit caramelish, slightly nutty and quite chocolaty," mine might have been a bit more chewy than she intended. It's possible that the summer humidity might have been a factory, but our house is fully air conditioned, and it's pretty dry in our house. 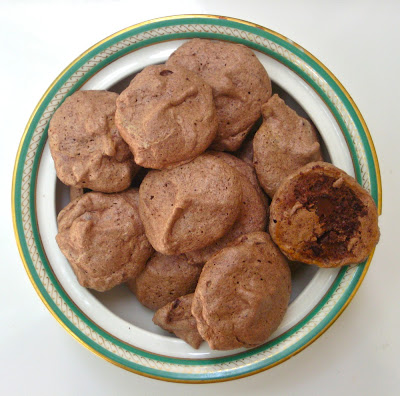 I must admit that I wasn't particularly disappointed that the meringues that came out of my oven were not particularly meringue-like. Chewy cookies are my very favorite kind, and these were wonderful. I kept sampling them until I finally put them in a zipper bag and froze them (although I soon found that they are even better straight from the freezer!)
Posted by Nancy/n.o.e at 12:01 AM

Ha! Ha! U'd be eating them straight from the freezer too!

I have to try them frozen now- yum! Your meringues look perfect!

Mine were just a tiny bit chewy in the center, which I thought was perfect. I really loved these!

frozen meringues--who knew? wish i had some more so i could try that out!

I like your freezer idea. I have some cookie dough balls in the freezer. They taste better in their frozen state than they do cooked. Sad.
This is the first time making meringues, I was pleasantly surprised. They were delish. Now I think I will make some ice cream!
Have a great week.

I'll definitely have to make these at some point, so I can get some more egg whites out of my freezer. and I'm with you--I prefer chewy cookies.

You always have the most interesting incidents over there...never know what I am going to find when I check in and read the entry. I need to make these when my chocolate loving son gets back from CA as I know he would love these, crunchy, chewy, chocolate, oh yeah. I have lots of whites as well.

No matter what they look like, yada yada yada. But they were quite tasty. Will remember the freezer tip. Frozen meringues. too bad all mine are gone now.

I make meringues often but never with cocoa & almond, I need to try this recipe. Even in an air conditioned home with the humidity (or on a rainy day) it does affect the meringues and they will never set up properly. Love your freezer tip, if they last long enough I'll give that a try too.