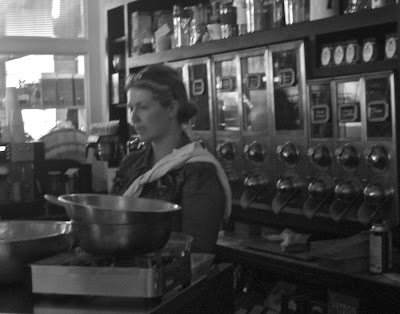 I first learned of Jeni's ice cream from Tim Gaddis, the cheesemonger at the specialty market Star Provisions. Tim tweets as @Timthecheeseman, and his dairy cases hold many wondrous products, including ice cream from Jeni's Splendid Ice Cream, based in Columbus, Ohio.

Soon after, my bloggy buddy Di, who lives in Austin, Texas, began singing the praises of Jeni's ice cream, which she sampled on a family vacation to Ohio, and of Jeni's recipes. (At last count Di has made 9 or 10 flavors!)

So when I saw this tweet from Tim on Tuesday:

I mentally re-arranged my plans for the day so that I could stop by. It wasn't too hard; luckily Star Provisions is just a couple of miles from my house. I came in a few minutes after 4 to find that Jeni was doing a demonstration. She was in the darkest corner of a large room not known for being light, so photography was difficult. Additionally my good camera had gone to Yosemite with my brother, so I was left with a point and shoot. All to say "excuse the quality of these photos."

A woman standing near me already had the book and was very enthusiastic about Jeni's method. "The base is very versatile. Very neutral in flavor," she enthused.

Jeni did a wonderful job of introducing her operation, her ice cream, and her book. She has devised an unusual formula for her ice cream base. As she spoke, it became clear that every part of the recipe has a specific job and reason for being there, often related to texture or stability.

Jeni's story is interesting. Originally an art major, Jeni went from selling ice cream solo at a market in Columbus to today's operation with several shops, numerous other places that carry her ice cream (including Anthropologie stores) and 250+ employees. Even though the company has grown, everything - production, packing, labels - is still done by hand.

I loved the way Jeni described her relationship with local fruit growers and dairy. She uses milk from grass fed cows - raw milk that can be traced back to particular cows. She pasteurizes the milk one time, at very low temperatures. You and I might like the nutritional benefits from her methods, but from Jeni's perspective, everything she does contributes to one goal: flavor.

After hearing Jeni speak, sampling some of her ice cream (delicious!), and buying some of her books (she signed them in hot pink Sharpie!), I was so excited that I came home and immediately started making a double batch of vanilla ice cream. 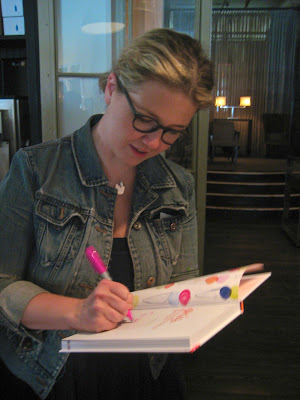 - Jeni's ice cream is different, in that it is not custard-based. No eggs. Nor is it a plain Philadelphia-style either. Jeni makes her base by heating milk, cream, sugar and a bit of corn syrup, then thickening with cornstarch (similar to how a pudding is made) before whisking the hot thickened liquid into some cream cheese. The whole mixture is chilled; Jeni instructs us to put the ice cream base in a zippered plastic bag placed in an ice bath. Once cooled, the base can be churned in an ice cream maker. Jeni demonstrated by making vanilla ice cream in a small 1 quart Cuisinart ice cream maker (which was raffled off to an audience member!)

- You can find the vanilla ice cream recipe here.

- Jeni uses Ugandan vanilla beans, but I used some beautiful ones that I'd ordered online recently. I usually rub the vanilla seeds into the sugar to keep them from clumping together but this time I forgot. As it turned out, with all of the whisking in this recipe, the seeds separated and were dispersed nicely.

- I really made a serious mistake in preparing this ice cream. I started out fine, mixing up and setting aside the slurry, whisking and setting aside the cream cheese, and then heating the rest of the ingredients. But things went off the rails when I forgot to add the slurry to thicken the base. By the time I realized it, I had already added the cream cheese and put it all in a zipper bag in an ice bath. Then I remembered the corn starch slurry. What followed was a frantic session of dumping the liquid back into the pan and reheating it with the slurry to try to thicken it. That wasn't particularly successful; the cream cheese and some of the cornstarch preferred to stick to the bottom of the pan.

- Another, more minor problem, was the zipper bag. When I first put the ice cream base in the bag, it sprang a leak and I had to quickly put it all into another bag. I then emptied the bags in an effort to fix my ice cream base, and when it came time for the ice bath (again) I skipped the plastic bag method. I chilled the base in my usual manner: poured it into a metal bowl set into a bigger bowl of ice water, cooled for a bit then placed into the fridge to cool further. When the base was below 50 degrees I churned it. 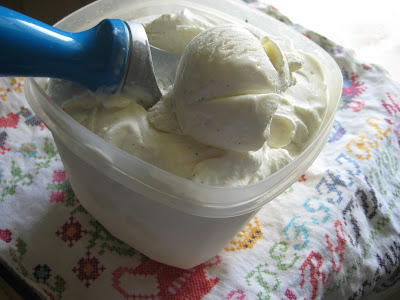 yes, I realize this is the third post in a row where ice cream is pictured in a square plastic container!


- Although I'm pretty sure that the majority of the cornstarch thickener and the cream cheese was left on the bottom of my saucepan because of my mistakes in following directions, the ice cream churned up surprisingly well.

- The double batch of ice cream base filled my 2 qt ice cream maker pretty completely, and as it churned, the ice cream expanded over the brim. There would have been even more volume had I not left some of the base by the wayside as I transferred and re-transferred it from pan to bag and back again and then lost some in the bottom of the saucepan. Next time I'll make no more than 1.5 recipe.

To begin with, I couldn't believe how white this vanilla ice cream was. I suppose this was from the lack of egg yolks. All of the ingredients I used were white (and no vanilla extract) although Jeni told us that the milk she uses is from grass-fed cows and it's yellow.

As for taste, the ice cream has a fresh, clear flavor. The corn syrup and cream cheese keep it from being thin or icy, in fact the texture is actually a bit fluffy. It's quite different from the muddled, rich, taste of a custard-based vanilla ice cream. My vanilla-ice-cream-loving husband really enjoyed the ice cream, which is a good thing, seeing as we have 2 quarts of it!

Now I can't wait to try some of the other flavors in the cookbook! 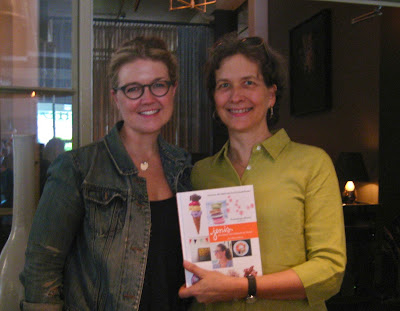 Loved this post, Nancy! I hadn't heard of Jeni until Di started talking about her, so it's fun to hear all about her history and her methods. (Although I did realize that I'd accidentally tried one of her recipes recently - before realizing who she was.) Glad to know the ice cream was a hit, even with the mishaps. =)

How fun! It all sounds very interesting and I should check into this...no eggs, what a great deal, no more whites/yolks hanging around for odd moments! Love the photo of the two of you...so cute!

When there is food mentioned I would be there!

What a fun event! I need to check my library and see if I can get my hands on a copy of this book, I'm really intrigued by the base recipe.

Ok, that seals it - I have to get this book! Picked a salty caramel recipe from Bon Appetit - but really want the book! What fun Nancy! How lucky you are to go, meet and get the book signed! To justify the purchase, I have almost made all of DL's recipes... SO, I need another ice cream book!

Hi Nancy, very nice to find your blog through Di's Sundae roundup! The ice cream looks great and that cookbook would round out my collection. Thanks!

I need to try one of those. So funny you just wrote about Jeni...I just ordered her ice cream for my little sister last week as a "Recover from Tonsil Surgery Treat."