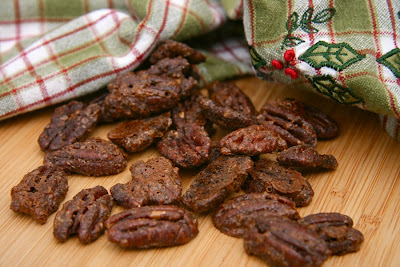 It's Friday, the day that cooks and bloggers scattered around the globe post food they've prepared from Dorie Greenspan's book Around My French Table as part of the French Fridays With Dorie cooking group. Each month there is a list of recipes, and we can cook and post them in any order, as we have the time and inclination. This week I've chosen to post the Sweet and Spicy Nuts. According to Dorie, the French are most likely to serve something simple, such as nuts, along with drinks. And whether you are French or not, these nuts are the perfect nibbles to serve at a party, making this just the thing to post for New Year's Eve!


The first time I made these nuts was back in November when I attended an event in Madison, Connecticut, where Dorie read excerpts from her book and gave a little talk before giving each member of the audience personal attention as she signed our cookbooks. Dorie was, of course, utterly charming, and meeting her was a highlight of 2010 for me.


I knew that I wanted to bring something edible to the book signing for Dorie. My initial thought was, "Oh, I know, I'll make something from Dorie's book." I chose the nuts, because they would travel well, and didn't really realize how daunting it was - to cook Dorie's own food to serve to Dorie herself - until the nuts were already in the oven.


[edited to add: you can find the recipe for the Sweet and Spicy Cocktail Nuts on Dorie's blog]

- I used pecans, because I wanted to have something from my home state of Georgia for Dorie.


- Although Dorie gives lots of possible variations on seasonings for the nuts, I used the chili powder as specified in the main recipe.


- The nuts are quite easy to prepare. First you mix the nuts with egg whites then coat them with sugar and spice mixture. Then the nuts are baked until they are dry and a bit browned.


- I substituted palm sugar for the granulated white sugar.


- Pecans have lots of little crevices that catch and hold the egg whites and spices.

- It's a bit tedious to take each nut out of the seasoning and place it individually onto the baking sheet, but Dorie says that's how it's done, so I did it.

- There was a good bit of egg whites and spices left in the bowl, so I tossed in some more pecans and coated them also.

- I've also made this recipe with almonds and curry powder, pictured below. 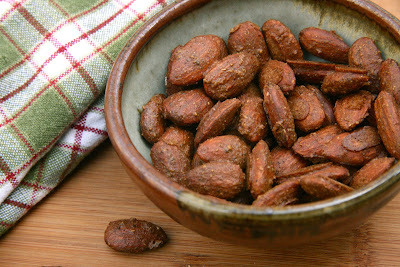 
Maybe it's as surreal for Dorie to taste her recipes, but cooked by other people, as it is for us to make her recipes and have her taste the results? Any musing along that line, however, was rendered irrelevant by the graciousness of Dorie. "Oh, these are good," she said, "your nuts are so nice and separate; mine always stick together." I had to laugh, "Dorie, I just placed them individually, as you said to do!" And then I had to admit that I'd changed the recipe by substituting the kind of sugar, although, the nuts were delicious that way. Unfortunately, in all the excitement, I didn't take a single picture of those pecans.

My next batch, the almonds with curry, was also quite good. The third time I made the nuts, I went back to the pecan/chili powder combination. These got just a tad too toasty in the oven, as you can see in the top picture, but luckily were still enjoyed by all.

This is such a great recipe! I can't wait to try more variations. I took pecans to Dorie when she was here, too, but mine were in the form of pralines. =) (Same thought--wanted to give her something local to central TX, but decided against using one of her recipes.)

I love your story about Dorie's reaction...it sounds just like her!

I hope your new year is equally sweet!
Audrey

How fun (and a little stressful) to share Dorie's nuts with Dorie! Good for you, they look terrific. And good for you for separating them! I just didn't have the patience to do it (but I keep making double batches, so it's just too many nuts to handle individually). Happy New Year!

I loved these and ate every last one till they were mere crumbs :). Happy New Year to you and your family!

This is a great recipe - I filled some bottles with them and gave them as gifts this year. I separated them as directed, too and it was worth the effort.

Dorie sounds like a very gracious person. It's lovely that you got to meet her.

Those look great, and very un-stuck together! I can so see you doing the one by one thing. I would do five and then toss the whole thing on the cookie sheet. No patience here. Love the story of the interaction with Dorie...I was grinning the whole time I read it to think of you two chatting. So like you to take a gift!!

Seeing your nuts brings back memories of the night with Dorie - so much fun! It seems like it was so long ago, even though I guess it was just a few months.

Although the almonds sound good, my heart belongs to pecans so I bet they were even more delicious. You are brave taking one of Dorie's own creations to her, but with your skills, it wasn't a gamble.

Nuts are great in the winter, especially when they're spicy!