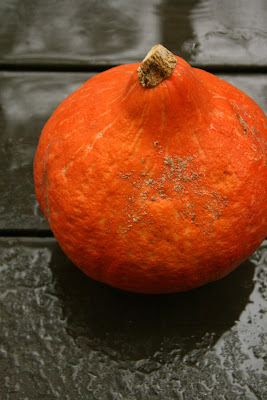 Back when I began my blog I might have - rashly - thought that of course I'd still be blogging 29 months later, but from my current vantage point I'm a bit surprised that I'm still at it, writing, photographing, and posting the food that I prepare and that we eat. And although I was tempted to reach back into my stack of draft blog posts - my backlog hovers at around 150 posts at varying stages of readiness, for this my 400th post I will feature a recipe that I made yesterday.

At dinner last evening I was telling my family that my next post would be my blog's 400th and that I was unsure which recipe to use. My husband stopped, soup spoon halfway to his mouth and said, "Post this soup." So here it is, Red Kuri Squash Soup from Dorie Greenspan's newest book, Around My French Table. And really, it's only fitting that I use a recipe of Dorie's because it is her previous book, Baking From My Home to Yours and the baking group Tuesdays With Dorie that got me started on the whole blogging enterprise. 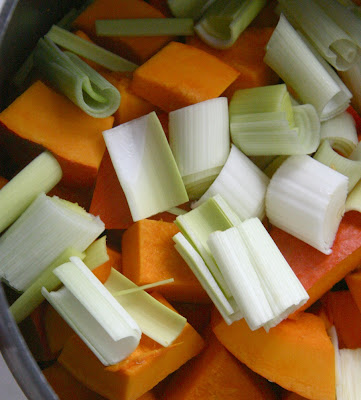 I'll be honest, here. Before today I'd never eaten kuri squash in my life. But it was pretty much a mission for me this fall. When cool weather hits, or when it hits places that have cool weather, the food world fairly explodes with recipes for winter squashes: butternut, pumpkin, acorn, and lesser known types such as kabocha, delicata, and kuri.

I was walking through the produce section of Whole Foods a few weeks ago and pounced when I saw a display of kuri squash. Luckily winter squash has a long shelf life, even if that shelf happens to be my kitchen counter, and yesterday's stormy weather gave me just the excuse to cut into that kuri and make some soup.

- The soup is beyond simple to make. Dorie shared the method in this post on her blog.

- The recipe calls for simmering the squash and some leeks in equal parts of milk and water. Luckily I had some leeks in the fridge, but I was running a bit short on milk. It was far too cozy and dry in my house for a run to the grocery store, so I mixed in a lot of half-and-half, a bit of milk, and some water. A little extra butterfat never hurt a soup. I'm sure the French would agree.

- After half an hour or so of simmering, I used my immersion blender to puree the soup right in the 4 quart soup pot. There was at least 2 quarts of soup, and given that two of the three humans in our household don't care for squash, I was pretty sure I'd be giving away several pints of soup. 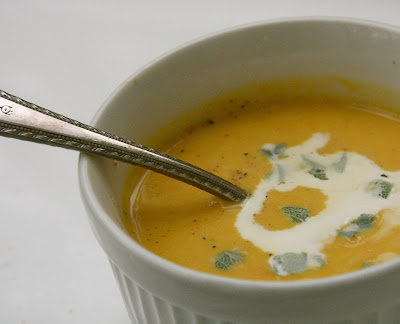 My daughter wandered into the kitchen as I was pureeing the soup and readying it for its photo session. We had a late afternoon soup snack together. Her reaction? "Mom, I love this soup. Don't give any of it away."

A couple of hours later, when dinner time rolled around, my daughter asked for soup. Then my husband requested a bowl. After he tasted it, I thought I heard him say, "This is really rich." I must have had the half and half substitution on the brain because he really said, "This is really good!"

So there you have it: my two squash-haters loved this simple, easy soup. I think you will too; it is smooth in texture and flavor. The nutty flavor of the kuri comes through and is perfectly accented by a bit of nutmeg and black pepper. That big vat of soup will disappear in short order, as I can see it on the lunch, snack, and dinner menu for the next several days. And I envision licking the bowl when the last drop has been served.

In honor of my 400th post, I am going to make a donation to the Atlanta Community Food Bank, so that others in my community might be able to eat.
Posted by Nancy/n.o.e at 4:30 PM

Oh, cool. I'm proud to be the first person to comment on your beautiful soup, and your beautiful blog's 400th recipe. Thanks for being such an inspiring cook and blogging friend. I'm looking forward to the next 400!
Audrey

400 posts is quite an achievement. Thanks to Dorie for introducing us to you thru' her great books. I always enjoy your wisdom when it comes to different recipes and their variations. I have learned a lot from them. Thanks for staying with it when you had your doubts a few months back.

Oh, and the soup looks wonderfully comforting and warm....

Cyberspace is a better place because you're in it.

Congratulations Nancy! 400 posts is a huge accomplishment. I'm so glad we've become blogging buddies, and that we even got to meet this year! Your posts are always a learning experience for me, hope you'll keep at it for another 400 :)

Congrats on this important milestone Nancy. Looking forward to the next 400.

Wow, 400! Congratulations. =) I've seen red kuri squash at Central Market; I'll have to see if they still have some when I shop tomorrow night. If so, I'm definitely making this soup next week!

Hugs and Congrats on 400 posts. I have to say that I love the NOE notes and your comments make me a better baker and cook. Here's to the next 400!

This soup looks gorgeous! i love winter squash, but haven't seen red kuri around here. Congratulations on your 400th post, and your contribution to a food bank is a wonderful thing to do.
:)

400 wonderfully insightful and educating posts for all of us...congratulations to US!! Thanks! Soup looks wonderful, still chuckling at her saying not to give any of it away...too cute, esp. knowing your penchant for feeding the city of Atlanta and then some. You. Must. Keep. Blogging. We would miss it too much if you did not.

I bought on of these at Whole Foods this weekend. Definitely going to make the soup. Thanks for the review!

Thanks for posting about this soup - my family actually likes squash so now I want to try it. Your kuri squash was gorgeous!