Brussels Sprouts with Bacon and Shallots 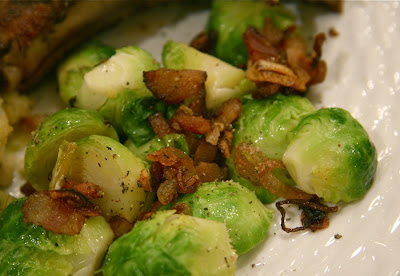 If Christmas can be said to have a vegetable, I think the honor would go to brussels sprouts. They are a fabulous winter accompaniment to a hearty meal, but they rarely get to play a memorable role. This recipe for Skillet-Braised Brussels Sprouts with Bacon and Shallots, from the The America's Test Kitchen Family Cookbook, just might change that. With bacon and bits of caramelized shallots, brussels sprouts get gussied up for the holiday (but they're just as comfortable at a weekday family meal.)

- The recipe, which I've included below, is pretty simple:

- I used Benton's bacon, and because it is so strong in smoky flavor, I used a little less than the recipe specified.

- I found that my sprouts cooked a bit quicker than the recipe advises, so my advice is to watch them carefully - the first time I made this, they were almost overcooked. Since I like a little more crispness to the sprouts, I've reduced the cooking time.

1. Cook bacon and shallots together in skillet over medium heat about 10 min. Transfer to paper towels to drain.

3. Uncover skillet and cook until the liquid has evaporated and sprouts are tender, about 5 minutes or less.

4. Remove from heat, and stir in bacon and shallots, butter and vinegar. Season with salt and pepper as needed.
Posted by Nancy/n.o.e at 8:57 AM

Brussle sprouts are always linked to Christmas in my mind with turkey and gravy not far behind. Have a joyous Christmas season.

Yum. I had brussels sprouts w bacon at Michy's in Miami and have been searching for a good recipe ever since..thanks :0.

Yum! I discovered brussels sprouts last winter but haven't tried them with bacon yet. It sounds delicious, though I doubt it'll help me convince Shane to eat them...

My favorite vegetable all dressed up...I swear, I make Brussels Sprouts all the time as a snack b/c I love them so much. Will try this recipe, looks like a winner to me.